THE BOYS ARE BACK IN TOWN!

Friday and it was the weekend. Yaaaay!
My mate Libido Boy (who was one of the best men at my wedding last December) hit town, as we were due to go to a gig. Not seen him this year so far so was really looking forward to it.
We headed off for the Union Chapel, a beautiful venue in London's Islington to see the fabulous Roseanne Cash.
The way these evenings usually go is he arrives, then we have to um and ah about what shoes he is going to wear. He is in the leather trade, so footwear is very important to him. The rest of him may look a mess at times but his shoes are always immaculate. Then we have to decide if we are hungry or not, as we won't be eating anything apart from salty snacks until the post-pub burger at around 2AM.

This time hunger was decided upon, so we went to an Italian place and as usual I got olive oil down the front of my shirt.

The Union Chapel is a gorgeous venue for this type of concert. It was going to be a quiet acoustic night with Roseanne and her husband John Leventhal on guitar.

First on were two young lads called "Winter Mountain", who came across as nice young chaps but seemed to me to be a wannabe Simon and Garfunkel without either the songs or the beauty of the harmonies. LBoy liked then and they got a warm round of applause, so it may have just been my cynical jaded ears.

Then during the interval we had a rock n' roll ice cream each. (It is that sort of venue). I had chocolate. Lboy went mad with a vanilla tub. 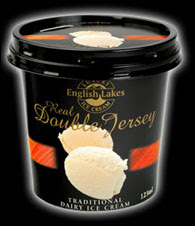 He also is unable to see a woman without chatting to her. Turns out she was the wife of Simon Nicol from Fairport Convention, who was sitting next to her. We talked and found out we had friends in common. Then the main event. 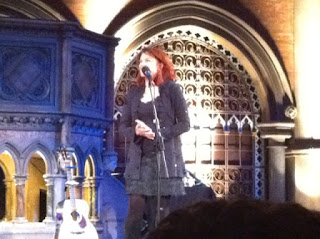 From the moment they walked on stage we were rapt. I had forgotten how good a singer she was and at 57 years of age has not withered at all. 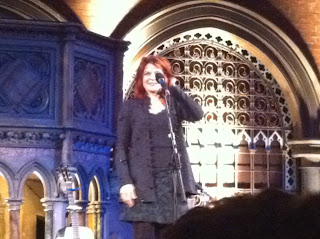 She ran through a lot of songs from her album "Black Cadillac" and the more recent "The List", including "Sea of Heartbreak" which I played on the show Monday morning.

She even did a killer version of "Ode To Billie Joe", the Bobbie Gentry song of which I am not a particular fan, although I certainly warmed to it after her version particularly as she mentioned at the end that she had no idea what they had thrown of the Tallahatchee Bridge either. Which was gratifying as it has baffled me for years too.

We wondered if there would be any Johnny Cash songs in the set, and when the audience called out for some she neatly sidestepped it politely and rather cleverly with the words: 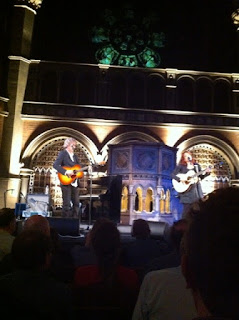 All in all a perfect evening. Beautiful music performed with enthusiasm and humour. What more could two middle aged men full of pasta and ice cream ask for?

We hopped into a cab and headed for Camden, and a pub we always go to called "The Elephant's Head", although for some bizarre reason that always comes out of the Dark Lady's mouth as "The Blue Elephant".

At this stage in the evening Libido Boy starts to worry about his salt intake and I get concerned about my liver. 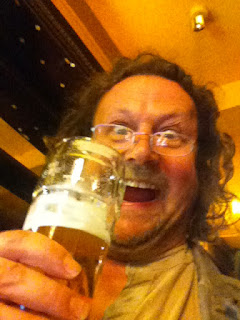 The reason is that LBoy likes a packet of crisps with every drink. I just like a few pints.

Bearing in mind that scarcely if not a drop passes my lips during the week these days, I felt that we should push the boat out on this a special occasion.

DL, who naturally worries about her idiot husband, did text and ask how the "hevvvy drinking" was going. So I had to send her a picture to show that we weren't getting into any trouble. Unlikely, as apart from the guy on the wheels of steel we are probably the oldest people in this pub by 30 years. After the obligatory burger from a street vendor and the boozy walk home that was it for a perfect evening. Got into bed about 3.00 am and woke up on the dot of 7!
Posted by Alex Lester at 09:24

Have you two thought about staring in horror movies (for kids) .... you would send them hiding at the back of the settee in fear!
Hisss hisssss

Ah - sounds like a cracking night out in great company.

Libido Boy, eh? Is he one in the "Marvel Superhero" classic comic mould? Or just a dodgy ol' perv...?!

Either way, he sounds like a great laugh to have a few beers with at a top gig. I'm guessing his Best Man speech wasn't too grotesque... ;-)