ONE AND ONE IS TWO

Here we are back with the daily(ish) blog after the Xmas and New Year festivities so I will quickly (for me) wrap up the last bits of the weeding and the honeymoon and then it will be headlong into 2012 and all that it may bring.

After the wedding and the reception, which was the most amazing day (You can see a montage of events on the link which the fabulous photographer Neale James has done for us by clicking here. Hankies ready though, it does it for us every time). When Edwina Hayes started to sing it finished everyone off so Glenda the registrar had to hand out tissues to the assemble throng.

After what seemed a decent interval we retired to bed (a fancy four-poster!) and had about three hours before we had to get up and set off for the airport. As we lay there mulling over the days events (filthy-minded readers may use this is a euphemism), we were aware that our room was directly above the bar area. So we listened to Clive, Matthew and Hirsty, among others, pontificating about life, the universe and everything from beneath our bed which was rather an unnerving experience. It was almost as if they were in the room with us! Had any of them uttered the words "left 'and dahn a bit" we would have called the cops. 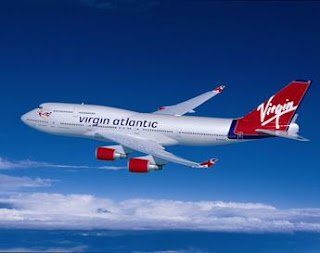 A very early start and off to Heathrow. When we arrived and we walked towards the check-in desk, the Dark Lady grabbed me by the shoulders and steered me towards the Upper Class check-in; she had been saving all year to spring this surprise on me.

CLANG! This was the sound my jaw made as it hit the ground. I have only really been economy before. This was a whole different experience and one that I doubt I will experience again but it has spoiled me for air travel from now on. 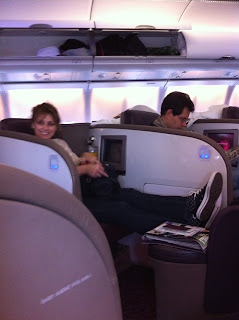 We rented the same apartment in New York where we had been the previous year and DL had been wondering why I was so concerned that the rain stayed away. The following day dawned bright and sunny so I suggested a walk in Central Park. A few minutes and we were at the Wollman outdoor ice rink.

She has always wanted to skate in Central Park and little did she know I had been having secret skating lessons. (You can see the results on my Facebook page).

"If you want to, but don't worry! I don't want you falling and hurting yourself!"

"Oh alright. I'll give it a go. You go on ahead and I'll just hang around the edge clutching the barrier" 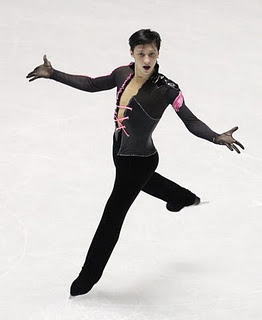 We were only in New York for a week but we had the best time.

DL bought tickets for Jersey Boys which was wonderful and spectacularly sweary which I wasn't expecting but was delighted by. A notice in the foyer warned:

"Genuine New Jersey Language is used at this performance" 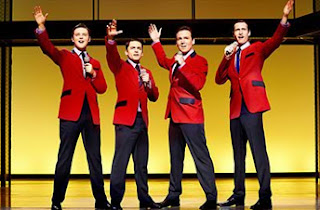 We walked all over the place in the wind and the rain. We walked the High Line. Visited Katz's Deli where "that scene" from the film When Harry met Sally was shot and was delighted that it wasn't a tourist trap. Visited the Tenement Museum and was horrified at the conditions people lived under. Skated a few more times. Went to the Radio City Music Hall Christmas Spectacular. Which it was. 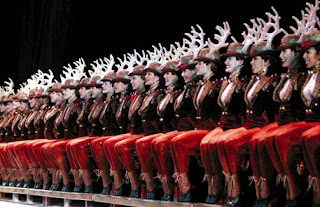 Then on the penultimate night I surprised "the wife" with tickets to The Book of Mormon, a show which has won 9 Tony awards and is sold out for months. We saw it mid-December and I bought the tickets the previous July. It was howlingly funny. The songs were brilliant and it was one of the rudest shows in the most dubious taste I think I have ever witnessed. Not entirely sure of the accuracy of some of the religious statements but from what little I know, the sight of one of the Elders kneeling in front of Adolf Hitler performing a (Tabloid euphemism coming up) "sex act" on him whilst surrounded by dancing coffee cups in a number entitled "Mormon Hell Dream", I think it would give any self-respecting member of the Church of Jesus Christ and Latter Day Saints pause to consider their belief. However, having said that no one ever said "Faith" was logical.

We had the most wonderful time and it all went so wonderfully well we thought it would be nice to get married again every so often. Same person I hasten to point out. If she'd have me. I fancy a Las Vegas Elvis job next time! 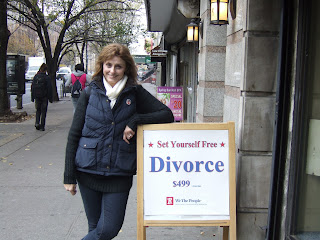 One of the most romantic things I've ever read. Really. Didn't think things like that happened in real life. Well done to both of you!

Oh how lovely, sat here amidst piles of kleenex now .. what brilliant photos and video :)
Thank you for sharing