JUST LOOK AT THEM BOOTS!

It always amazes me how long it takes before things settle down to normal after Christmas and New Year.

Every year we grumble about how Christmas is starting earlier and earlier and yet not sure we make the same distinction with the post-New Year period.

As I outlined yesterday being a bit of a curmudgeon and having suffered from curmudegeonliness for many years now, I quite like the year as it runs without any sudden changes brought on by Bank holidays and Festivities.

Before you leap down my throat at my lack of joy I may tell you that I am trying to get Curmudgeon classified as a bona fide medical condition.

"What is it Doctor"?

"Bad news....I'm afraid you are in the early stages of Curmudgeon."

"Can you do anything?”

"I'm afraid not....it’s progressive. Early symptoms include railing against Bank Holiday traffic jams, then it progresses through to how Christmas was better when you were a child and how people knew the value of things. Eventually, I am afraid, you'll be shouting at Trick or Treaters and won't find Del Boy falling through the open bar flap in Only Fools and Horses anything other than profoundly irritating."

"Depends when the run up to Christmas starts"

If I get this off the ground there could be scope for good, honest, hard-working people to dig deep and fund the research which I would selflessly undertake in the Cayman Islands. 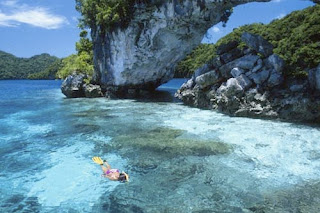 That and maybe a selection of Z-listers will get together to make a charity record of stunning awfulness. However, as it is for charity, radio and TV will be forced to feature it.

You can get that trending too 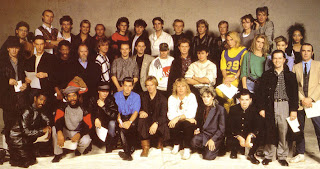 However, now that everything is turning to the usual post New Year drudgery it also meant that I could try out my Christmas present. 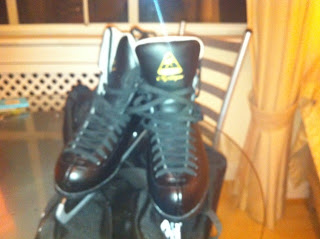 Dark Lady bought me a pair of skates.

As you are aware - if you read the blog regularly and listen to the show - I have been having secret skating lessons with instructor Shirelle at Alexandra Palace in London.

She is very long-suffering as she stopped me crashing to the ice on many occasions and still does. She also doesn't shout at me when my attempts to turn or skate backwards fail miserably. Her skills are remarkable as she has managed to get Chico sufficiently well-trained that he is now on the latest series of Strictly X Ice Come.

However, it may be beyond her to get me up to that standard.

Although having said that....I was out on the ice yesterday in my new boots having had hired ones up to that point. They are such a difference; like rocket sleds so I can fail to go backwards or turn far faster than I ever did before.

As we were skating along two teenage girls skated up and one said:

"Er, well yes (puffing himself up with pride at the recognition). I've been on Eggheads and have also done two episodes of Call My Bluff among other cameo roles!”

With that they skated off. Unaccountably my feet started to ache at that point so I went home.

#crushedcurmudgeon
Posted by Alex Lester at 12:20

Thanks Alex for making me Google a dictionary to look up 'curmudgeon'! Although i kind of guessed in the context of what you were saying. (just had to double check). As for telling a couple of teenage girls you were on 'call my bluff'- when was that last on the telly Alex? The eighties?!! Enjoy reading your blogs. Please pronounce curmudgeon on your show at 2. I haven't a clue!