After the honeymoon it was headlong toward Christmas and New Year. Dark Lady is a big fan of the festive season; I am not fussed. I am more of the Grinch in that it is expensive, crowded and raises unrealistic expectations. To me Christmas day is a day like any other. This may be due to spending more than 30 years working (Yes, I know what I do isn't really work) over this period and not having children meant that it was a day when the roads were quiet and everything seemed shut and so it was impossible to go down the pub in the evening. 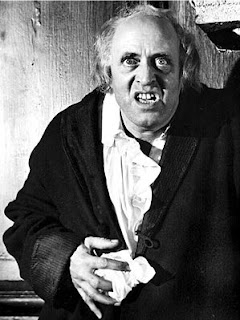 Having said that this year was going to be slightly different in that I had a ready-made family. Jamie, my Stepson (who you can see and hear in the video - click here - giving a bit of his speech) wanted dumb bells from me for the big day. So I had trudged down to a sports store and dragged 25kg of weights back home and wrapped them best I could. The only proviso is that he doesn't drop them on the floor of his bedroom as they will doubtless go straight through into the living room beneath. Bearing in mind I have already damaged the ceiling once by removing a troublesome smoke alarm and replacing it with a new one…in so doing tearing a strip of paper off the roof where the paint had stuck it to the unit. I am wary of causing further damage directly or indirectly. 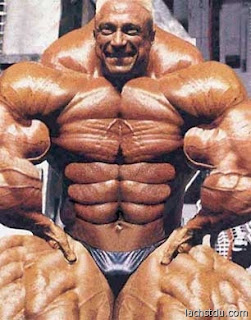 Ella, my Stepdaughter, is artistic and so I bought her an easel and some paint and brushes. The proviso here being that she didn't try and re-paint the house (even where I had damaged it!) Nor did she try and repaint her younger brother no matter how annoying she thought he was! 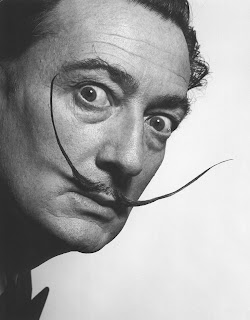 Dark Lady had skates which turned out to be a tad too small so I had to take them back to the shop.

Christmas Eve dawned and it was a family evening with a groaning table. DL likes to cook nearly as much as she likes to over-cater. 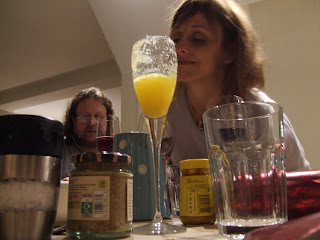 After the show it was off to the Midlands to collect my Dad who - at 85 - has decided to stop driving. Other than that it was business as usual: he provided the wine, I did the cheese and biscuits, my Sister did the cooking and my Brother-in-Law did the washing up. This is the perfect division of labour, if you ask me. 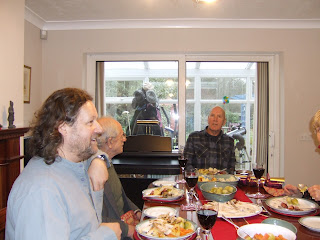 I took several pictures but unfortunately this was the best of a very bad lot. My Sister is the nose on the far right. There is a little more of her in real life, otherwise she would be touring the halls in carnival or being studied by scientists.

After filling myself up with gargantuan portions of food it was into the car and back down to the Dark Lady's house.

"Are you hungry?” she asked, as I opened the door.

After the show the following day I went back to bed as DL slaved in the kitchen and the children did whatever children do in their bedrooms. I think as adults we know the sort of things that they do as they are pretty much the same as we did when we were their age, but nowadays there is more electricity used.

The idea was that we were going to have a slap up buffet feed and my gorgeous wife was in over catering mood once again. She loves to cook and prepare food with attention to detail. She is also the world’s biggest fan of avocados, maybe even more than our own Alan Dedicoat who is also a huge fan. This proved to be her downfall.

You may remember the film Oh God starring George Burns as God and John Denver who he has decided is going to be his messenger on Earth. In a conversation, Denver’s character asks if he made any mistakes when creating the world.

"Avocados. Made the stones too big. Ostriches. No damn use to anybody".

About noon I was awoken from my slumbers by a scream from the kitchen. At first I thought it may be one of characters in one of Jamie's “shoot ‘em up” computer games. It wasn't; it was the Dark Lady. In attempting to remove the stone from an avocado she had sliced through her middle finger.

There was blood. She was holding a towel over her hand. There was then a car and a drive to A&E. I had to drop her off in order to find somewhere to park. When I arrived in Casualty she had already been assessed:

"Is it hanging off?”

We enjoyed our Boxing Day together. The two of us. Although there were quite a number of strangers about. Some moaning, others groaning and some - like the DL - being stoic…

We were there for four hours.

When she had been patched up it was back home for the rest of the day.

Her middle finger had suffered such a slice that it is now numb as the nerve has been severed, but luckily the tendon only suffered minor damage and the artery was unscathed. This was discovered during an operation the following Thursday where surgeons with very big glasses realigned and stitched the nerve sheath and generally tidied things up. No driving for a month and think this will put the skating on hold for a similar period as well.

Just so that they knew which hand to operate on they marked her forearm. I am not a surgeon but would think any medic worth his/her salt would tend to go for the hand with the bandage, that generally being a clue as to where the injury lay. 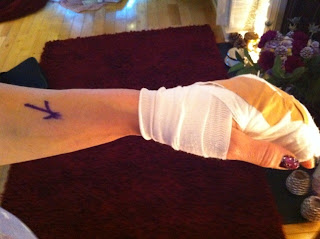 When we got home we threw the avocado away.

thanks for sharing your wedding day with us - all I can say is aaahhhhhhhhhhhh ........