There was a show on Radio 4 where the usual suspects got to do stuff they have never done before.

I say the usual suspects, for if an alien arrived on earth and decided to land here rather than in the backwoods of Nebraska at midnight (and abduct the stupidest person for a thousand miles as they usually tend to do based on those satellite TV shows: "UFOs are they real? Compelling evidence" followed by blurred footage of hub caps, frisbees and witness statements from idiots and the gullible), they would - after a cursory glance at the TV - realise that the world is ruled by one man and a coterie of sycophants. Step forward the ubiquitous Stephen Fry; a hugely talented man who has cornered the market in, er, everything! 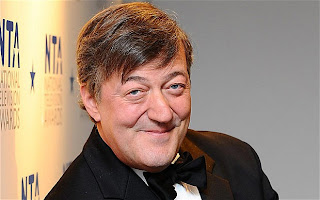 The premise of the show which, after starting on radio like so many ideas, was snatched by TV. Although he didn't present it he was a guest on one of the episodes.

I've never seen I've Never Seen... so can only guess that the "star" (from now on known as “the Fry”) gets to experience things they never have had before.

It is nice to try new things and I am a firm believer that new experiences keep us alive.

Having said that, Dr Strangelove the Producer, had Friday off as he was trying a new experience. He had been invited to the Brits. He, as you know from listening to the Shoe, is well-versed in the ways of the VIP but this was a first for him, within the narrow confines of Strangeoworld which revolves around the gym, important meetings, schmoozing celebs and the areas in nightclubs behind the coloured rope where us mere mortals are not allowed. 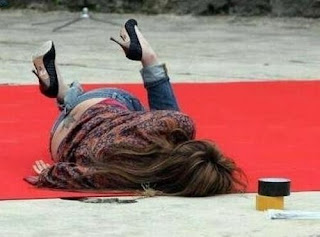 It must have been quite a weekend as judging by the look of him this morning he had been carousing solidly for 72 hours. (Possibly a new experience)

Dark Lady and I had had a peaceful and relaxed and tranquil weekend in comparison as we headed off to France. Oddly (certainly for me) we ate and drank sparingly; in fact not a drop of alcohol passed our lips (unlike Strangeo!).

We lit the fire and watched some DVDs, from the sublime Sherlock Holmes with Robert Downey Jr. (a Guy Ritchie film that I really enjoyed - a new experience!) to an Adam Sandler film that we hated, Billy Madison (a new experience also).

Sunday morning we woke up and peered through the window and to our delight a first for the Dark Lady and only my third sighting in 20 years a red squirrel was sitting in the tree outside. 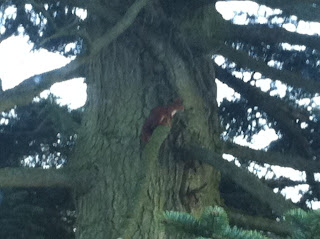 What would be a totally new experience however for everyone would be to peer through the window out into a frosty Normandy morning and see Stephen Fry sitting in the tree. Although I expect he has done that already, or the TV show, Fry's Wood, is already at the pilot stage.
Posted by Alex Lester at 13:36

This first comment on your new blog posting, Alex, is probably a slight disappointment to you, whereas I, personally, am delighted with both it's composition and content.

I reckon your blog must be the best ever - blogs usually consist of 2 or 3 lines, could fill a book with yours - or are you so full of "stuff" that you can go on and on and on...... and, oh, how posh, "just went off to France for the weekend" are you part of the british nobility and just moonlighting as a night-time jock - come on, own up Alex......:)