Another day and another half-hour on the rink with my thighs aching and my insteps protesting as Shirelle, the Instructor, is fighting hard to improve my skating technique.

I can go forwards pretty well once I am in the groove with a modicum of elegance. However, if you watch them on the TV they spend a lot of time going backwards at great speed.

I can now go backwards slowly and carefully and it makes my arches ache! 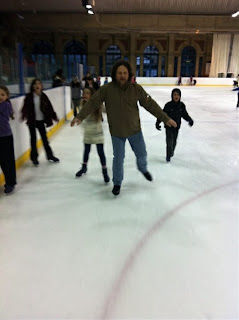 The best way to do it she has realised is to try and take my mind off it. So we talk about other stuff like when the Dark Lady is coming for her first lesson. Her damaged finger is healing nicely and she'll find out if she can go back to the gym and start skating once she sees the specialist this week.

"You better than her, do you think"?

"Erm, not really. Although I may be slightly better at the moment, but give the DL a couple of lessons and she'll be way ahead" 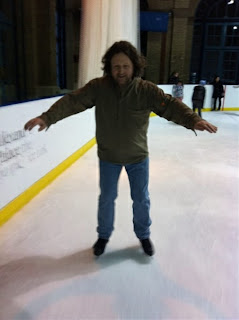 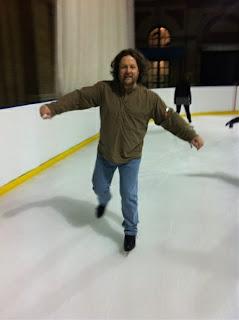 I am skating backwards quite freely now having impure thoughts about the Dark Lady in a little skating dress whizzing backwards. (Come on guys this is the only reason we watch it. Just as we watch beach volleyball and gymnastics. Just as women watch the men's diving and the athletics.)

We are simple base creatures at heart. 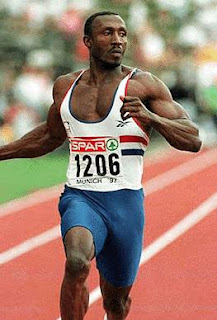 Normally when I go skating it is during the day and during the week which ensures the rink is nearly empty.

Today, however, it is rather busier.

"Knock-on effect from Dancing on Ice. Always happens although this year it is not as pronounced," says Shirelle.

TeeVee has a lot to answer for: Wimbledon means it’s impossible to get a municipal court for weeks after.

The "Delia Effect" means the shops sell out of cranberries when they are featured in one of her recipes.

Perhaps that is why we have so many battles going on around the world at the moment due to televisions’ preoccupation with warfare:

WW1 in Colour and HD

WW2 unseen footage in colour and in HD 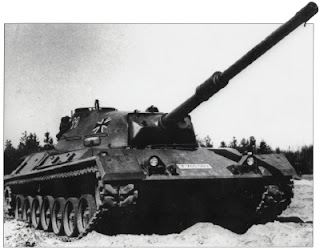 The list is endless. For my sins I think I have spent longer watching documentaries about WW2 then the actual conflict lasted. Luckily the only casualty was my settee which has a capacious bum print from years of sitting, snacking and gawping.

Meanwhile back on the rink… 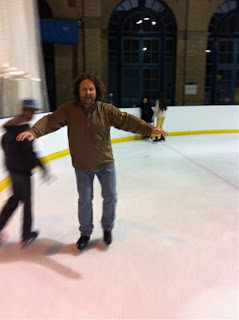 Progress is being made but at a slow middle-aged man’s rate. Don't expect me to be doing toe loops anytime soon. I have yet to master the sudden change of direction which - if I can - will mean that I can skate forwards suddenly turn and skate backwards.

The annual farce that is my car insurance comes due shortly and so it was the reminder from the insurance company. Last year, you may remember, I bit the bullet, owned up and phoned the company that specialises in "older people".

As usual I had a couple of flyers from other companies begging for my business and promising a better deal than "AcmeKar".

I phoned a couple and only to be told that it was not on due to my occupational loading; being on the Radio has many advantages but also the odd disadvantage namely that insurance companies assume you are a drunken, coke-fuelled cretin about to drive your Bugatti Veyron packed to the gills with superstars the wrong way down the motorway during the rush hour.

I am more of a Reginald Molehusband sort of a guy.

Incidentally if you get that reference its probably time you phoned "AcmeKar" yourself as you are doubtless over 50!

Final stop was a well-known motoring organisation that have their own brokerage arm.

They ran my details through their computer and announced:

"Well, I'm afraid the only people who'll insure you are "Acmekar"". (The people who insure me at present).

The nice, slightly overly-familiar chap on the end of the phone then quoted me a figure which didn't make me happy.

It was identical insurance from my own insurer and somehow was £300 more expensive than my direct quote.

Something I pointed out to him politely:

"You do realise this makes a mockery of the whole insurance process, don't you"? 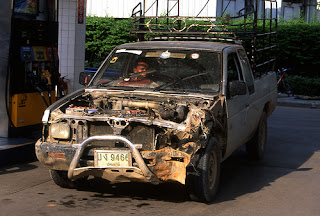 I can remember the PSA with Reginald Molehusband, he was parking, I think, an Austin 1100 but I’m not nearly 50 – a few years to go yet: although I did receive an invitation to an open day at a retirement village only yesterday. A retirement village?! What do they do there? Who works in the shops and Post Office if everyone is retired?

I’ve spent the entire day trying not to imagine you skating backwards in a short skirt.

I can't remember Reginald Molehusband, which means I'm either too young or so old that the memory's away with the fairies. (Or it could just be that we didn't have a television - those were the days.)

Well done on the progress with the ice skating, you're coming along in leaps and bounds, or should that be double salchows and lutzes.

I had better not have impure thoughts about anyone skating backwards in short skirts, otherwise it may not only be my memory that gets carried away.

Alex, please NO skating forwards or backwards in a short skirt .... the thought is unbearable.
You've just put me off my breakfast!

I've discovered a breed of people far worse than car salesmen .... estate agents .... and insurance brokers.
Guessed yet?
Job agencies. You are so lucky you have never experienced one! Creeps!