It was the Dark Lady's birthday and I had bought her a large and capacious bag. Large enough to swallow small planets whole in fact. However, I had one more trick up my sleeve - a weekend away. She had no idea where we were going, and constantly tried to trick me into revealing the destination with those feminine wiles.

"What shall I wear?"

"Will I need a thick coat?"

"What about a swimming costume?"

The answer to all those questions was naturally...

Yes. The reason being we were off to Iceland to spend a long weekend in Reykjavik. 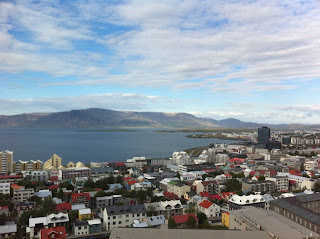 When I first went there in 1984 it was a far less sophisticated place than it is now. However one thing certainly hasn't changed - the elements. There is a saying, apparently - "if you don't like the weather, wait a minute." Sure enough, rain gives way to sunshine gives way to a howling gale then snow and to top it off sleet and back to sun again.

We had cloud, sun, some rain strong winds and murk in the three days we were there, so the land of ice and fire still doesn't disappoint.

Our hotel was slap bang in the middle of the city. After checking in and sloshing down some very weak Viking beer (alcoholic Beer was illegal until 1989), we set out for something to eat. A stone's throw and we were into a fine all-you-could-eat sea food buffet. 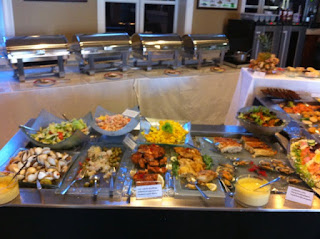 It boasted pretty much all the things I remembered, although this time they seemed to have omitted the marinaded shark and whale blubber in whey. In '84 this tasted like tyre inner tubes in yogurt and was so disgusting it hopefully helped in the suspension of whaling. Sadly though, the meat is now back on the menu.

Ironic really as whale-watching is a big tourist attraction, and if they carry on like this there won't be any left to watch. 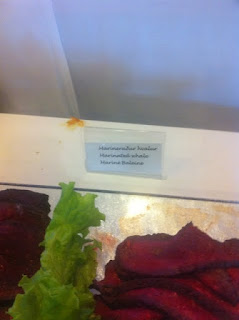 We sat and ate and ate, and had a glass of wine and lots of water. Iceland is eyewateringly expensive, particularly on the booze front so we got our money's worth and still outside the sun was shining. In fact we were beginning to flag and still the sun was shining. A saunter round the town and the kids on skateboards made all those youthful noises. The bars began to hot up. The sun shone. We began to flag a bit more.

People started to throng into town and the atmosphere began to electrify. The sun shone brightly in the sky. Reykjavik is a party town, and the weekends are when the populace likes to play. Some load up their four-wheel drives with buckets of booze and tents, head out camping and then drive slowly back red-eyed and hungover on Sunday afternoon. Others just hit the clubs and bars and stay out all night... in the sunshine.

Yes, so close to the Arctic Circle and the sun scarcely sets during the summer. I took this photo from our hotel room window at midnight. 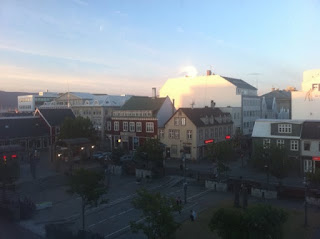 In the winter it's a different story as it only manages a murky twilight by noon, and the rest of the time it's total darkness which doubtless fuels the desire to blot it all out with strong drink. Namely Brennivin, a schnapps made from potato mash and caraway seeds. I have an unopened bottle of 1989 vintage in a cupboard at home which will probably remain that way. 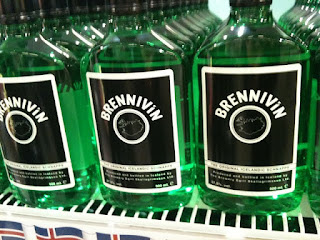 So what to do with the rest of our time? Well luckily, the blackout curtains solved the constant sunshine problem and the windows being shut deadened the clack of skateboard on concrete and thud of drunken body on floor. We slept until sunrise...

fantastic post and Thanks for sharing this info. It's very helpful.
B&B in Jaipur