The plan on Saturday was to have a leisurely and light breakfast, as I am trying to get er "beach fit" for our trip to Florida in August. Some hope I know! 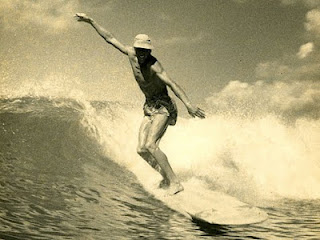 The plan was to stroll one end of the seafront and back - a distance of around five miles - and pick up a crab on the way. The sun was shining but it was a walk into the teeth of a strong wind, so we stopped to admire the view and have a short rest on one of the many convenient benches placed at intervals on the prom. 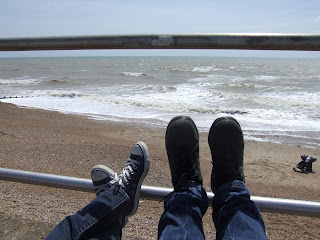 When I first moved to the town in 1988, I used to laugh at estate agents details which spoke of a flat being "within level walk of the shops". Nearly a quarter of a century later, I am luckily not there yet but I can see it is a selling point.

Crab bought and left for later collection, we carried on walking. 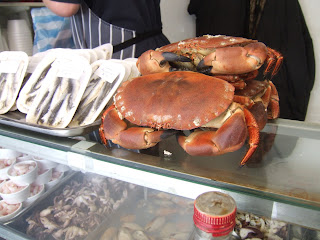 We did a turn of the Old Town. When I was a child it was a veritable Aladdin's cave of junk shops selling proper junk. When I moved to that end of town it still had a lot of interesting shops selling all sorts of junk and near junk. You could always pick up a bargain for a few quid. It also still had some fabulous pubs and shops that sold useful stuff.

There was a greengrocer/butcher run by a spectacularly opinionated man. I reckon he'd pick an argument with his own shadow given the chance. Sadly he died and the shop went. There was Butler's Famed Emporium which sold everything hardware. Sash window wedges? They had 'em. Nails by the ounce? They had 'em. Hinges for the Hindenburg? I reckon they had 'em too.

Now, many of these shops sell stuff that was once classed as junk or hardware as "fashion" items.

A wooden wheelbarrow like my grandfather had would be pounced on by the chattering classes, bought at an extortionate cost and placed in a living room to be filled with magazines.

We wandered into a clothes shop where the Dark Lady had espied a handbag a few weeks earlier. Sadly it had gone but a fetching summer coat was purchased instead - once the credit card was out!

We collected the crab and strolled home.

We were out for about four hours and it was my job to dress the crab. It had unfortunately shed its shell to aid growing room so wasn't stuffed with meat, but it was still good and made me feel very "hunter-gatherer". 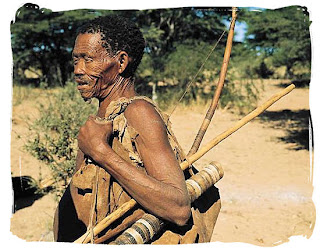 Crab, crusty bread and salad, and we settled down to watch "Sweet and Lowdown", a film about a fictional jazz guitarist played by Sean Penn. When it was finished DL turned to me and asked, as she knows her music, "how come I've never heard of him before?"

When the mirth ended it was filed away for use as a thread on the show, which we are enjoying this week. 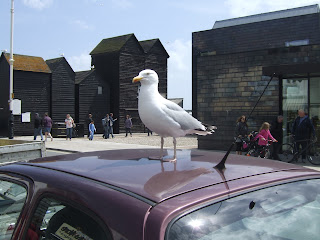 You're style of writing is wittily daft, after reading your blog I laughed and laughed. Please keep up the great work. Jim Wilson (Jimmy Couplet). :D

Hi Alex did you spot my deliberate typo? I typed 'You're' instead of 'Your' in my comment. (I'm just joking, I'm hopeless at writing.) Lol. Best wishes. :D