"AND SOMEONE SNEAKIN' ROUND THE CORNER..."

Another day and another phone call from the hardware shop.
"Your knives are ready"
Dark Lady loves cooking and so over the years has amassed a formidable array of weaponry. Yet years of constant use mean they have become somewhat blunt. Like many things in life. Eyesight. Gum recession. Walking pace. This has been a gradual process until you realise that cutting a tomato means sawing away to little or no effect or squashing it on the work surface.
Something had to be done. So last week I took 9 of the not-so-lethal weapons to a local hardware shop to have them sharpened. Due to an intervention by the DL I didn't take them all to be fixed at the same time. Blunt they may have been but a blunt knife is better at cutting than no knife.
So the final four were ready and I slunk back to the shop to collect them.
"You a Chef?" asked the guy behind the counter.
Suppose it must have looked a little odd. Same bloke comes in with a load of knives. Goes away and comes back the next day with a load more to be serviced. 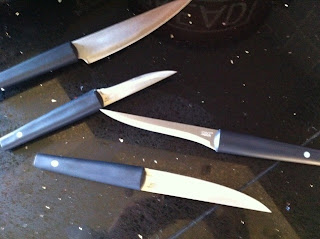 To begin with I was a little concerned to be wandering around a populous area laden with lethal weaponry. However, in the end you just forget about it and get on with it.

This was the undoing of a rather ditsy friend of mine who had linked up with a few mates in the pub one night before heading off to Germany to following morning early.

Well the evening wore on and much drink was consumed and she accepted a little gift from her friends and weaved her weary way home.

The following morning the alarm shook her noisily awake and, realising that she would be late if she didn't hurry and had - in her inebriated state - forgotten to pack for her weekend away, grabbed the bag she had been given by her friends the night before and flung a few things in, being careful to not include her ticket and passport. After all there are fewer dumber things to do that turn up for a flight without the right paperwork.

With minutes to spare she rushed to the check-in.

"Is this bag yours?"

"Did you pack it yourself"?

…barked the official who had now been joined by the Police. 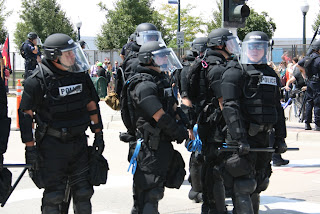 She was hustled into a side room and every item was removed from her bag as questions were hurled at my hung-over, bewildered and increasingly frightened friend.

Eventually her belongings were handed back to her with a lecture on how, in this day and age, chances could not be taken with anyone and she should have thought of that before she played such a terrible trick on the hard working front line staff.

As she tottered out to catch her plane (although by now that had gone so she had to get a seat on the next one) she wondered what on earth she had done to elicit this terrible response.

As she sat down and prepared to put her bag in the overhead locker, she got the first sober chance to look at it since she had received it in the pub the evening before....

It was a novelty case. Written on the side in large black letters was one word:

Well that rules out one Wedding Gift. You don't need knives! Oh well, back to Argos.

Oh! I've remembered who your picture yesterday reminded me of.

A combination of two people, one of them my neighbour. Bottom half, Eric Clapton ( he's not my neighbour - he lives near by though) and top half, Jeff, a retired Naval Admiral. (He doesn't have long hair like yours). That doesn't help much, since you don't know him.

So the Dark Lady decides to get her knives sharpened shortly before your wedding.
Should you be worried?

Fantastic, airport story! As for knives- have i been transported back in time? Firstly have never in my life heard of anyone taking their knives anywhere to be sharpened, secondly don't you have a sharpener at home? Finally, where the hell do you live that you still have a hardware store! We don't even have Robert Dyas anymore!

There is a law - it's probably got some clever name but it escapes me for the moment - that states that the more expensive or higher quality an item is. the more temperamental its behaviour and the more maintenance is required to keep it working. Another law states that it's not necessarily the best tool for the job.

I am using the same cheap(ish) set of kitchen knives I bought 30 years ago, originally as a wedding present for a friend who had second thoughts quite close to the big day, so I kept them. They still carve roasts, slice tomatoes and pare the skin off melons to perfection. And no sharpening has been necessary.

Someone bought us an expensive set of knives, complete with a wooden block, for Christmas a couple of years ago. First time I used one I nearly sliced off a finger. Second time it made a horrible mess of a fresh loaf of bread. So they have joined the yogurt maker and fondue set, gathering dust in a farflung corner.

A hardware store. Gosh, that was a distant memory even when the Two Ronnies discussed fork handles in 1976.