Day two of our retreat to the spa complete with guilt plates and excruciating deep tissue massage.

I dragged my battered body to the rather impressive indoor pool and paddled rather ineptly around as the Dark Lady swam strongly from end to end. 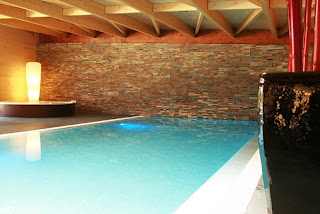 She is a crawl stylist whilst I favour breast stroke, which means she can do two lengths to my one. We sat and bubbled in the jaccuzzi for a while until it was time to dry off for dinner.

As you are often wet, the towelling robes and the flip flops are essential and tolerated at breakfast and lunch. Evenings is obviously a different matter, so it was lucky we dressed in our everyday clothes otherwise we would have been the only ones dining "a la towel".

As I said yesterday apart from the guilt plates the food was healthy but fairly normal with added nutritional information. To our surprise you could order wine so we split a bottle between us. Nectar!

I think that is as far as you can go. I wondered what would have happened if we had asked for a second bottle?

Would we have been wrestled to the ground and tasered by the diet police?

I didn't see any brandy nor cigars on offer, so I think a line is drawn at approximately 11.5% ABV. 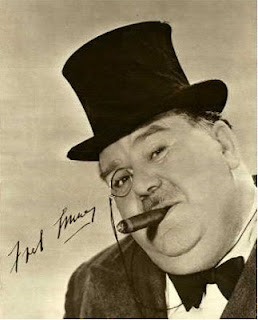 We retired to the room, watched a DVD and fell into a rather achey sleep.

We could have had eggs and stuff for breakfast but as we were running out of time and wanted lunch as well, we just had toast. There is something very British about people in towelling robes queuing politely to place bread in the toaster. Then as it was a conveyor type, replacing it when it re-appeared slightly warm but still untoasted. No-one dared fiddle with the controls. Not the done thing, dontchaknow! 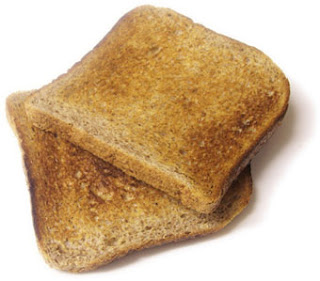 We had a final treatment each at 1PM so back to the pool we went, the idea being DL would power down twenty lengths and I would flounder around for perhaps half that. Then back to the room, pack up ready to leave, lunch then final treatment.

We loved the bathroom. Two basins. Double sized shower and a double ended bath. No arguments about who had the tap end. The only friction would be who occupied the end with the view of the built-in tv. I won and watched The Simpsons.

Then as we were getting ourselves organised I glanced at the itinerary for our 1PM treatments. I did a double take.

It was already half past. DL immediately took charge and phoned reception. Everything seemed booked. Looks like we were sunk. Or erm not immersed.

She has a way with people that I don't. Instead of stomping off in a huff, she explained we were leaving in a couple of hours and was there any way?

There was. She went off to have her feet attended to with reflexology. They check your health by feeling your feet. It's a bit like casting runes or examining sheep entrails, I think. 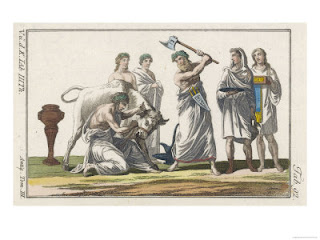 Apparently she has had a neck problem (clue - tiny scar). They also mentioned her spleen. I spoke to someone after the weekend and they asked "did they mention the spleen? They usually do".

I had decided to try a dry flotation. I was given a fetching pair of paper pants (DL made me throw them away after - not sexy apparently), was basted with aromatic oils like the day before, wrapped in towels, placed on a bed, wrapped in a rubber sheet then at the touch of a button was lowered into a bath of warm water.

As it was a dry immersion, there was a rubber barrier between me and the water. So no danger of my pants disintegrating.

Then the lights were lowered and I was left to my own devices with a soundtrack of bird and I think whale song.

"Just relax. Drop off to sleep. Every twenty five minutes is the equivalent of two hours restful sleep" said the nice lady. At least I think that was the equation.

So I was alone with my thoughts and the "music". Time for some restful sleep?

"My nose is itching and I can't really move"

"It's a bit hot in this rubber sheet"

"Wonder how long I've got left. I may need the loo at some point"

"There are people talking in the corridor"

"This is ludicrous. You are a grown man in paper pants wrapped in a rubber incontinence sheeezzzzzzzzzzzzz"

I think I must have dozed off just before the end of the session. I'm not claustrophobic but was quite glad to be out of there.

Dark Lady was concerned that I hadn't enjoyed myself. I had. Every bizarre second of it.

Can't wait for another go. Not sure I'll go for flotation or deep tissue massage next time. There are dozens of other treatments to try though.

Hmmm, maybe a reflexology session. Feel my spleen may be playing up. 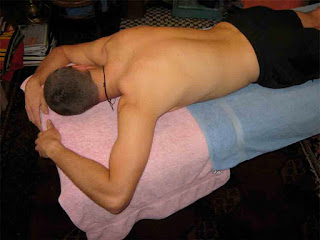