The barbecue season is upon us. Or should that be barbeque? Or maybe you prefer BBQ.

I'm not sure if we have been lagging behind other countries but I don't remember much barbecuing going on when I was a kid. Maybe it was due to our generally terrible climate and our terror of the big outdoors. Or in my Dad's case:

"What's the point of cooking on a bonfire when we've a perfectly good kitchen indoors going to waste!"

He's a big outdoors fan but just not cooking. Maybe provoked by some childhood Boy Scout trauma or National Service with all the attendant yomping and tents. 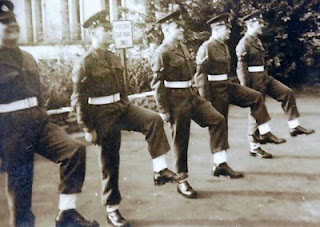 Other parts of the world with better climates do the barbie better than us. Notice I used the diminution "barbie" just then. Never been to Australia but it is part of their national stereotype. That, plus convicts, kangaroos, Bruce, Sheila, billabongs, Ned Kelly and not being very nice to Aborigines. 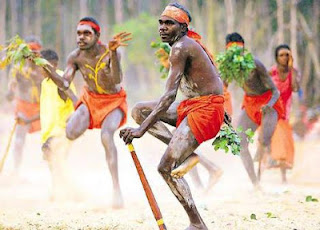 On my road trips across America I have seen Pacific Coast beaches with permanent barbecues in the parking lot. I've seen RV parks and bars advertising "barbecue pits for rent".

That is a brilliant example of free enterprise. Dig a hole and then rent it out. Bit like cemeteries I suppose with different flesh.

Once outside a redneck bar in Minnesota I witnessed a few guys barbecuing off the tailgate of their pick-up truck. If the truck had caught fire it would have incinerated their mean looking dog, and their rifles casually slung outside across their gun rack.

Last week in France when the rain eventually stopped, we decided to get the BBQ out only to find blue tits nesting in it. So we left them be - much to their relief no doubt. It has been known for the French to eat small birds dipped in armagnac. I wonder if they take the feathers off first?

So it was only when we got back home that the Dark Lady decided to fire up the grill. 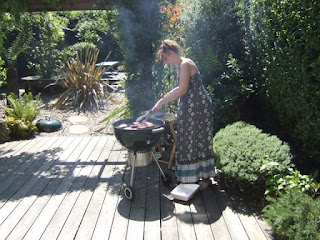 This is often thought of as "men's work". Hunter-gatherer slays wild beast, brings it back to the family cave, etc. Now, being lazy and cooking being one of the growing number of skills I realise in middle age I don't possess, this work is best left to the experts.

In no time the DL had fired up the charcoal. It was glowing to perfection. None of your gas powered cheating machines here. On went burgers, sausages, chicken and steak.

You can get a flavour of it on my Facebook page where there is a short video.

I read about a twenty-four hour race similar to Le Mans, where crowds turn out with their whole camping outfits to watch the race. Apparently the drivers can smell the cooking as they roar around at 200 MPH.

"The Ferrari driven by Jenson Button has just pulled into the pits for a tyre change and a burger and to have the drool wiped off his helmet. I gather the team is running on all weather coleslaw this season."

I, being the dutiful husband, helped out by laying the table and eating lots.

It was the least I could do to help.

I was not alone in enjoying the pleasures of the flesh. Wednesday morning we compared knees as it is now officially shorts weather. Producer Strangelove mentioned he too had been at a barbie the night before. His tally: four sausages and a small piece of chicken.

I think his legs are really shaping up now. Snorkers could be the answer.
Posted by Alex Lester at 09:38