Off to the airfield yesterday in order to catch up on the flying (or "lie in", according to Strangelove); either my diction is now so poor or his hearing is duff due to all the VIP-only gigs he goes to.

Since I got my licence in 2010 I have not had a massive amount of time to fly. Unless you fly solo 12 hours in a 2-year period you have to take your test again. I need 7 more solo hours before September. 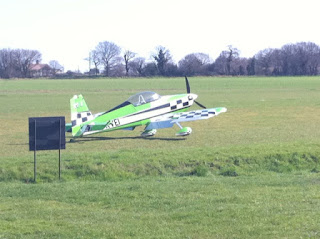 I have been converting to another aircraft which is based closer to London rather than travelling up to Halfpenny Green in the Midlands to hire the C42 from Hadair and its chief, the excellent Steve Wilkes.

Since last summer, long-suffering Keith in Upminster has had to put up with my glaring errors and general incompetence as I try and get to grips with his Jabiru UL450D.

The weather and holidays have been rather against us of late but was good enough Tuesday for us to go up for an hour. We went round the block a few times until Keith pronounced himself satisfied and just needed to show me how to operate the radio.

"feel between your legs. Next to the throttle you'll find a button. That's the transmit button."

"Other side of the throttle"

Once more round the block and out he hopped.

"Your go. Just do a circuit and watch for the wind eddying over the trees"

Ten minutes later I was back on the ground.

Yaaay. Now only need 6 hours and 50 minutes solo before September. 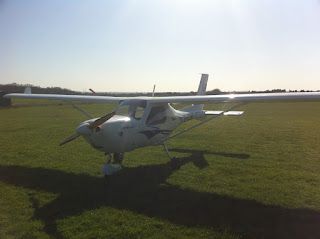 In the evening Dark Lady and I went to a showcase at the BBC to see a singer called Katrina from LA. No, not that one. She had a nice voice and stage presence although DL thought there was a bit of Bonnie Langford stage school influence in there which I agreed with. She was well received and afterwards we said hello just as a young bloke arrived with his camera. So being the seasoned pro that I am I grabbed her and posed for the pic cheek to cheek.

"I think he wants you to take a picture of me and him. NOT you and me!"

So laughing it off, I duly obliged and slunk away to catch up with the DL, who - oblivious to this huge blow to my gigantic ego - was already outside. 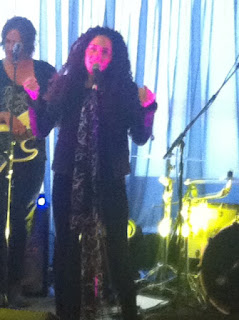 MOT week continues with a trip to the optician. Teeth Monday, now the annual eye test. I've been using pound shop readers since I lost my last proper pair a couple of years back. I thought I would wait as I didn't want to buy a new pair and then need another new pair if the prescription changed.

I had my eyes puffed at with compressed air for Glaucoma test and they took flash photos of the back of eyes leaving everything with a gentle purple rinse for a few minutes after.

In the dark the optician shone stuff, peered at me lenses, whirred back and forth and eventually the verdict:

1.75 up to 2.00. First change in 8 years so apparently not bad for a bloke my age. I Informed the Dark Lady of this fact who simply replied:

"Now let's get you some proper specs".

As you and I know: This means she wants to choose the frames! 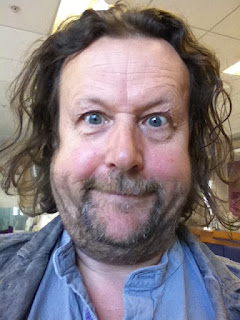 Darkest of Dark Lords - ignore the upstart strumpet of a singer and her seedy pap. To judge from your (admittedly somewhat dubious) mugshot, I'd still rather be snapped with you than with her. It has probably been a long cherished ambition of hers to meet the original Chewbacca...

Sorry; that's a joke. You're proper lovely - after all, the Dark Lady is exquisitely elegant and comely - she would never have settled for anything less than rugged handsomeness, OK?!

I comment on this only because I am terrified of flying. I spurn Dr. Strangelove for his disrespect of your bravery - ask HIM to handle a light aircraft's throttle and I daresay he'd soil his thousand-wash-grey Y-fronts and run, weeping, to the solace of your manly embrace.

I can't afford the dentist, but I do see my optician every now and then (standing order for contact lenses, you see. Ah, vanity!). And the contraptions they place afore your sweet peepers are the foulest of their kind - whatever frames you end up with - they WON'T be as bad as those, now will they?!?

And fret not over the Dark Lady's choice of frames. After all, she chose YOU as her partner, soul-mate and help-meet for the rest of her days, didn't she...? Therefore you may be assured that she has good taste, and you need not fear the onslaught of humiliating eyewear... Probably.

Scary stuff especially when hearing about your driving skills ... or lack off! ... plus lack of mechanical ability!