WOKE UP THIS MORNING!

The chores continued through the first part of the weekend which was a shame. There are various domestic bits and pieces that need doing, so unfortunately had to cancel a trip to Sheffield in order to commune with nerds. Yes another Nerd Night had come. This you will remember is where DJs, journalists, authors and affiliated occupations get together to try and out-bore each other with tales of when the industry was better. 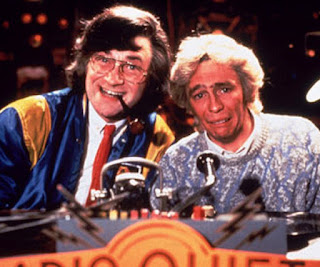 Whilst they were eating and drinking, I was packing stuff into boxes and only later in the evening did I take my weary and thirsty body to the pub to ease my troubled mind.

The moment I sat down I was inundated by drunken abuse from my friends in the north. I once had a mobile phone which I am sure asked you before it sent the text. That way it was possible to censor yourself before you made a complete fool of yourself. It was also useful to inhibit drunken rages about presumed slights, and most importantly to nip the worst problem with drunken texting - the clumsy flirtations and the pleading with ex-partners for another chance. (NB important to note: they dumped you once, what makes you think they are more likely to take you back if you are drunk?)

Saturday and it was back to the bosom of the family. There was a roaring fire to be sat beside. There was a monster chili to eat. There was wine to be drunk. There were yet more DVDs to be watched. 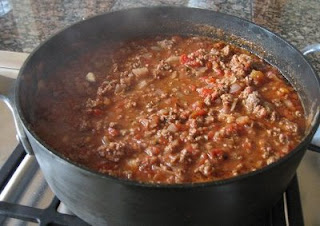 We wept our way through "Mr Holland’s Opus". The tale of a composer who due to family and financial reasons had to forgo his life long ambition and become a music teacher in a small American town. Right at the end after thirty years of teaching, the school perform his masterwork. It struck me that after all that time the resulting tune wasn't very good and quite short. He had obviously made the right decision to become a teacher.
We laughed in places at "The Cowboy Way" and "The Commitments". We also proclaimed ourselves baffled at "Even Cowgirls Get The Blues". With a soundtrack by k.d. lang and starring Uma Thurman, it promised much and delivered nothing. River Phoenix’s sister Rain was in it. I note she has a sister called Summer, as well as a surviving brother Joaquin and another sister Liberty. Over the years we have talked about names a lot on the show. Obviously her parents, realising the pitfalls of naming all their offspring after weather patterns and seasons, chose some slightly more conventional names for their other children. I can only imagine the consequences for the child's self esteem should they be called Drizzle or Smog.
Sunday came and off we went to the ice rink for our first joint lesson. As I have rather more daytime than the Dark Lady, I can swan up to Alexandra Palace in London where there is a cracking rink and avail myself of the expert teaching of Shirelle. This time we booked for half an hour each. DL went first as I skated around "warming up" and trying out my er… "moves"! This in effect meant trying and failing to turn backwards on a sixpence and also to skate in reverse. 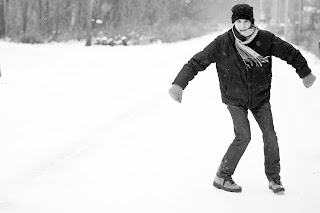 By the time I have any momentum, my insteps and arches are beginning to ache for some reason so I have to stop. I am either not doing it right, my boots are still too tight or more likely old age has made me less than supple.

DL of course proved to be a natural. Whirling around the ice like she was born there. When it was my turn we did a few turns and Shirelle remarked that my look of concentration resembled the expression of discomfort and shame of someone who had just soiled themselves.
However, I was taught a different way of skating in reverse. This apparently is known as "Big Boy Backwards"! Not sure why but the way my mind works it sounded like the name of a long dead bluesman. 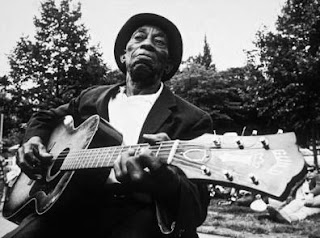 "I was born down in Alabama in a one room country shack. I was one of fifteen children. My daddy was a sharecropper and we all helped out on the farm. I saved up enough nickels from collecting old empty Coke and beer bottles to send off for a Sears Roebuck Guitar. I didn't have no formal teaching. I just learned from listening to the old Victrola and picking out tunes by ear. Wasn't until I started playing juke joints and meeting other musicians that they told me I was playing my guitar upside down. I was playing it strung right handed with my left hand. Too late by then as I knew all the chords the wrong way up. That's how I came to be known as "Big Boy Backwards"!
We both had a fantastic time and can't wait to go again. Even though it is quite hard work and I doubt we will ever reach Dancing On Ice standard, it’s just a fun thing to do and quite good exercise.
Spare a thought for Dr Strangelove who due to too much exercise has another cold. He barely shakes one off before he starts another. It’s a rather red faced version of chain smoking I think. Producer Sunflower (so called because he is tall and cheerful) will be in the production chair Tuesday whilst Strangeo shivers and sweats at home. Wondering when he'll be well enough to go back to the gym and over train thus starting the whole cycle off once again. He won't be told that boy!
Posted by Alex Lester at 12:29

You were missed in Sheffield,oh dark Lord...but there's always the next one to eat,drink and be merry.However,you were with us in spirit and that's what matters...

But Chilli Con Carne,the family around you, and "The Commitments" sounds a fine substitute!