It was time for another of our nerdy-night anorak DJ meetings on Friday last. I was ‘curator’ which is a posh way of being the bloke that books the restaurant. My reason for using this term, as I’ve mentioned on the show, was that Morrissey was described thus when he suggested the turns for the Meltdown Festival in London not so very long ago. This seemed a simple enough thing to do. Go into a modest street corner eaterie and say to the manager: "Can I book a table for between 20 and 30 people for Friday 15th August please?" I then emailed and phoned a load of blokes and women who work in radio and tv and sat back and waited for the day.

A few people replied saying they couldn't make it. However - and this I think is why I’ve never really done ‘parties’, is where the stress starts to build up. Closer to the day a trickle of people started to say they couldn't make it after all. Then by the day it was becoming a deluge. I had visions of sitting in a deserted restaurant having to choff my way through spaghetti for 30 as I had paid in advance. 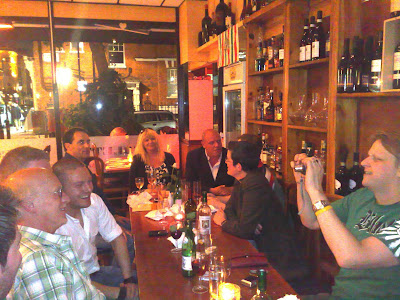 Luckily however there were still enough to make a good turn out and some who weren't able to stay for the meal came and had a few drinks before the chow. We had DJ's from Hull, DJ's from Barnsley, DJ's from Blackpool, DJ's from Birmingham and even DJ's from London. There were women in the shape of DJ's girlfriends and women DJ's, there were self employed DJ's who ran their own companies that provided DJ's for the radio industry. There was even a TV announcer. We’d asked him along so he could do the closedown announcement.

"Well thank you for turning up and eating and drinking too much this evening. From all of us here a very good night....goodnight! However he’d forgotten to bring his recording of the national anthem to be played over slides of daffodils in the park.

We talked about… erm, DJ stuff and ate and drank and everyone was busy shouting to make themselves heard. In the morning I was hoarse as I expect everyone else was through trying to get to the punchline of your particular anecdote before another DJ butted in trying to top it with one of their own.

If this doesn't sound like much fun......it is. However you have to keep your wits about you to nip in quick with your tale. I think for the next one where we’re going to hit Manchester; it would be a good idea to run it like a panel game. We’d have fingers on the buzzers so we would have to wait our turn to speak. Failing that we could do it like a Presidential press conference and someone (The curator?), could point to the person so they could do their bit before the baying mob drowned out the last and most important part of the story.

Fell into bed at about "fifteen big minutes past the hour of 1 o'clock" - (this is the trouble with one of these events!) Luckily it was fairly well behaved without any of the blokes trying to "pull the trigger" on any of the lady broadcasters err "45's"

Saturday and my mate "Libidoboy" turned up. I had a couple of tickets for Van Morrison at Kenwood house in London's Hampstead. Now, as most of his waking moments are spent thinking of women, this means the man doesn't always listen to the directions. It was a warm afternoon so we decided to walk there which was only about three miles from my flat. I had said "It’s an outdoor picnic type event and we’ve been allocated seats in the deckchair area right up the front." When we got there he turned to me and said: "where is the auditorium?" then said, “If I’d known it was outside I would have brought my jacket!"

"What part of “it’s an outside picnic concert and we have deckchairs” gave you the idea it was going to be an ‘indoor gig?’ "I thought you were joking" he said. I left him searching for women whilst I went and got a couple of plastic cups of free cider. There was a special sponsorship thing going on with an upmarket cider manufacturer. We had a couple of free glasses of the stuff - one red and the other more normal. I’m not really a cider fan but the important word 'FREE' makes all the difference to a cheapskate like me. I had to pour it away as it was so sweet. My teeth are still protesting.

The weather forecast had said rain but it held off right to the very end of the concert. The only storm was a woman a few seats further up who took exception to something a bloke behind her was doing. She stood up and yelled at him so loudly that I thought I detected a tremor in Van's voice and maybe he took a pace or two back from the front of the stage. Libidoboy thought she was ‘passionate’.

Great band. He did all the songs we know and love and the whole thing was being filmed for a DVD. Security was quite heavy handed though with people being roundly ticked off for taking pictures or standing in the wrong place. Never seen him before and people had told me he could be somewhat variable and also irritable. He only spoke once as he strapped on his ukulele when he said: "George Formby's greatest hits.” This I think meant he was in a good mood. The signs said he would play until 9.30 and that is exactly what he did. He left the stage midway through a great rendition of ‘Gloria’ and then the rain started. You don't get between songs chat or thunderflashes and lasers with Van Morrison but you do get some great songs and an ace band.

It was now dark and we filed, bleating quietly like sheep, out of the park just following the others through the trees in the dark until after about 10 or 15 minutes walk we ended up somewhere or other which had a welcoming pub with huge screens showing a Police and Eric Clapton gig. Rain stopped so we carried on our way thinking we would find a Tube or a bus. At 2am after several pubs, packets of crisps, one sausage roll (shared) and several more pints, we were in Camden Town, a short bouncer throw from the flat. After being refused entry to the last venue - (They said it was because it was closing time. We think it might be because we looked too old and unfashionable), got back home at a quarter to three. Went to bed and as usual woke at 6am...doh! 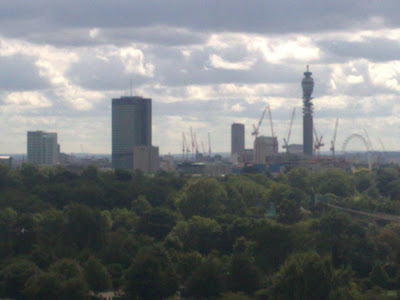 Decided to walk to Primrose Hill and then back via Chalk Farm and Camden after a healthy juice related breakfast. The view from the hill of the landmarks of the capital was pretty impressive. However one nagging uncertainty. Had the the diet been ruined by the beer and the crisps and the fry up on Saturday morning. Or had the walking served to burn off the extra calories?

I heard you discuss this on
TBToTD show........
...and I couldn't stop laughing...I would advise
" Libidoboy" to put some pepper on it!


What a great title for a sitcom...


It's true what they say "REAL LIFE" is so entertaining!

I laughed SO hard when you spoke about this on Monday!!!

On behalf of Exile Productions and Exile Publishing, many thanks for reviewing Van Morrison's Kenwood show and, for your readers’ info, up-to-the-minute news on Van’s latest album - Keep It Simple - and 2008 shows is, of course, available on www.vanmorrison.com and www.myspace.com/vanmorrison and, for a limited period, you can still see Van's exclusive BBC sessions at http://www.bbc.co.uk/musictv/vanmorrison/video/ . We’re also pleased to announce that an increasing archive of exclusive film footage of Van Morrison performances has now been made available for fans on Exile’s official YouTube channel at http://uk.youtube.com/user/OfficialExileFilms .

Thanks again for your plug and we're glad that you enjoyed the evening (and that the weather held-out !!).

Never mind all this stuff about VM concerts, what's the latest on the brolly on the door??? Has anyone been back this week???