THE TIME IS SPIRALLING OUT OF CONTROL

Less than a week before the next trip and I’m not sure that I am organised yet.

I had a busy time since the last blog. On Friday I went up to Birmingham for a night out with DJ's and radio production people including former colleagues at the Mailbox and a load of ‘Young Turks’ from the Commercial sector, who made me feel like a dinosaur with such choice phrases as "I used to listen to you when I was at school".

It was good fun though. Started off in a pub that was playing non-stop Pet Shop Boys and Erasure. An anatomically correct Teddy bear was nailed to the back of the bar just beneath the stuffed squirrels and there was a sing saying: "Very private room for hire". Wonder who their target clientele were?

By 2.00am things had deteriorated to remembering what label certain songs were on, colour of aforementioned label and the new Kid Rock single which is on the Radio 2 playlist which features bits of" Sweet Home Alabama" and the piano figure from Warren Zevon's ‘Werewolves of London’. Was it a sample or a re-recording someone asked? The ensuing argument raged for hours. Note to all right thinking people: If you ever find yourself in a bar next to loud voiced, conscientious men and women arguing about music, they are radio presenters. Finish your drink and leave quickly and quietly for your own safety, in case you get sucked into a discussion so tedious that you will attempt to gnaw your own elbows off. If you collect train numbers, football programmes or china elephants and find people think your hobby is rather sad, it isn't. Compared to the above you lead a rich and varied life. At last you have someone to sneer at! 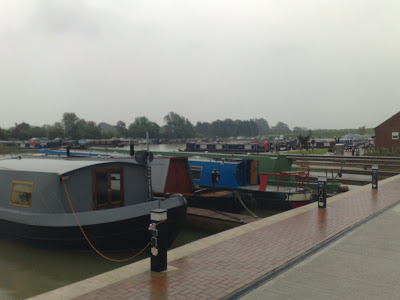 On the Saturday went to Nether Heyford in Northamptonshire where I was kindly asked to open a new canal boat marina. I was made to feel very welcome and there was a good turnout. Got to cut the ribbon whilst aboard a spectacular narrowboat. I thought I’d exorcised the canal itch but it made me realised how much I missed the "Blue pig" and all the fun I had on it.

Gave a short (always the best way) but cheerful (well I did smiling and stuff) speech and then it was hog roast and beer time. A woman tottered up to me gave me a slobbery kiss and squeezed my bum. Result!

On Monday, a friend of mine came to stay in my flat and we went off to see Eric Bibb. I’ve long 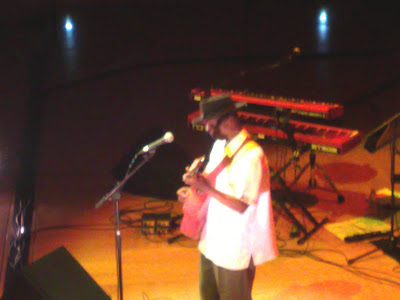 been a fan and have often played his music as part of the ‘library’ feature on the show. He was fantastic and the audience loved him. Once he’d got a good groove going, I found myself nearly wanting to dance he was that infectious. At one point he finished a number to rapturous applause and, when the clapping had died down, he said "can't let that one go" and proceeded to do another 3 or 4 choruses. If you get the chance, go see him. He also has a cracking band and the most wonderful drummer. Are we in the age of the minimalist drummer? I saw Willie Nelson the week his percussionist just had a snare. Eric's man had a snare a hi-hat and a cymbal which he played with brushes and his bare hands. Sublime!

That was a two hour sleep night but well worth it. Tuesday evening I went to a party which game me the chance to meet stars like Nicholas Parsons who was a true gentleman, John Waite from Radio 4, who I discovered listens to the show on his way into work every day and lovely Annie Nightingale from Radio 1. I was able to say to her: "I used to listen to you when I was at school.” I think she’s probably used to this by now but it just goes to show that everything is cyclical.

I’m now in the office making preparations for ‘American Adventure 2…The Return’, although you think that’s a naff title and it should be something more accurate like ‘American Adventure 2….The Fattening’. You’ve also suggested that I pack my kitchen table as luggage because I have a waking nightmare of being high over the Atlantic and realising that I’ve left my drivers licence on the table at home.

I’m going to take very little stuff with me this time as that leaves more room for CD's - although you’ve already earmarked my luggage for packets of "Twinkies", postcards, a Shelby Mustang and/or sundry American car parts.

Lots of invites from friendly ex-pats and US citizens to ‘drop by’. As I’m not really sure which direction to take, I doubt I’ll be able to take anyone up on their offer. However, thank you for your kindness anyway.
The next time I blog, it will hopefully be from California. Should be an interesting trip and I hope you will follow me via the website, the map and the daily (ish) blog. I look forward to reading your comments from my motel room somewhere in the United States
Posted by Alex Lester at 09:21