So week two of the new improved healthy lifestyle continues. Calorie counting and walking a lot seems to be doing the trick so far, but the only problem seems to be actually weighing myself.

I have the scales and have worked out that placing them on a hard surface knocks nearly half a stone off, which is a very good start as I was 14st 2lbs when standing on carpet, but I’m a sylph like 13st 7 when on a wooden floor. Last week I’d lost 3lbs and I’ve lost the same again this week, so I’m heading in the right direction as I’m now on the cusp of 13 stone!

There is little dignity in it though. I refuse to weigh myself after the weekend as I know I eat and drink more when I’m not working, so I try and hang on until Thursday morning after I’ve finished the show and had a sleep which is when I think I will be lightest.

Being a cheapskate as you know, I opted for the cheapest scales I could find. Although a good make the ‘economy’ version skimps slightly on the readout. Even with a magnifying glass over the dial it’s difficult to see. So how do you get an accurate reading? I pondered this for a while until the solution presented itself: Binoculars!

Before my recent US trip, the London Evening Standard was giving away free binoculars at the news stands near Lords Cricket ground. So passing by one day I snaffled a pair with the "They will surely come in useful one day" mindset that all hoarders have.

So picture the scene (actually on second thought don't). Me, naked in the hallway of my flat, peering at the readout of the scales, though a small pair of plastic binoculars. Is there anything less dignified do you think?

Problem was that being short they wouldn’t focus that close and exchanging them for my reading glasses didn’t help either, as then the dial was too far away. I decided against knocking on a neighbour’s door and asking them to read it for me as I don't know them that well! Eventually with supreme effort, and a slight stoop, I read the result. Encouraging - but there’s still two stone to go. I expect the weekly loss to lessen as that’s what people tell me.

The brisk walking regime is paying dividends as well. After the show I tend to walk back through the park and often walk back to the office later in the day - a round trip of nearly 4 miles. However I think the pedometer needs calibrating as my stride length can't be right since it’s being spectacularly optimistic regarding the distance travelled. On Thursday my mate Simon (Libidoboy - as he always seems off to meet another girl and finds staying with me useful as he doesn't live in London), and I walked to Camden along the canal towpath in the pouring rain, then across Regents Park down through Soho and Trafalgar square and over the bridge to the Royal Festival Hall on the south bank of the Thames. According to the machine on my hip we had trudged more than 13 miles.

Walking through the park each day first thing in the morning is very relaxing and also you see the same people. There is the elderly, very bent lady, with two dogs and two sticks. There are the joggers, there’s the man doing Tai Chi which includes slapping himself about the face, (A low rent Max Moseley?) and haughty woman. She is attractive in a tight vest and tracksuit bottoms who strides past me, eyes front, and nose in the air. 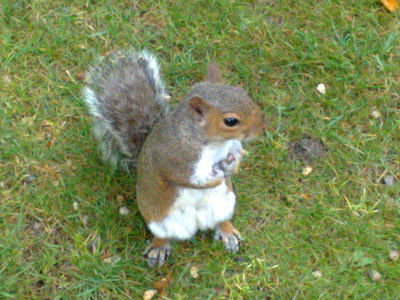 She resolutely refuses to catch my eye. Obviously I have the look of a dangerous loner!

There is also the wildlife. Well magpies and some very fat pigeons eating the berries. There are also squirrels - including the one pictured. It’s terribly tame and you can get up quite close as it goes about its squirrelly business.

Back at the flat and there is obviously something odd going on in the apartment opposite. Some days when I return there is an umbrella hanging from the door knob. Other days it is missing. Y 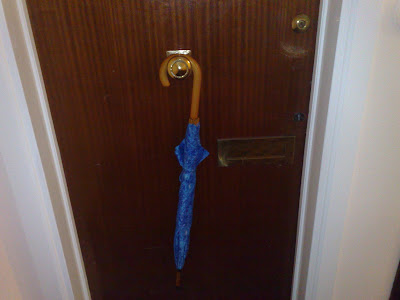 ou have suggested that it’s there simply because it has been raining and the owner didn't want to drip water in their accommodation. However one day it hadn't rained at all, so perhaps it was a sign for a clandestine affair rather like the old "OMO trick" - put the washing powder carton in the window to tell the lover, "Old Man Out". Or possibly it’s a safe house for a den of spies.

However you did point out that more probably it was "a device for baffling the idiot conspiracy theorist who lives opposite.”
Posted by Alex Lester at 09:32

RE: Walk through Regent's Park..
haughty woman. She is attractive in a tight vest and tracksuit bottoms who strides past me etc....


Erm, YOU do realise that's ME you are talking about!!!!