I decided when I got back from the US that the only way to lose weight was to go public, so you could shame me into losing it. After 4 weeks of fast food and slow metabolism, I knew that all was not well in the world of Lester's body. The "temple" was under severe strain.

The answer seemed to be to eat and drink less and go and take more exercise. This is obvious I know, but we (OK, I!) can manage to convince myself of nearly anything if it means not having to take positive action.

Perhaps if there’d been some coke and hookers revelations or "My booze Hell" that could have made me an ideal chat show guest. What better than to stagger about on late night TV with your shirt hanging out like Oliver Reed? Or to have your dungeon activities posted on YouTube? Is there such a thing as bad publicity??

So ‘My Chubber Shame’ is what I am concentrating on at the moment. Earlier this week I bought a set of scales and weighed myself. I was horrified to see that when the whirring of the machinery stopped I was a juddering 14st 2lbs. For a man who should be under 11stone this is not good news. Far worse than I first feared.

A friend of mine cheerily informed me that I now weighed more than Johnny Vegas. So the takeaway on a Friday has been axed as has most - but not all, of the beer. Perhaps you can advise if you have travelled this road. I reckon that if you go on an ascetic hard core lettuce and boiled water diet you will not stick to it.

I’m now calorie counting and I believe that if I aim to keep my intake around 1500 or fewer per day, of the right sort of stuff with low fats and lots of juice and vegetables, I may see some results without having to cheat like Fern Britton. 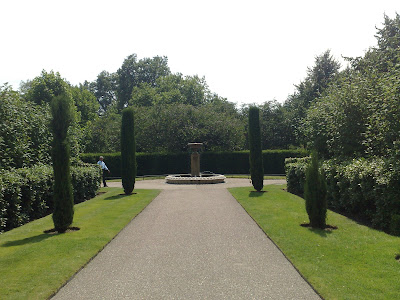 One of the advantages of being back in London is that it’s easy and a pleasure to walk everywhere. After the show I walk the mile and a half back to the flat through the park and often later in the day I walk back to work.

Went to see my dad and sister on Monday to show them the American Adventure pics. My brother in law wisely pleaded a prior engagement. I think he said he was washing his hair. My dad did start to nod off a couple of times as there are only so many pictures of the highway and trees and lakes that you can show and sustain interest. Every time I saw him beginning to drift I would have to raise my voice: "So this next picture, 243 out of the 500 I have to show you, is of the highway in WISCONSIN!!!" This would jerk him back to the present.

Whilst I was there I needed to visit the loo and decided to weigh myself on his scales. Astonishingly I was erm a ‘mere’ 13st 7lbs. Why the difference? Reading the instructions on my scales I realised that they were standing on carpet. This has some weird effect and makes them weigh heavier. So a quick adjustment and I now weigh a still horrifying 13st 6lbs.

Read next weeks thrilling instalment which I will type with these hopefully slightly less chubby fingers.

Another friend suggested I rename this blog ‘Blubberwatch’. I am out and I am proud. I am not ‘big-boned’, it’s not ‘hormones’ nor is it a ‘slow metabolism’. I eat too much!

It’s been a lot of fun on the show this week and as you know we do like to do odd things so it seemed a good idea to become a Guru and start our own cult. This, in common with others, means that we can fleece the gullible and get lots of sex. So each day we’ve been coming up with a totally nonsensical phrase which at first hearing sounds deep and profound but in reality means absolutely nothing at all. 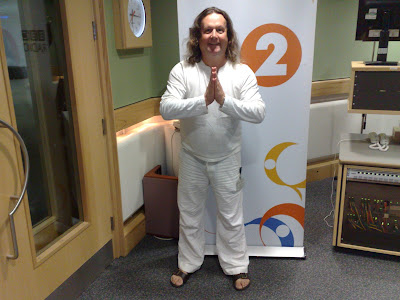 I even wore my guru outfit on Thursday morning as you can see from the pic. So far however you’ve been a bit sharper than the rest and we’ve not received a single donation nor any offers or, err, ‘bodily comfort’. We live in hope.
Posted by Alex Lester at 09:27