Over the next nine days we had the best time relaxing in the sunshine. It was so humid that every time we went outside our sunglasses would steam up.

We went down to watch the sun go down, and drank margaritas to the sound of live music. 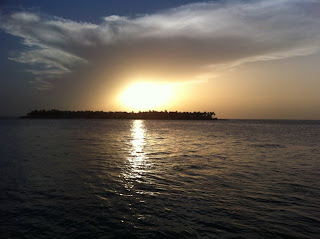 We lazed by the pool. 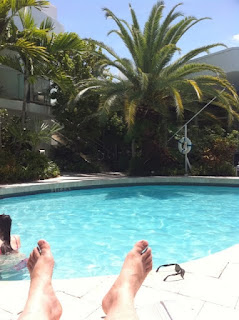 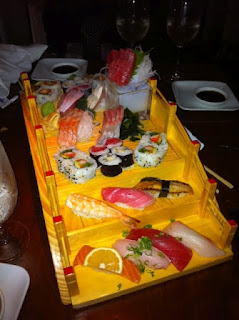 We hired bikes. Although bizarrely Ella's saddle was stolen one night. Don't think it was a pervert. It appeared to have been swapped for a rather tatty one which chafed when she rode, so we swapped it with Jamie's who was very good about it.

We rode around on a "Ghosts and Gravestones" tour, Which had the usual guides/actors trying to whip up enthusiasm from a busload too hot to care. It seems yellow fever carried off huge quantities of inhabitants in the early days.

After a few days Jamie and I pedalled off to Front St and South Point Diving. With the aid of Henry (who did the book learning) and Will (who did the teaching in the pool and in the sea), we both now have our PADI open water diving certificates. We spent hours out on a boat diving thirty feet onto reefs for forty-five minutes at a time. 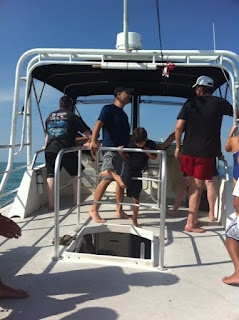 We saw... err fish. Lots of them. We saw jellyfish. Lots of them. On one dive I was just checking on Jamie, my "dive buddy". I noticed his eyes seemed big and round. He was pointing at something. I turned to see a four foot nurse shark swimming lazily past. 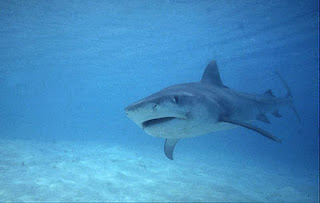 That was a bit of a rush.

When we weren't swimming in the pool or the sea (which was 88°F some days), we cycled into the main part of town with its array of designer shops and stores selling terrible T-shirts.

Jamie bought one. Not too awful. However, the design fell off in part when it was washed. Dark Lady to the rescue.

I'd have just put it down to experience and it being a cheap appliqued T. Not her. Back to the shop and one short, polite but firm good humoured conversation later and my stepson had a replacement.

Whilst we were there I bought a shirt which was "Best Time of the Day" appropriate. I shall reveal it in the final holiday blog. Also, whilst DL and J were in the shop Ella (16) and I (56) were standing on the pavement when a stoner couple staggered up.

"Like your shoes" slurred the woman to my stepdaughter.

"Oh wow you're Briddish... you're from Cheerio country"

The stoner couple eyed us strangely and then the woman changed her tack.

"You boyfriend and girlfriend"?

How do you respond to that? There is a forty year age gap. I like to think I'm not bad for my age but that's stretching it a bit.

"Eeewww" said Ella, which closed down the conversation and they staggered off into the night. 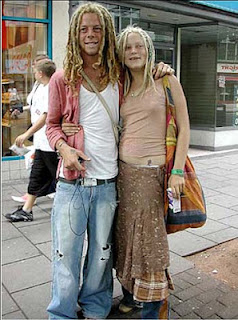 The day before we were due to leave I headed out to sea once more to dive onto the wreck of the USS Vandenberg. 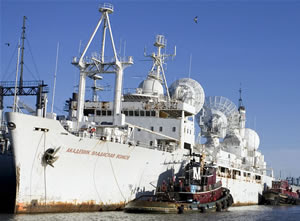 I had to go with a guide and because of the 100 foot depth it is only open to over fifteens. I had to leave Jamie behind. Not sure that he was all that bothered though.

Due to the early intimations of Hurricane Isaac, the visibility wasn't great and there was quite a strong current. We wore gloves as many of the things growing in the wreck could sting and possibly bite.

We swam in and out of the ship for nigh on twenty minutes, but the wreck was so vast we only covered about a third of it.

Back up on the boat heading back to shore I felt the warm glow of achievement.

Now all we had to do the following morning was get the hire car and drive back up the Keys to Miami for our flight home. Bearing in mind the trouble we had on the way here and the assurances we received from the airline nothing could possibly go wrong... or could it?
Posted by Alex Lester at 07:53

Looks like you had a great trip to the US. If you want to visit the Pacific Northwest in 2013, I plan to take the wife and a kid to the UK. We could have a home/car/currency exchange swap for a week or a little more and save some cash. Have you checked out the Louis CK (comedian) bit on airplanes and our ingratitude to technology? I think it was on David Letterman. Worth a look. Randy from Eugene, Oregon

Only saw one word, "shark". There's no way on Gods good earth you'd ever catch me diving.
Noooooo way!