STRANGER ON THE SHORE

My old Mum used to have a saying: "One day I'll have a really good go".

I think what she really meant was: "One day I may get round to it, although I have too many other far more important things to do before I get to this."

We used to give her videos for Xmas and birthdays and she would place them very carefully by her chair. This meant that the pile grew higher and higher over the years. It became a standing joke in our family that eventually the pile would touch the lounge ceiling.

My brother in law has shelves of DVD's of stuff that he wants to watch but is too busy doing more important and interesting things so he now just says: "I know they are there if I need them". We continue to give him yet more so eventually should he need to he can have "a really good go". 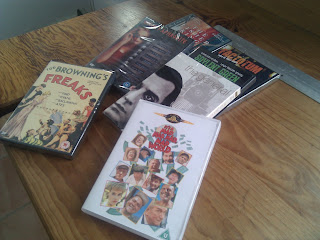 I have found that the Dark Lady and myself are getting like that. It is a fine relaxing way of passing the time to sit down with a glass of something and a snack and watch a good fillum.

Trouble is the amount of "fillum" is now outstripping the time available to "have a really good go".

We have managed to work our way through half of certain films such as:

"What's up Tiger Lily?", "The Ladykillers" and "Harold and Maud".

So it was with some trepidation that the other night we sat down to watch "Its a Mad Mad Mad Mad World".

The joy of catching up on old films is the bits you had forgotten from when you watched them as kids. (I don't remember Spencer Tracy being in it!).

Also they are fairly cheap to buy.

Earlier I had caught half an hour of "Those Magnificent Men in their Flying Machines" which was being shown on the TV and had wallowed in nostalgia and half -remembered bits.

(I don't remember Willie Rushton being in it!).

There is also a slight non-PC frisson in old films such as this. Which somehow adds to the fun.

In it the French are sly and lecherous. The Germans are crisply efficient (I had forgotten the pilot was called "Rumplestrosse" - deep joy!). The Italians were stupid with huge families and the British were pompous buffoons.

Things have changed and we tend not to think that these days, do we? Unless you are a tabloid headline writer or a football commentator, probably not. Although for the purposes of pub or workplace jokes old habits die hard.

Another shock in this nostalgia fest was that half way through the film there was an intermission and we had forgotten to buy any ice cream. Films seem to be better value for money back then...well they were certainly longer.

I remember once going to a cinema in London to see a Top Gun spoof that was so short they had to bung on a Mr Bean short first. Not a big Bean fan so nearly left the cinema before the main feature started as Rowan Atkinson mugged his way through an exam with a lot of searching for pencils and dropping things.

We watched the film over two nights and then moved on to a couple of Woody Allen's.

I used to be up to date with his work but now I am about ten years behind.

The next day we went off to Bexhill which is gradually trying and perhaps succeeding in shaking off the "God's waiting room" tag that it has laboured under for years, like many south coast seaside towns.

When I moved to Hastings in 1989 the estate agents would helpfully tell would be purchasers that a property was: "Within a level walk of the shops".

The De La Warr Pavilion in Bexhill is a magnificent art deco construction on the sea front and venue for innumerable editions of "Friday Night is Music Night". It has been refurbished in recent years and although it is rather stark, it is light and airy.

For the time being the roof terrace has been given over to an exhibition of "Bodies" by Anthony Gormley, the sculptor who is responsible for the "Angel of the North". The weird and sometimes wonderful fourth plinth in Trafalgar Square in London, which whenever I passed it usually had someone sitting in a picnic chair with an umberella up looking rather bored, now that is over, these days the plinth sports a rather fetching ship in a bottle. 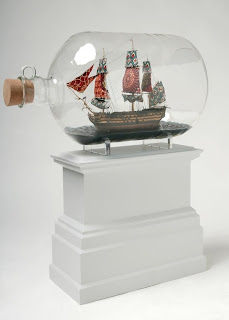 He also did the "Iron Man" up near the Town Hall in Birmingham which I rather liked for a couple of reasons probably not connected with the art itself.

1) It really annoyed people who thought art should look like photographs and sculpture should be all men on horseback or women in flowing gowns staring into the middle distance.

2) It reminded me of "Gort" the robot in "The Day the Earth stood still".

Still back up on the roof..

Apparently the pieces are all of Anthony Gormley and they are bent into uncomfortable looking shapes and placed seemingly at random in a health and safety nightmare. 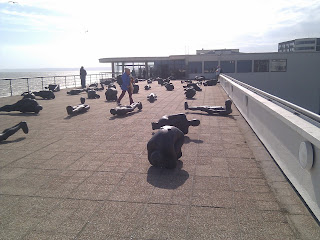 To be frank I don't understand art and have often thought that if you have to tell people what it is and why maybe it is not so good after all.

Then again it may be that art is designed to provoke a reaction.

Who can forget the Tate bricks?

We remember the reaction to it though:

The DL said it looked to her like something terrible had happened as all the bodies appeared to be in pain.

I said it reminded me of the excavated remains of Pompeii.

To complete the anguish we met up with my old mate Clive in the pub later and chatted about old films & municipal art until the karaoke started.

I tweeted about it. Along with art that is something that I have never understood.

Singing badly along to a backing track.

Having just written those words I am colouring slightly when I think of the times I have sung badly to a backing track.

In my defence this was for Children in Need. Well it was for charity, surely that is different. Or am I just digging a deeper hole here?

In the words of Neil Innes introduction to "Protest Song" : "I've suffered for my music and now it's your turn". 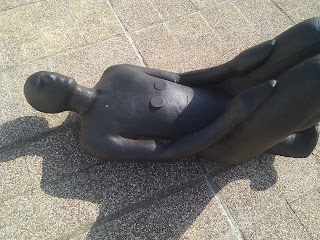 Some anthony gormely figures were placed in a river in Edinburgh recently - reputed to be able to stand for 100years - they fell over at the first high tide!! Someone put a Macdonald's uniform on one of them - not sure if that was why they fell over.

There are about 40 iron men statues on Crosby beach, Liverpool and they are dressed up regularly. Also the amount of times the coastguards are called out to someone stuck in the sand when its actually the statues.