BY THE TIME WE GOT TO WOODSTOCK

We were only a few miles from the festival.

The DL and I had been invited to Cornbury in Oxforshire. Remembering my last few festival experiences with camping in the pouring rain at Reading in the Seventies, staying in an hotel in Guildford for "Guilfest" a few times, and a day spent compeering a festival in Nantwich (during which Elkie Brook's son came to blows with the promoter) I was understandably chary.

So rather than rough it we opted to hire a "PodPad".

This struck us as a good compromise.

Carpet, flooring, electricity, quiet location with its own showers and toilets. Ideal for a middle-aged man with no sense of adventure and a love of creature comforts, despite having an altogether more adventurous other half. 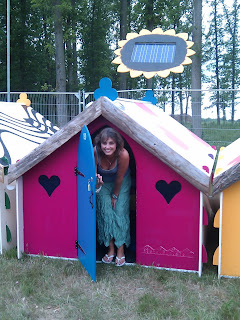 It was a Wendy House!

Still, it had an airbed and a useful shelf. Good place to put a lantern and the cough mixture.

Trouble was, every time the DL turned over she caught the shelf with her bum. She is not exactly over-endowed in the derriere department. However, it is enough to give a girl a complex.

We had arrived on the friday although there was not due to be an official start to the music until the following lunchtime.

We settled in and met our neighbours. A couple of women who seemed very nice but a little unsure about my hacking graveyard cough.

This had been with me for the better part of a week and had shown little sign of improving.

"Alcohol should fix it" opined one of the women.

Being someone who has always been aware of other peoples’ space and with a desire not to upset anyone, I was concerned that I would disturb our neighbours.

There may have been slightly more sound insulation than that of a tent. However, you could still hear every sound. I was certain that I could hear peoples’ hair growing at one point.

The following morning we upped and washed and headed off the half mile or so to the arena to catch the opening acts.

Tiffany Page was a rather nervous and self-conscious opener and, by the time she had got to the second line of the first song, she was so out of tune it brought an audible gasp from the DL.

She soon got into the swing of things but, to this old ham, I do think that artists should think not only of the music but also their interaction with the crowd.

If I had a £1 for every time anyone uttered the word "awesome" during the weekend I would have had enough to pay the cost of the PodPad. That includes the use of the word myself in a "tweet" about the festival later that day.

This festival isn't dubbed "PoshStock" for nothing. There was a Starbucks, a Jamie Oliver food stand as well as a Waitrose and plenty of Organic and Holistic type food and the obligatory Veggie stuff. All with the added festival price hike.

Things really took off when Buddy Guy took to the stage mid-afternoon. (excuse the poor quality pic, if you will)

Not seen him since I was a young man at a concert with the late Junior Wells in London in the 70's.

This was not a happy evening as I recall; I think they were both off their faces on something or other and spent much of their time howling with laughter and not playing very much.

He may be 73 years of age but from the first note he had us. He is a showman as well as a fantastic musician. He also boasted the largest drummer I have ever seen. He was huge and looked like he was playing a child’s drumset.

Cornbury may be described as a "family-friendly, chic-boutique festival" but it was still fun.

It ran like clockwork as well, with one act on the second stage ready to go as the one on the main stage finished. This meant a certain amount of traipsing about but it was worth it. Highlights of the first day for us were Buddy Guy, Dr John and Squeeze.

We sat outside one of the bars and had a drink as the sun went down and headliner David Gray came on.

I saw him a few years ago when he did a special show for Radio 2 at the hallowed Abbey Road studios in London. New album about to be released and he was amazingly...dull. What has happened to him?

He is very popular and I am sure his new record will sell by the lorry load. DL looked at me and I looked at her and we headed off back to our Pod in the gathering dusk. We were not alone as we trailed through the wooded park. Hundreds of other festival goers had a similar idea. It was like a tide of refugees carrying blankets and camping chairs look for safety.

Back at camp it was to bed for a fitful nights sleep. Me, wheezing and coughing and the DL bumping the featured shelf as she turned over trying to get away from the noise. Of my hacking.

In the distance we heard a resounding cheer as David Gray concluded his set. Sounded to us like a roar or relief that it was over.

In the morning the water didn't work in the toilets and the loos themselves reminded me of Reading in 1975. They would flush but that just stirred the deeply unpleasant blue soup that was already in there.

Jon Allen was the opener on the Sunday and we both really wanted to see him. As we joined the throng heading for the arena, a marshall stopped us.

"Where are your white wristbands?"

"No white wristband, sorry no entry"

We had to trudge all the way back to the entrance to join a lengthy queue of people buying day tickets, or people like ourselves who had not been given the correct passes.

We just made it as Jon was taking the stage. 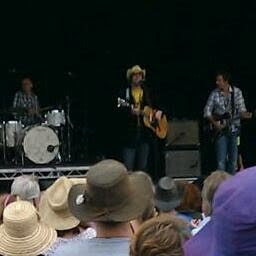 He started with a couple of acoustic number and then brought his band on. He just gets better this boy.

We were aware of a change in atmosphere since the day before though. There seemed to be more security. We noticed some "Tim-Nice-but-dim" characters lurking up by the coffee franchise. One was actually heard to say, "The fillies at Glasto this year were far superior to here". The DL nudged me.

He was wearing deck shoes! I blame the jugs of Pimms that were on sale.

We knew we weren't going to be able to stay too long on the Sunday so we were going to miss Jackson Browne, the headliner, as well as the Feeling as I needed to get back for the show.

We caught the Lucinda Belle Orchestra and witnessed the first two numbers by the Blockheads. The material is classic and ageless but Ian Dury is irreplaceable.

The lead singer was laying the Cockney thing on with a trowel and it didn't work for us it seemed forced, rendering them a tribute act. We headed off. As we strolled through the park, we noticed the dreaded Morris Men jingling in the opposite direction.

Phew! We were free and not a moment too soon!

Heading back to London we reflected on the weekend.

We had seen and heard some great music in beautiful surroundings. We had been blessed with glorious weather. The line-up had been patchy but it was not time wasted.

Jon Allen tweeted that David Cameron had put in an appearance on the Sunday, which may explain the extra security.

With that news, any last vestige of teen festival-goers rebellion immediately was extinguished like a bucket of water had been poured over it.

Although we are not sure where they would have got the water from.
Posted by Alex Lester at 17:39

Where did politicians get the idea that they have to be 'down wiv da kidz innit.' The first (and last) festival I went to was Knebworth in 1979. Can you imagine Margaret Thatcher turning up to listen to the mighty Led Zeppelin? No, thought not......

When you mentioned a wendy house on Twitter I though you were exaggerating, now I see you wasn't!!

Cute wendy houses but can't imagine there would be much chance of hot romantic sessions with the others being so close - or does everyone just go for the fab music!! and how come it wasn't your posterior knocking the shelf - where's you manners man, you should have taken the shelf side.

The Dark Lady looks really pretty. You must've worked some charm on her!