Relationship milestone. The Dark Lady was bringing her children to stay for the weekend.

It was also her birthday so had to make sure that our first anniversary-type event was a success and as stress free as possible.

I had - in a true "cloak over the puddle" romantic stylee - given her a food mixer for her main present, as she has just had a new kitchen fitted and is a brilliant cook so really wanted one.

Her friends were disappointed that I had not showered her with jewels.

If they had checked out the previous blogs they would have been satisfied that she didn't get a wheelbarrow, like my friends did when they married at the tail-end of last year!

What is it with women and jewellery, anyway? Why does a sparkling rock mean more in some quarters than a Magimix?

I did get some other more romantic type stuff as well, including a painting which I bought at the St Michaels Hospice arts fair. This is an event where local artists exhibit and sell their work and the Hospice gets a fair percentage of the sales. I have been involved with them for years now and always end up buying a picture or two. I am running out of wall space so friends and family are starting to expect pictures.

The "other romantic stuff", by the way guys, did not include service station flowers and some items from the Ann Summers catalogue. I like to think I am better than that. Although you may argue, a foodmixer is not going to cut it in the romance stakes.

Not aware how many items of white goods and general kitchen equipment actually do.

"Oh Rhett...Rhett. Will we ever get back to Tara?"

"Frankly madam, without a Kenwood Chef...I don't give a damn!"


Friday night we went to see a tribute band the "Kings OV Leon".

Ella (14) and Jamie (11) are huge fans of the real thing so it was going to be interesting to witness their views. 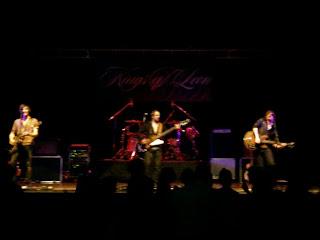 Tribute bands seem to come in two forms: The ones who look like the band. And the ones that sound like them.

It is considerably easier to be a Queen tribute act, for instance, if you have a camp lead-singer with a white jacket, half a microphone stand and a big moustache.

I heard of one tribute act who was Alice Cooper AND Meatloaf. Just hope that he wasn't eaten by his snake halfway through "Dead Ringer for Love".

Saw a poster for a tribute act the other night who was Lady Gaga and Amy Winehouse.

A witty combination, no doubt climaxing with her falling drunkenly out of what little clothing she is wearing.

They were late on stage but before they had even played a note, drunken women were dancing down the front.

The Kings ov Leon had a northern lead-singer, which was a little disconcerting when he did the stage announcements. I bit like hearing a Yorkshire Willie Nelson.

They did sound pretty much like the originals, though, and got a qualified thumbs-up from Ella and Jamie, with Ella pronouncing that one of the guitarists (not sure which one he was meant to be) was "hot".

Saturday and it was off in the sunshine to enjoy the fleshpots of Hastings. It is a terrific town for children as it has miles of seafront and a funfair as well as cliff lifts.

So it was to the fair and the Go Karts. I had forgotten how competitive children can be as the two of them tore round the track until there was a shunt, complete with equal and opposite recrimination. 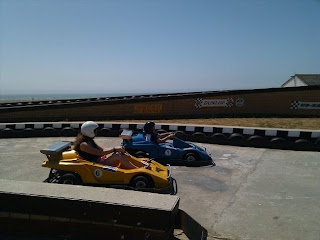 Then it was to some huge ride that makes most people’s hearts sink.
It was called the Equinox.

The effect I imagined would be like someone trying to tear your limbs off in a spin dryer. Whilst simultaneously attempting to twist your head off. 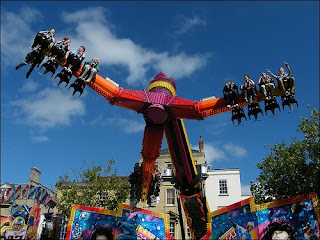 Ella's eyes lit up. She loves these rides and I think probably wants to be a base jumper or a test pilot when she is older. However, she didn't want to go on it alone.

(I know your game, buster. You were wisely horrified at the thought of being spun through the air until your brains seeped out your ears. You are no mug!)

Three sets of eyes swivelled in my direction with an audible squeak.

So it was that we clambered into the seats and the safety cage/harness was lowered over our shoulders to lock us in position so we couldn't fly out. Further embarrassment came when the operator had to force my safety harness shut as my stomach appeared to be in the way. Too much centrifugal force and they would be hosing down Hastings Old Town for weeks after.

Off we went and it was truly, truly horrible. Up, down, sideways, backwards.

I wisely kept my eyes firmly shut the whole time.

After an age it slowed seemingly to a halt. "Thank God for that".

Then bugger me. It started off again.

If you ever want a value for money ride try The Equinox It lasts for hours and hours. Or that may just be my take on it.

Feeling slightly queasy, and with Ella beaming broadly, it was time to find some other hideous torture.

Dodgems. These I can cope with. I was cool, I was in control.

Bit disappointed that the blokes running the ride appeared to be about 15 rather than the tattooed gum-chewing stereotypes with the quiff and the permanent fag drooping from their lip. That is all part of the Amusement park experience.

I deftly weaved in and out of the other traffic. Mainly, but not always, avoiding being smashed to a bloody pulp by an eleven year-old boy with an evil grin who kept appearing out of nowhere. 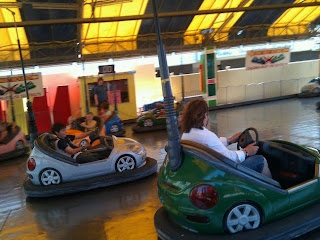 "Beat you" said Jamie, when the ride was over.

I may have 43 years on the little chap but some things offend my middle-aged dignity.

There! I think that told him!

Up the East Hill funicular railway for a lay down on the grass and an ice cream.

After that it was back to the house, stopping off for a paddle in the sea which was surprisingly warm and we reckoned it was far warmer than our dip in the sea at Asbury Park at the tail end of "American Adventure 3" in May.

This proved, like the ride, to be another mistake.

This year I have been suffering from terrible Hay Fever and the grass pollen finished me off.

For the rest of the evening we sat, watched TV, and I sneezed.

Dressed some crab that we bought from one of the many fishmongers in the Old Town.

Ella hid in the spare room downloading the bulk of my CD collection on to her iPod.

Jamie talked about Tanks and Militaria and I sneezed.

Had a glass of wine and sneezed.

The DL gave me most of her tissues. The ones that Mothers keep in their bags for wiping children with....and I sneezed.

Then I had a brilliant idea:

"In my estimation, this sneezing is actually due to a deep-rooted allergy to fairground rides. So sorry I can't go on any more again as they make me ill"
Posted by Alex Lester at 17:38

Magimix for a birthday present? Don't fancy being in the vicinity of your house on Christmas morning when the wrapping paper is torn off by the DL to reveal an iron or ironing board or toaster or pressure cooker......

Great blog; what's wrong with a magimix - although if DL is such a good cook you might not fit into the next showground ride - how embarrassing to be refused a seat on the big dipper (or not, perhaps). and proof, if needed, that men never grow up and the need is always there to win on the dodgems - even if you are competing with an 11 year old!!

"I've got a bad back" is a good excuse. I have a teenage niece coming to stay and she's insitant on me taking her to Brighton.. I'm going to show her all the trendy shops and avoid the pier and the horrible rides that threaten to fling you into the briny like the plague!

Wish the Mr would buy me a Magimix.
Yes, the Mr. Not "The Wife" as you hinted at on your show licking my eyelids. I nearly drowned choking on my tea. Mandletoad is a laydee, contrary to what my workmates think (drastic haircut).

A Magimix for a present, what a brilliant idea. You can't eat a lump of rock or shiny (expensive) metal. Great choice - ENJOY sampling the results.

NB: According to previous bloggs - you have a back problem. Thus YOU should NEVER EVER ride on fast rides (VERY VERY BAD FOR BACKS!).

Well!!! Alex I think you will find I thrashed you on the Dodgems as I am obviously a very experienced driver at eleven years old! From Guv'nor / Jamie

I agree with Annie's comment - the Jamster has got you sussed - bow to the kid, DL!!