RUN AND GET THE FIRE BRIGADE

Dark Lady and I went off to the Midlands over the weekend to see some friends who run a flying school; there was a special event on at Halfpenny Green airfield near Wolverhampton to commemorate 100 years of aviation in the area. 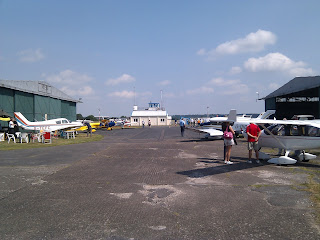 The sun shone and planes of all shapes and sizes buzzed around the skies. It..(koff)...was a good day to be al...al....(choke) alive!

We were there for most of the weekend and, for most of that time, a man was mowing the grass. As you would imagine on an airfield there is a lot of the stuff and it has to be kept down.

Over the years I have become rather more sensitised to grass pollen. This is divine retribution for my schooldays when I would scoff at my red-eyed, wheezing friends and tell them to get a grip. They are laughing on the other side of their purple faces now, I can tell you.

Sunday and we headed off down to London. The DL was keen to know how England were getting on. We stopped at Oxford services on the M40 and, as we walked into the main building and saw the slumped and dejected public sat staring at strategic screens, we knew it was not going well.

"One- love. Er Love" I said, with my usual grasp of footballing regulations and scoring. I'm sure they'll pull that back. I remember back in '66 when...." I was shot a look which said it was wise to stop now when I too was only "one - love".

By the time we got home it was 4-1. Maybe I am becoming a fan after all but by now, I was feeling distinctly wiped out and crawled into bed feeling rather "worn". Perhaps it was the disappointment of our dismal showing that made it feel like that.

In the morning the voice had gone croaky and the coughing had started.

Sea air was what was needed so I headed on down to Hastings after the show to let the ozone blow away the cobwebs. 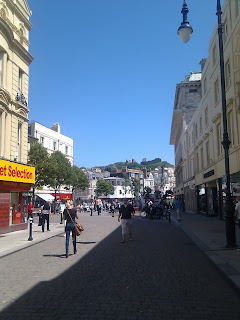 With the weather so nice obviously it was time for a stroll along the front. First, I had important work to do: CD filing. After putting half-a-dozen on the shelf I felt too knackered to do any more and my favourite displacement activity rose to meet me.

I had two episodes of Chuck, a BBC 4 documentary called Rude Britannia, as well as Frost on Satire to watch. It contained an interview with one of America's last-surviving liberal voices, Bill Maher, who delights (along with Jon Stewart) in pricking the pomposity and exposing the lies of the establishment.

We need more of that sort of thing here, in my opinion. It was amazing to watch archive footage of the That Was the Week That Was and to look at the topics they covered.

Can't think of anyone who is doing that these days apart from Bremner, Bird and Fortune and - correct me if I'm wrong - they don't seem to have been on for awhile.

By now the hacking cough had been joined by a cold and comedy sneezing.

I was not alone either. The DL started to go down with it and, listening to Chris Evans, Moira Stuart was also croaking her way through the news. Still, I was first, I thought. This was borne out by Aled Jones thanking me for giving him my germs.

I comforted myself with the thought that, top man as he is and talented too, if it resulted in just one fewer rendition of "Walking in the Air" my work here on Earth was done! 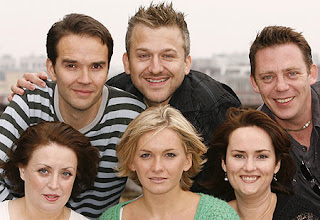 Wednesday and I hauled my aching cough and cold ridden body along to see a showcase by The Unconventionals, a 6-piece close-harmony group. I have featured them on Lester's Library in the past and their first album is about to be released. I am in awe of music and musicians. It is often said that DJ's are failed musicians and, in my case, this is certainly true.

They were terrific, if slightly kitsch in their delivery. They went down a storm with the battle-scarred cynical audience of media types.

It had us bemoaning the lack of TV variety shows. There are few outlets for acts of this type any longer. Back in the day they would have been a staple of Seaside Special and Pebble Mill at One. They are due to make an appearance on GMTV soon. By then the Lester germs will doubtless have reduced their fine vocals to a thin croak. 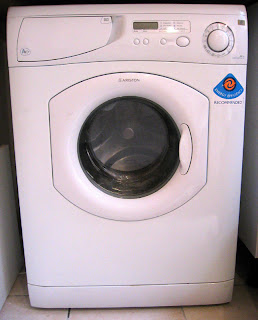 A listener noted that on Twitter the other day that I didn't live "The high life" as I mentioned a terrible laundry failure at the flat I rent. I am extremely fortunate in having a job I love. However, not for me are Limo's and Personal Assistants or even an "entourage". I am a bloke so I don't need any of this stuff, I even do my own washing. (My Mum died 7 years ago so, alas, she is no longer around to pick up after her "little soldier".)

So duly loading the weeks smalls and not quite so smalls into the machine it was with some consternation that upon my return at the end of the cycle. The machine was still full of water and had halted mid-cycle. No amount of wrestling with the controls made any difference. Gathering my bath robe and all the towels, I had opened the door and tried to mop the suds.

Another cycle and the same thing happened. By this time, I was wringing stuff out in the bath in an attempt to find any textile that would absorb liquids.

One last go…and the machine worked a treat and has performed without complaint ever since.

Perhaps I have a new power brought on by the coughing, the sneezing, the germs and the pollen.

Excuse me if you think this is far-fetched. Peter Parker got his Spiderman powers after being bitten by a radioactive arachnid.

Thursday, and after another wheezing and coughing morning "pulling the triggers on the 45's" and another (failed) attempt to boost my profile - this time by turning myself into a "shock jock" - it was back to the flat.

Where I live is not at the high-end of London rented accommodation. It is a nice flat in a block of similar one-bedroom abodes. However, I think that in order to make as much as they can, landlords cram a lot of people into the apartments.

There were a dozen or so people milling around in the street when I arrived, an ambulance and four fire appliances also.

One of the flats had caught fire whilst I had been at the studio and its occupants and those of the flats either side had taken refuge outside.

So it was to bed in a flat that smelled of bonfire. Although, for some reason, it didn't make my cough any worse! 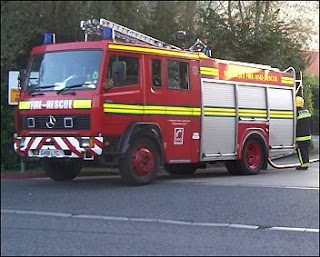 What a trojan you are DL, soldiering on to keep us entertained throughout the night - we do appreciate it - and of course your germs can't get through the airwaves; Am impressed that you pass your coughs on to Aled Jones - nice lad, all the better from getting some your germs, I suspect - but hey, how did our Moira get the dreaded lurgy - what have you been up to, naughty boy; she sounded very sexy on Wednesday but unlike you seems to have taken to her bed and left us with dear Alan Deddicote; none of that from you though, you keep going and keep letting us know all about it. Suggest you get the Dark Lady to rub something into your chest over the weekend, that might shift it - but if not it will be pleasant anyway. Keep going for the sake of the show - or perhpas old boot by now (the problem could be lack of socks and open-toed sandals)

Good blogging as per usual. Nothing but the best! That was one thing I never liked about flat/apartment living. Could you trust the neighbours with their chip pan? Maybe its irrational, maybe not.

And thanks for playing my library track!

Another fantastic week Alex sorry you are not well but very greatfull you did not take to your bed like some would you are a true professional. Do you think it is now time to start thinking about the winter truck writing slogan.Loved the blog and love the shoe

I was wondering if you had been to see the "Rude Britannia" exhibition at Tate Britain and if so, what you thought about it?

Good to know you you are accomplished in the art of washing (if not ironing).

Always look forward to your blog - thank you!

Wow! We had a big fire down the road in Horley, loads of people evac'd but not us, I just got the benefit of watching hunky firemen to-ing and fro-ing.. scary when its your own block tho.

My hayfever has been terrible this year, wake up with a head full of gunk. I do sympathise...