It’s amazing how one’s fortunes can change in the space of 24 hours. Thursday night, I spent a sublime evening at the Royal Albert Hall watching Jackson Browne run through his repertoire playing two sets that spanned his career. Now there was a value for money gig. He brought Californian sunshine to the old place and from where we were sitting still looks about 36 rather than 60. Must be a macrobiotic diet or something. He even did his version of "Stay" which I didn't expect. Went with my mate "Susan the Finance" (Remember her from the ABC concert? She is not in banking so don't hate her). She left her old man at home with her mother in law. The Mother-in-law had to be placated when she boomed "You are going to a concert unchaparoned, with another man?!!!!!" Swift but not very accurate thinking followed: "Don't worry, he's gay"!

Now I am not remotely concerned by this. Am totally unable to see what the fuss is with a valid and alternate lifestyle although one that is not for me. I try but can't understand the anti- gay "marriage" lobby. When you get to my age and you are not married people sometimes ask the "Gordon Brown question" , if you remember Sue Lawley asking him why he wasn't married years ago on Desert Island Discs. I remember at the time my late mother remarking on this and when I said that people sometimes made this assumption she chortled and shook her head and said "Ridiculous...........you're not are you?". When I explained that one of my friends had similar questions posed by his parents she said "Well I always knew he was". This wasn't the case either. When we met for a drink one night and I told him what my old Mum had said, he told me: "Well my folks always maintained you were gay despite you having a girlfriend". Seems people will find a way to make the case fit.

So I was "out" for the evening with Susan the Finance! 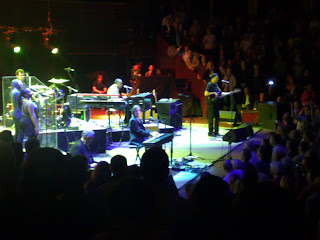 Friday night and it was time for another "Nerd Night". I have written about these in the past. People from the world of broadcasting get together eat and drink too much and bore the pants off each other with industry talk and slanderous comments. Good to see some new people along for this one which was held in London as well as some of the old faces. Made a new friend in Joel Ross, one half of the ex-Radio 1 duo JK and Joel. He won me over by slurring how fab the show was before he crashed to the floor. Andy Warrell my producer made an appearance and bummed £20 off me as he had drunk the contents of his wallet before he arrived. He said he enjoyed it and was looking forward to the next one......in London. This could be a year or more away. His diplomatic timing was perfect. Matthew Rudd, who travels so many miles in pursuit of radio work that Norman Tebbitt has a picture of him on his fridge stayed over at my place and after a rather less than successful breakfast as the local greasy spoon was shut so we had to go to a "cafe". I am sorry but you can't eat bacon, egg, beans etc off square plates. Its not...its not...British! We headed off to Heathrow where he was due to catch a flight to Manchester for one of his many radio shows and a nightclub gig. He is not scared of flying but terrified of ending up on the wrong plane. He is a big boy with a tongue in his head but is convinced that to the check in staff "Manchester" on the ticket may look the same as "Addis Ababa". On the way out on the tube deep in conversation (well he was talking about Hull City and their chances of staying in the Premiership and I was staring fixedly into the distance and trying to count the number of chimney pots on passing houses) we stopped at an above-ground station and a bloke got on with a guitar. "Hi I'm Gareth and I'm going to play a few tunes for you...unless anyone objects when in that case I won't." Now not wanting to deprive a busker of a chance to earn a living, being cooped up in a railway carriage with a bloke murdering "Knockin’ on Heaven’s door’ when you have a slightly sore head, wel,l some frightfully un-British action needed to be taken. Weighing up on balance the loud, probably off key cover versions and more football talk and suddenly "The Tigers" seemed the more attractive choice. Politely I said "I would rather we travel in silence if that is OK with you". A few people in the carriage smiled and I am sure many inwardly cheered. "Gareth" got off at the next stop. 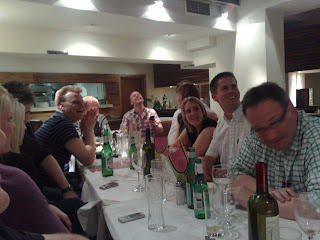 Back in Central London I linked up with Martin Emery, yet another DJ who was left rootless and with time to kill before his flight on Saturday evening. So we met up for a sandwich and decided to take the Thames Riverbus down to the 02 Arena, formerly the Millennium Dome/White elephant/waste of taxpayers’ money etc. Those boats don't half go at a lick and we sat in the stern and let the wash flick up and drench us as tourists jabbered excitedly in a variety of tongues. Got off, had a saunter around and came back again. Squelched off in our separate directions and I headed back to the rental flat for a bath and a change into some dry clothes. 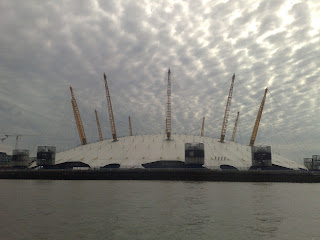 Whilst I was lying there I hatched a plan, as it was a sunny day, to walk the 4 miles from the flat to Shepherds Bush Empire for that evening’s concert. The Jubilee line on the underground was closed for maintenance so it was a faff to get there without walking a mile to the nearest working line and changing a few times, so I set off thinking. "If it takes about 90 minutes to get there, I reckon I should arrive about 8.15 so will get some of the support act, a drink and be ready for the headliner - Texas whippet-thin albino blues/rock guitar legend Johnny Winter. I should have read the ticket more carefully. When I arrived more or less to the minute of 8.15 he was already on stage. He is only 65 but has had a whole host of health problems maybe as a result of a much publicised heroin addiction in the 70's. At the risk of sounding like I am firing off a load of possibly offensive pigment related puns, the poor man was a shadow. His guitar playing was still pretty good mind. However he can no longer stand for long periods so played seated. He also scarcely acknowledged the audience, it seemingly being an effort to speak. He also wasn't helped by a thundering rhythm section that threatened to overwhelm what he was doing. The crowd was very thin too. Never seen the Empire so empty. When I visited the loo the bloke next to me remarked that he looked so ill that he may not make it to the end of the gig.The show was all over by 9.30pm and it was sad to see a man a pale imitation of his former self. I have been a big fan of his stuff for years and it was such a shame to see him obviously so unwell. 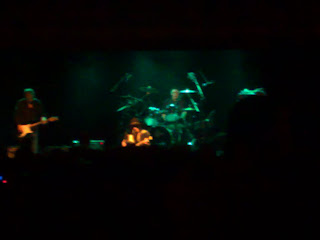 Hi Dork Lard! Your Nerd Herd nights sound quite fun. Nothing like talking shop with like-minded people while eating a good (hopefully!) meal and knocking back a few libations. Have a splendiferous weekend!

And that was a party political broadcast on behalf of the Liberal/Conservative Union of Unattached DJ's.

Have a mighty weekend!