Time to link up with Libido Boy again as I hadn’t seen him for a few days and he is always entertaining. He dropped by in between the usual round of wooing. He was wondering about hats in the sunshine thinking it would be a good idea to wear one, but he couldn't make up his mind which one would suit. Baseball caps he said made him look an idiot. Despite spending a year in the U.S where his children now live, he was never drawn to the baseball look.

Taking a straw poll of young things in the office (Lisa Smith). maybe one of those sunhat type canvas things that fishermen wear or maybe a flat cap in black or grey but not check she opined. He said he was thinking of heading in the direction of a straw boater. Noooooo! You will end up wearing a stripy blazer and white shoes looking like a chinless ninny from the 1930's: "Anyone for tennis oooh I say"! He admitted that he already possessed the shoes and the blazer! No Simon it is just plain wrong. How about a fedora or a big straw sunhat? Nope you will end up looking like an elderly cricket fan the type that stand at the bar jingling their car keys and talks about "the little woman" and asks "What's your poison?". He had a top hat when he was 15. I borrowed it for a photo that you can see on the MySpace page which was taken at the Reading Festival in about 1975. - when we were both slim enough to model the "Artful Dodger" look. Any suggestions as to what ‘Headgear He Should Adopt’ comments gratefully received.

He had arrived so we could go and catch Toots and the Maytals. (Pressure drop. Monkey Man. 54-46 that’s my number) We are both big reggae fans. Nice diverse audience at a very hot Academy in London's Islington. As a standing venue we were concerned as ever that we would not be able to see. However the stage is very high and we were leaning against the bar, so the view was pretty good. The sound was good. The beer was expensive and the atmosphere was electric. We suddenly noticed mid way through that there were two middle aged men skanking like good un's. It was us. We looked ludicrous but wearing Straw Boaters or top hats we would have look far, far worse. 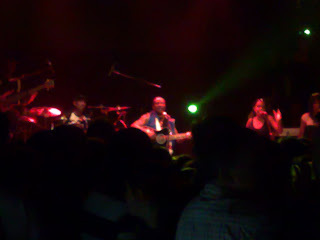 Later that week I got the chance to link up with American Singer/songwriter Nell Bryden who breezed into town after a short and generally successful short tour around the UK. Although she said that one gig she did coincided with there being a hen night party in the audience. So she was forced to play as a crowd of drunken young women screeched and cackled and threw dildo's at each other and her and the band. Hmmm perhaps that is what they mean by an "intimate venue".

It was good to catch up with her as I have had a present to give her for several months now. Being a worldly wise New Yorker you would have thought she had seen and done it all even at her tender age. No he noticed that her 'Briddish' swearing was not up to par. So as all performers know there comes a time occasionally when there is the need to face down a restless crowd so she needed to be able to give as good as she got. With this in mind a friend of mine Rory McAllister from BBC Berkshire who is well connected within the world of comics, managed to get me a personalised copy of a spectacularly rude book from the lovely people that write, draw and publish VIZ. You may have seen a copy on a top shelf in your local newsagent. The people at the magazine had very kindly drawn some of their most famous characters in the flyleaf especially for her. She was very touched. 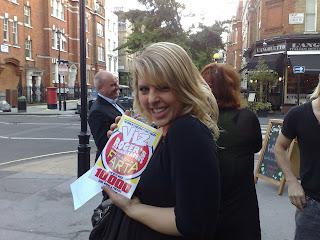 If you are of nervous disposition don't go and check it out you will be offended. I can still remember during the 80's when a friend of mine worked for "Mayfair" magazine a rather more obvious top shelf publication. One of his journalistic jobs was to compile the jokes page. My Dad told him a joke that he hadn't heard and he published it in the mag. My Father relayed this info to my Aunt and Grandmother with the words "don't go looking for a copy. It is not your sort of thing" fell alas on deaf ears. Shortly after that Granny sent a stinging rebuke to her son which contained the immortal words: "I was so disgusted that I felt like putting it at the bottom of the dustbin with quicklime on it and apologising to the bin men!”

The weather in most parts of the country has been exceptional in the past week and I have made full use of it walking too and fro across the park after the show, and when I come back into the office during the day, for as I outlined last week for some gossiping and Machiavellian scheming. I have had a chance to observe nature in all her glory. Which means squirrels magpies and acres of sizzling human flesh sprawled on the grass.

Popped home to Hastings on an early train. This is always a bonus as I can ‘scarf’ up all the newspapers that commuters leave behind on the inward journey. This meant that I had a free paper fest heading to the coast until I got to about Battle. I then promptly fell asleep. Missed my stop and ended up at the end of the line. This meant a mile walk along the seafront. It was glorious and it made me realise why I love the place so much. I toyed with the idea of having a swim. Dismissed that and then toyed with the idea of having a paddle. Nah. Went home and watched an episode of 'My Name is Earl' instead. 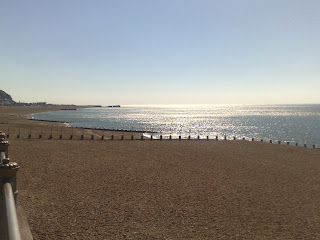 and tell Libido Boy that the only man who looks sexy in a hat is Indiana Jones...everyone else looks ridiculous...

I can remember falling asleep on the train home when I worked in London, missed Basingstoke and woke up in Salisbury - not an easy walk home unlike you!!

The weight must by dropping off by the to... erm, pound, with all this walking you're doing!

Alex, todays exercise is tomorrows hip/knee replacement. Be happy in your curves and take care!

get libido boy in an australia hat. good in sun, great in rain and v sexy - if you can master the smouldering look from under the brim! x

Is Libido Boy cool enough for a Lester Young pork pie? (hat, that is!)

Reckon Libido Boy has never been so popular, but there again......

I think Libido Boy should have his own radio show...

Maybe Libido Boy could cover BTOTD during the next American Adventure? Instead of Dark Lord, he could be Salacious (K)night

But what happens if we like him better then Alex?

Really Cherdmed. You should be ashamed for even doubting your loyalty. Like him better than Alex indeed. Tut tut.

Although anyone called Libido Boy does make me more than a little curious.......

tailendcharlie...anyone named Libido Boy makes me EXTREMELY curious and who said I had to be loyal to Alex...hahaha