WILL YOU NEVER LEARN?

"Blubberwatch" is not going very well frankly. This is mainly due to a lack of willpower. Not sure what to do. Eat and drink less seems like a pretty good idea. However if you are as weak-willed as me it can be a bit of a struggle. With that in mind I have been doing more exercise and trying to eat more sensibly. However…..

Friday night and it was an evening of unashamed nostalgia as I returned to the legendary 100 Club in London’s Oxford St. I have only been there once before back in 1978 to see Eddie "Cleanhead" Vinson - a blues singer and saxophone player. His back up band "Rocket 88" that night included ex "Roogalator" guitarist Danny Adler (remember Cincinatti fatback?...oh..you don't) who once passed himself off as bluesman Otis "Elevator" Gilmore and allegedly fooled record company execs into thinking that the tapes were from a long forgotten authentic black bluesman. Charlie Watts of the Rolling Stones was on drums and I stood next to him in the gents. It was a great night and as I revealed on the show I reached under my chair for my beer to find a guide dog drinking it. I wonder if the dog managed to find its way home that night. There can be few more dangerous things that holding onto a drunken Alsation for grim death as it staggers about the West End looking for a fight or maybe a kebab to finish the night off with.

Not sure that the club has changed at all over the years. However it is a great venue for live music.

Not seen "Libido Boy" for a few weeks so it was good to link up with him again as he came to stay before going out on another lukewarm date the following day. This is where the willpower collapsed. We were hungry so decided to eat Chinese. There was a choice of places both offering "All you can eat". One was vegetarian and the one we chose that was right next door wasn't. It advertised "real meat". I have never learned that "All you can eat" is not a challenge. There then followed a horrible exhibition of gluttony as we both tried to get value for money. Having eaten the contents of the restaurant we waddled into the club and plumped ourselves heavily down on a couple of rickety chairs. Think they may even have been the same ones from my previous visit. The tables too looked like they were. Who were we there to see?

3 Bonzos and a Piano. A splinter group from the Bonzo Dog Doo Dah Band of "Urban Spaceman" and "The Intro and the Outro" fame. The three in question were saxophonist Rodney Slater, drummer Sam Spoons, & multi instrumentalist and man with robots Roger Ruskin Spear. Although I was too young really for the Bonzo's first time round over the years, I have become a devoted fan. 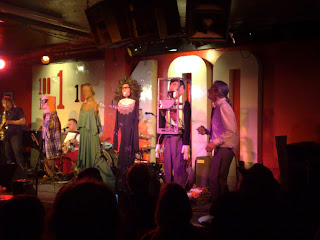 To say it was a weird night was an understatement. Due to large number of props involved, the gig was "haphazard" to put it mildly. This included missed intros and lyric amnesia. I think if I had been to see any other act who kept having to restart tunes and had robots that in some cases singularly failed to do what they were supposed to do it would be annoying. The guys have so much charm that it didn't matter at all and the audience loved them. We had to prompt them on occasion as to where they were as we were all big fans and so knew the words where they had forgotten them. It was also interesting as it gave me an insight into why certain things on the records had escaped me over the years. It is all a big audiovisual thing. The records only give you half the story. So if you get a chance to see them, do. It is haphazard but who cares, we certainly didn't. A guy called David Christie is involved in writing the "Doo Dah Diaries", the story of the Bonzo's. I was surprised that they didn't do "the hits" and tended to stick with the earlier jazz covers such as "Jollity Farm" rather than "Mr Apollo" and "The Canyons of your Mind". Seems they prefer these and former member Neil Innes prefers to be a bit more "ordered". 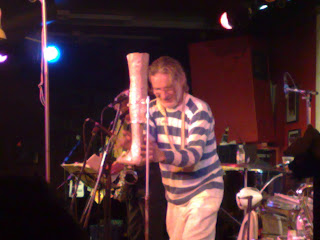 Not sure if it is an age thing. I have never been into gardening which I have always found a terrible bore. As children my sister and I were dragged around seemingly hundreds of stately homes in the rain and squelched round acres of neatly laid out lawns and flowerbeds in the name of "a grand day out". If it’s Thursday it must be Shugborough. Ah bugger, not Chatsworth again! However met a friend up in the Midlands for lunch and in order to "aid digestion" we visited Coton Manor. It had some fine gardens as well as a selection of exotic rare breed type chickens. There is a garden school there and all sorts of horticultural stuff. My mate is very keen on gardening and to my consternation I found it quite interesting. Is it me - am I getting old? Am I going soft? I will be trying to get a job presenting "Songs of Praise" at this rate.

There was however a rather impressive bluebell walk. So I felt quite summery and at one with nature by the time we got back to the car. It is still going to be a while yet before I feel mature enough to pick up a trowel. 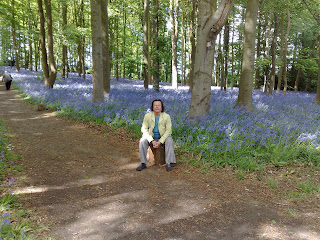 Ah, the heady days of 'The 100 Club'. Back in 'the day' Friday/ Saturday/ Sunday nights/early mornings would find me and my mates in and out of both 'The 100 Club' and 'Les Cousins'. From 6pm Friday evening until the early hours of Monday morning we would be immersed in the music.

Did you know that Bob Dylan was once refused a gig in 'Cousins'.

My favourite 'Cousins' man was Jackson C. Frank, who would sometimes have Sandy Denny up there with him. The Lady in the Red Dress.

I last visited 'The 100' about a year ago, and nothing had changed.

Re Blubber Watch - as mentioned before on your 'blog comments ', I have some dvd's by one Paul McKenna on 'I can make you thin'. It's a bit razzle dazzle for me, but if you'd like to try that one, you're more than welcome. And yes, he does click his fingers at willing participants.

Love the photo of you sitting in front of the bluebells Alex!!

Get two second hand bikes. Use one for your commute from home to the station and the other for the commute from the London terminus to the BBC

Locking them at the stations should make them fairly secure.

Over time the daily exercise will do the trick.

Thanks for your spot-on observations of our show at the 100 Club - we had a great time too! Roger was live on KOWS.FM (a California radio station) last night and he mentioned your blog comments. The presenter, Stephen, then got your programme up on his computer and commented that you were playing Jools Holland at that moment.

If you get a moment, please let everyone know THREE BONZOS AND A PIANO are at the Brighton Komedia as the closing act of the 2009 Brighton Festival Fringe. I only ask this as Zoe Ball, one of our local girls, mentioned on her show she would be going to the Brighton Beach Boys gig this Friday & Saturday (they are playing Pet Sounds & Sgt Pepper with with orchestra).
Your perceptive comments on our gig have caused us to re-examine the show and see where we can tighten it up!!

all the beast - and thanks for some great music

Dave Glasson (the piano in THREE BONZOS AND A PIANO)

Forgot to mention the date THREE BONZOS AND A PIANO are playing at the Brighton Komedia - it's next Monday - Bank Holiday Monday 25 May. Show starts at 8.00pm. More details on our website: www.threebonzosandapiano.co.uk

I should also have mentioned I posted your blog onto our website for our fan-base to read. Our neighbour is a huge fan of yours and became quite ecstatic when I mentioned you had blogged about us!

Are you sitting on a suitcase in the bluebell wood?.....do you carry one a t all times in case you need a rest stop?
Is that 'cause you is old?

With the way you walk your socks off, if you appeared on Britain's Got Talent with walking as your "talent", you'd get three Yesses from the judges.

Its the same with me. I need to change tack as my leg muscles are strong, and yet the tyre remains. So, I reckon its time to get the upper body to work. I'm thinking either swimming or weights. Now that sounds like gym work and effort, and I'm not fond of either too.

So if anyone has an answer to that one, I'd like to hear it too!