THE MARCHING SEASON HAS BEGUN AGAIN

Having failed miserably at Blubberwatch due to inertia and lack of willpower….Question: "How do you increase willpower"? Answers please on the comment section. I would really appreciate that.

Thought now the spring and early summer weather was upon us - i.e I woke up and the sun was shining - it seemed a good idea to go for a good trudge. I have reverted to walking through the park again after the show and when I come back into the office during the day.

Yes shock horror I am here for more than the three hours per day. Although a lot of the time in the office can be spent chatting with people and gossiping and also a fair amount of Machiavellian plotting but things do get done like listening to CD's, emailing people, and writing this blog. It is 3.20pm as I type these words. So it is not exactly a three hour day.

Having said that I will put my hand up and admit that it is not exactly hard work either. I am blessed. I can still remember my attempts at hard work which involved being a clerk at the D.H.S.S and working behind the bar in a pub. This is where I learned just how rude people could be and why all the fun is the other side!

Still , digressing as usual ; back to the trudge: Within a stone’s throw of my flat that I rent (I hesitate to call it a "second home" due to the negative connotations of that term just at the moment) is the Regents Canal. Down onto the towpath and head in the direction of Camden Lock and further on to East London. It is an interesting walk which takes you past London Zoo and the aviary with deafening peacocks, other exotic creatures and the smell of guano.

Peacocks are a prime example of the flawed way nature works. Why make something so beautiful and give it a voice like that with all the shrieking? A bit like Naomi Campbell I suppose. After Camden and its fabulously exotic creatures who work on the stalls on the market there, I have a theory that Camden is filled with these people who are very concerned with their "look" so much so that when I have been down the pub there on a Saturday or Friday night you get the impression that because everyone looks so different and have spectacular tattoos and a wardrobe that means they can only live and work in that environment. They would look so out of place by the time they reached Islington that people would point and stare. Seems things are drifting but a few months ago everyone was aping Lily Allen and Pete Doherty. However looks like the ball gowns and the little trilby hats are waning. Wonder what the summer will bring. Whatever it is I doubt it will be beige. 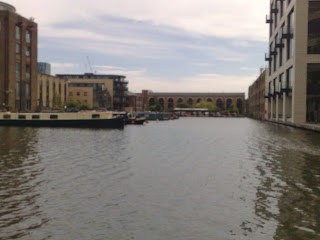 I have tried to walk all the way to Limehouse Basin in East London before but am always outsmarted by the towpath-free Islington tunnel. In order to reconnect with the Eastern portal you need to climb back up to road level and follow the signs. There are about two before all mention of the canal vanishes, or so I could see. This time I was determined and after clumping around for half an hour whilst using the rather poor quality sat nav in my mobile phon, I eventually found the other end. With renewed vigour I set off East once more. I had gone about another mile when suddenly I think I must have changed pollens from grass to tree or something. A terrible tickly cough developed along with the odd comedy sneeze. I spluttered on for another mile and it stopped as quickly as it started. Whilst I was walking I was able to admire the graffiti. Never ever understood the reason why it was necessary to write unamusing slogans or "tag" a building. I wonder if someone who has sprayed some appalling racist slogans on a wall stands back and thinks "hmmm not exactly Banksy but it’s a start" I did see one item that made me laugh which read "I've done a tummy shame". You told me that it was a catchphrase used by the "Crack Fox" on The Mighty Boosh. Only seen it once so not got far enough into it to recognise the phrases. It helped start a thread on the show about banal graffiti which lasted for several days. There is plenty out there to choose from.

After a couple of hours and about 7 or 8 miles I found myself in Limehouse Basin where the canal meets the River Thames. Judging by the size of the yachts, no recession here. A good walk. Two small blisters and no weight loss. Hmm. It was fun though. 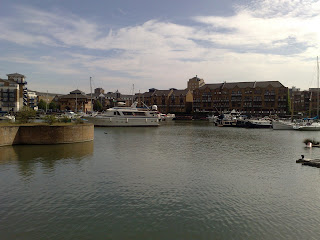 Monday night and it was back to the Royal Albert Hall for a must see :Nick Lowe. I have liked his stuff from his early days with Brinsley Schwartz to the present. He is a very engaging performer who managed to turn a place that size into a very intimate setting. Curtis Stigers turned up to play sax and Ron Sexsmith, the support, duetted on a Louvin Brothers song that I had not heard before which was excellent. He managed 4 or was it 5 encores and didn't do "I Love the Sound of Breaking Glass" which I wasn't fussed about. Normally when I get to see an act I really really like, they manage to avoid doing the one tune I desperately want them to do. The main set climaxed with a wonderful low key version of "What's so Funny (About Peace Love and Understanding) which is a particular favourite. It was taken at a slower tempo than the recorded version and was all the better for it. A chills down the spine moment. I was in good company even though for some unaccountable reason the show wasn't sold out. I spotted Mark Lamarr and Jo Brand in the audience as well as veteran producer/presenter Charlie Gillett and also BBC man about music Mark Hagan. 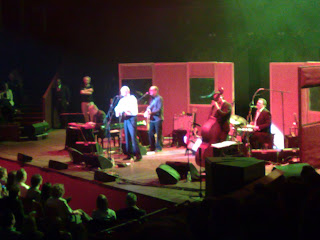 Getting enthusiastic about exercise? I think the world would end if you ever managed that task.
Just find something you like doing, not like you're trying to get good enough to do the marathon, carry on walking and sod the waist line.
matt

The only thing I've found that does the trick is faling in love. Of course if you then break up all the weight goes on again!

Avoiding the 'all you can eat' places with Libido boy might be a plan and sorry, but alcholol has to go - it's just wasted calories!

Having failed miserably at Blubberwatch due to inertia and lack of willpower….Question: "How do you increase willpower"? Answers please on the comment section. I would really appreciate that.

Oh ye of little faith! So you've lost no weight, big deal, on the plus side you've gained no weight.

Be happy with what you've got, keep up the walks to the nearest pub & stop fretting, life could take you down the road of being over fit and an early heart attack, you are designed to be what you are.

P.S. when are you coming up North? I reckon you owe me a pint for that free advice.

Unless I live in a time warp your clock is wrong, I might get up to listen to your show but no way would I be up to post around 9.30 in the morning.

Forget willpower, Dark Lord. What you need is (dramatic pause) an Incentive (holds finger in the air like mad professor making huge discovery,or like duck in toilet duck advert. I digress.)

Building on another listener's plan of using her car as a larder, we could tie a kebab to the back of a lorry and see how far it gets before you catch up. Exercise and kebab? Result!