Off to see Marianne Faithfull the other night for a special "session" for BBC Four, my favourite TV channel. It was in a lovely venue "St Lukes" and was, for me anyway, the height of sophistication: Round tables. Candles. Glass of wine. Plus some farmyard animal- shaped sweets my friend had brought. That and a packet of peanuts, and we were good to go! 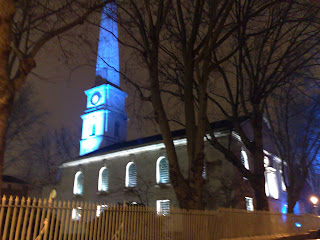 On she came and instantly had the audience in the palm of her hand due to her vulnerability. The voice which was pure and sweet originally has "matured" into a husky instrument due to years of well documented drug and alcohol abuse. It sometimes seemed little more than a croak. She was clearly nervous and seemed under- rehearsed with frequent stops to restart tunes and there were several retakes at the end. However, a really enjoyable evening. There seemed some confusion outside the venue as it seemed it was a hot ticket and so there was a bit of battle to get in with rather confused security arrangements.

Not sure when the concert will be shown but it will be worth watching for a number of reasons: 1) How the many stops and starts were cleverly edited into a seamless concert. We were asked to applaud a few times by the TV people. If they splice this in later will this regarded by the Daily Mail as another "BBC Faking it" scandal?

2) How the BBC copes with the strong language used not only in some of the introductions but also in the songs. "Why'd Ya do it" from the "Broken English" album being a case in point. I hope they don't cut it as it was one of the high points of the night.

3) To see if you can see me shovelling nuts and sweets down my gaping maw and beaming at the same time. She ended with "As Tears Go By" in its original form albeit with a totally different sounding voice from the 60's original.

Friday and it was time for another of our DJ "Nerd Nights". As you know if you are familiar with the show and this blog, every couple of months on average we hasten to a major British city to spoil it for the good citizens by being crashingly dull about radio and jingles and playout systems and the like.

Newcastle was the victim on this occasion. "Curated" by John “I met you in Binns Middlesbrough when I was 14 and got your autograph" Foster of BBC Tees and his partner Anna Lee of BBC Five Live. This meant choosing the bars and the restaurant. 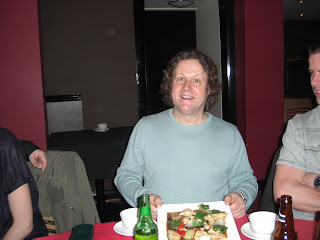 Newcastle is a hopping town and there was probably the best turnout we have ever had with Roger "IKEA FM" Clarke driving all the way from Berkshire to be with us. He reckoned a 650 mile round trip in total. It was good to see him as well as a host of new faces and some of the old stalwarts. Radio Two's Charles Nove made the trip and a nerd night is never a proper nerd night without Hirsty of Galaxy in Leeds. A great mate and the "Rain man" of these events. He can not only tell you the title and artist of a song but also the label it came out on and most damningly…the colour of the aforementioned label! This is a terrific party trick but also slightly disturbing. 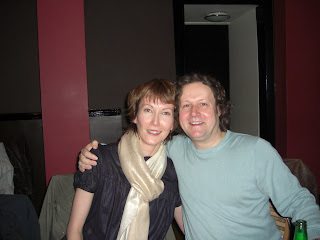 I decided to let the train take the strain which it did although as seems to be a hallmark of journeys that I undertake the "Quiet Carriage" was full of the noisiest passengers. This time it was a stag do on its way to Edinburgh. They had crates of beer and stood clutching themselves in the aisle and yelling at one another in between gusts of raucous laughter. My guess is that they would have all been naked and lighting farts by the time they hit the border. It may have been my imagination but I think I heard the train driver complaining that he wasn't able to hear the sound of the locomotive above the racket.

A great night was had and we stayed out until 3am. I remember everything up until when we left the bar. Not the short taxi ride to the hotel. Nor getting in to bed. I woke up with my finger still on the light switch.

Roll on April and the next one. This time we are heading back to London. Be warned - bores in a bar near you zzzzzzzzzzzz
Posted by Alex Lester at 18:48

Marianne Faithful has been a favourite of mine since forever. I have a number of her albums - can't seem to find any new ones these days. Can you help there ? The web can't. That's one gig you've been to that has made me want to be there. I'll be tuned into BBC4 when the time comes.