'IN PYJAMAS I CARRY NOTHING BUT SCARS FROM NORMANDY BEACH'

Decided that a little continental R & R was called for last weekend. ‘American Adventure Three’ is going to be too expensive, and it’s also rather undiplomatic and uncaring when the UK is in meltdown and people are battening down the hatches. This year I’m going to be spending more time at home for holidays and doing the odd weekend away.

With the awful weather I decided on a last minute trip to see some friends in rural Normandy. I phoned the ferry company and effectively said: "Usual 8.30 Portsmouth to Caen Friday morning and coming back Sunday afternoon at 4pm please." "Sorry not possible", came the reply. "We don’t run Friday morning crossings in the winter" Aeeeiiie! The joy of being so close to the coast is that it’s a quickish and relaxing hop across the Channel. There was only one thing for it - THE TUNNEL. 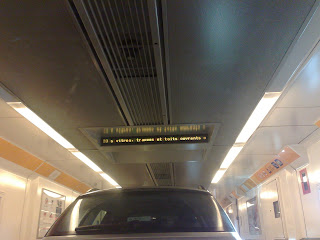 Not been by car this way, although I had a trip on Eurostar a few years back, which was very nice. Left a snowy London after the show and headed for the port at Folkestone. I arrived in plenty of time to find only a few cars there and some rather bewildering signs. I followed what I thought was the right route, and eventually ended up halted by some official looking guys. One asked the usual security questions and then rubbed the steering wheel with some gizmo which was supposed to show up any explosive residue. Just how accurate was this machine and what else would it show? “Hmmm we are picking up traces of cheese and onion crisps, dandruff and someone hasn't washed their hands after using the toilet have they sir?"

None of these applied to me so, after being given a clean bill of health, I was allowed to proceed onto the train. Like a car ferry they pack you in a long line, inches from the vehicle in front. The difference being that you remain in the car for the short hop under ‘La Manche’. Thought it was a good opportunity to have a doze. However the car in front kept switching its hazard warning flashers on and off, pausing…. then turning them on again. They’re pretty bright when they are only three feet away from your tired orbs. Eventually I could stand it no longer. I hauled myself out of the car strode to the vehicle in front and rapped on the window. "Are you aware that you hazards keep going on and off?" I barked. The driver and his wife smiled wanly and pointed to their child standing on the transmission tunnel pressing all the buttons on the dash. Resisting the temptation to yell "CONTROL YOUR CHILD", I merely muttered "Oh! It is beginning to give me a headache that’s all". Darkness reigned after that. Not being a parent, I’m not sure at what point parents decide in the law of diminishing behavioural returns, it’s better to let their children run riot and disturb others, rather than have them sulk or worse stifle their creativity and freedom of expression.

Out the other end and off I went with the Sat-Nav telling me it was 280 miles to my destination. It was only a few kilometres down the motorway when I realised that no one had asked to see my passport.

Most of the roads were toll roads or ‘Peages’ and included in the drive was a trip over the impressive ‘Pont de Normandie’, which crosses the Seine near Le Havre. This added £25 to the bill. The roads were pretty clear and speedy progress was made. So it only took me about three and a half hours to reach the house. However it would probably be a good idea if you are alone in a right hand drive car to manufacture a comedy long arm to hand the money over at the toll booth. Instead I had to get out walk round the car hand over the cash walk back round and get back in and head off. Not quite a ‘Le Mans’ start, but I could do with all the exercise I can get at the moment. 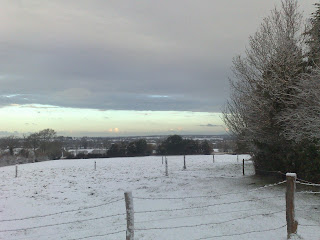 Arrived at the house just in time for the central heating oil to run out. However the water wasn't affected and there was plenty of wood for the stove. Bottle of wine and some really terrible DVD's – ‘Galaxina’ anyone? Luvverly. Woke up to find I was snowed in. Nothing for it, more terrible DVD's, ‘Hunk’ anyone? Wood burning stove, wine, DVD's, bread and pate and an electric blanket what more can a boy ask for? 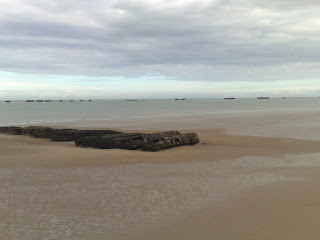 By Sunday morning most of the snow had gone, so was able to set off for the ferry port at Ouistreham. I decided to have a nice dawdle, so I headed for Arromanches and the D-Day landing beaches - hence the title of this week’s blog. Taken from ‘Big Show’, it’s a song by the wonderfully underrated Bonzo dog doodah band. When I arrived I was immediately transported back 40 years as a party of British teenagers were goofing about and not taking much notice of their surroundings and their place in history – just as I had done on my school trip back in 1969. Maybe it’s only with age that one gets to appreciate the sacrifice made on our behalf all those years ago. I wasn't annoyed as I could see myself in the kids and so am confident that they too will come to understand as they mature. Onto the ferry and parked up behind a muddy estate car. Out hopped Paul Heiney, formerly of ‘That’s Life’, and his wife Radio 4 stalwart and journalist Libby Purvis. As you pointed out on the show - I should have given them my autograph.
Posted by Alex Lester at 23:22

Rather dodgy DVD collection your friends have!

Oh definitely 'Vive La France' for the relaxing side of things. Wot no radio to tune in to, then? No style a la France, ou est le Le Lord du nocturne? (nuit or demi-nuit if you are a pedant)
BTW do you speak French?!! ~ CW

THE WAY I SEE IT IS THIS,EVEN BAGPUSS (WHEN HE'S ASLEEP)IS JUST A SAGGY OLD CLOTH CAT, SO ON THAT BASIS ,..TOP SHOW! OH AND WHY IS YOUR NAME IN TEENY TINY LETTERS IN T'RADIO TIMES? WHATS ALL THAT ABOUT..