THE BOYS ARE BACK IN TOWN

Gig season is upon us once again and so for the first time in 2009 my mate Simon aka "Libido Boy" blew into London. I always make out that my old school chum is as "shagadelic" as Austin Powers but it is only in jest. He is a tryer though so he finds his mind wanders when women walk past. He arrived with a brace of new charity shop shirts and a glint in his eye. Not sure what he had been up to the previous 24 hours but I expected he was up for some loud music and then a visit to one of our favourite pubs for the silent DJ and his wheels of steel.

This time he brought a towel rather than use mine and this coupled with his sleeping bag in my tiny flat, he did think it was a bit like we were moving in together. Think "The Odd Couple" and you are getting close. Although not sure which one of us is the prissy Jack Lemon character. I have a nasty feeling it is me as I fuss around tidying before he arrives vacuuming my moultings from the bathroom floor. Cleaning the khazi and generally straightening stuff so that he can leave the toilet seat up. He does this as he knows how it bugs me. My view is that it is such a tiny bathroom if you turn round quickly you will dislodge something and straight down the loo it will go. There are few things more annoying than fishing a soaking roll of "bathroom stationary" out of the pan.

Friday night’s destination was the Shepherds Bush Empire for the last date of the tour by those punk stalwarts "The Buzzcocks". Not seen them before although I have played them many times on the show. Support were the Lurkers who are down to one original member I think. 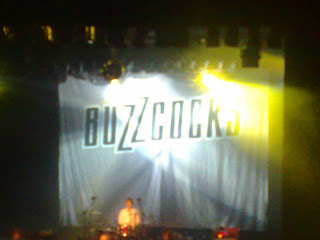 It was going to be interesting to see/hear how punk had held up these last 30 years or so. The audience seemed to be comprised of middle aged mothers and their children where we were sitting in the balcony. (it’s the knees, you know). Down in the pit middle aged and young men were ready to pogo like it was 1979. The moment the Lurkers hit the stage beer started flying and the dancing started. Gently at first but by the time the Buzzcocks were in full flight it was bedlam down there. Meanwhile up in the gods the middle aged Mums and their daughters were up and jiving blocking the view for Libido Boy and me who were still sitting down. (It’s the knees you know).

It was pretty relentless stuff although hugely entertaining. Not entirely sure that the politics and teen anger had fared so well. It must be hard to sing "16" when you are knocking 50. It was pretty exciting stuff although you had a pretty good idea of the tempo of the next song....usually the same as the one that preceded it. I noticed however that although I was tapping my feet Libido boy was not moving. Had he died of excitement? No, he had fallen asleep!

After the gig it was off to our favourite boozer in Camden for a few pints, crisps and the silent DJ and his wheels of steel. There then started a conversation about which version of "Do you love me" he was playing. Dave Clark 5, Brian Poole and the Tremeloes or the Contours. We thought we would ask the silent DJ and his wheels of steel. When he finished his set he packed all his vinyl back into a couple of holdalls and swept into the night before we had a chance to utter a word.

Hamburger heaven followed as we went to one of the many concession stand,s then we walked back to the flat. When we got back the hall porter was joshing with some women. So as we waited for the lift we joined the josh. One of the women was eyeing me with some amusement. "She fancies me" I thought. When I got into the lift and looked in the mirror I realised what she was actually staring at: I had huge globule of tomato ketchup on my chin.

Weather caved in and we had snow in London and the South East over the weekend. This was enough to make all the news outlets go into a collective meltdown, conveniently forgetting as ever that there were plenty of parts of the UK that hadn't seen a flake. So instead of going with the flow we decided not to. We have always enjoyed a little light subversion on the programme so thought it would be more fun to enjoy the idea of it than go into "crisis" mode. You can get that any time on your local station as that is what they do well reading out the long list of the school closures with small children hoping theirs is going to be shut. Like waiting for their lottery numbers to come up. As older boys try and make hoax calls to get a bogus closure mentioned. I think they are wise to this by now so there are a lot of "codes" in place. Just what the BBC needs right now is for there to be "BBC Bogus School closure Gate". 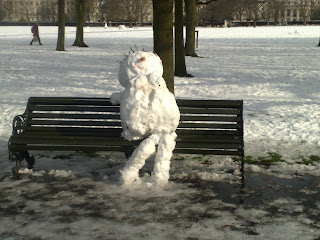 On the Monday I went against meteorological advice. Got a train to Birmingham to see my Dad. Delayed ten minutes either end but otherwise fine. Plenty of snow. Buses working fine. Bonus as I walked along, I saw a temporary street sign for a new estate. It must be difficult to try and think of new themes for estates once you have run out of flowers’ names and local worthies to name cul- de-sacs after. I think judging by the house numbers in Merton Way they are going for a Radio 2 themed estate. "Wogan Way" anyone? 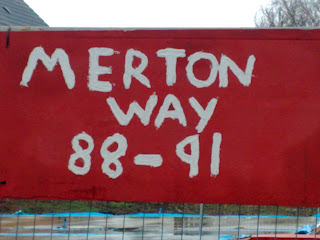 Crumbs, you were lucky to get a train! I thought all public transport was cancelled - it was here in Hove (actually)!

Hope you can see results from the new diet and exercise regime soon dear Dark Lard!

From my days in localradioworld, I seem to remember asking for the school's official Department for Education number when taking a "closed" phone call.

Also, you can generally tell a school secretary from a fourth-former.