Hmmmm, so much for the roaring success of Blubberwatch. Since I went back on the diet I lost 2lbs last week, and this week? Nowt! I think my scales may be stuck at just over 12 and a half stone. It’s a bit like the film "SPEED", I suppose. If for some reason the scales dip below a certain weight somebody or something will explode. I am going to have to start calorie counting rather than guessing that the sandwiches weren't that fatty.

A friend came for the weekend so I decided to show her my town. Hastings. This involved a six mile walk on the Saturday. Along the sea front in the bracing winter air and back through the park. We headed down the Old town where I used to live. 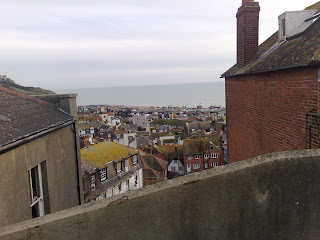 When I was a child it was full of pokey junk shops where I would spend hours rifling through trays of old and foreign coins, gingerly moving from area to area in case I accidently brushed against something and there was a rumble and a crash and several hundred years worth of accumulated curios and bric-a-brac would come roaring through the shop like a Tsunami of old stuff. The bill for the damage back then would have run into at least sixpence.

I lived in that part of the town for ten years and loved it although change did come albeit slowly and with it a gradual realisation that it was turning into a bit of a theme park. So I moved further up the seafront ten years ago. It always good for a visit though, with a good variety of shops pubs and restaurants. However there is only one shop that can truly be called a junk shop which is in the High St. I have bought odd bits from there for a few pence over the years. What amazes me is that whenever I go past the stock seems exactly the same. I wonder if you own a shop like that you regard the stock as "friends" and so you can't bear to let it go. I think antiquarian book shop owners probably feel the same. This is not an exact science but in my albeit limited experience if you see a book in the window of a shop that you would like. The store is shut with a sign in the window saying; "If closed phone *****" which of course you never do. Although on one occasion I did find a shop open with a book that I liked the look of. So I am the proud owner of "It’s Trad Dad", a tome by Brian Matthew from the early 60's. The shop owner did look a bit mournful I thought when I exited.

We walked on the beach looking at the fishing boats and visited to the Fishermans Museum home to the "Hastings Lugger" and old sailing boat and also the charity the "Winkle Club" of which I am a very proud member. It is a while since I have been and was delighted to find a picture of my Grandparents taking part in a parade. My Granddad Norman Lester was Town Clerk. His name was plastered all over municipal signboards. Including ones in the reservoirs and ponds in Alexandra Park which declared: "No fishing or Swimming by order N.P Lester Town Clerk". He used to tell us kids that at night when we were asleep he would row out with these signs that he had painted himself in his shed. We of course believed him. I am the proud owner of a sign from some now long demolished tennis court changing rooms which trumpets "Belongings in these lockers are left at owners risk" N.P Lester Town Clerk. I have it up in the hallway at home.

After walking through Hastings and back home via Alexandra Park we felt it was time to examine and consume our purchase. The Old town has an excellent fish market and so all day we walked around sharing the crab carrying duties.

As a bloke out to impress I have a couple of "signature dishes", one of them is dressed crab. I lived in the tiny fishing village called Staithes up near Whitby during the mid 80's and was taught by Edna who was the landlady of the sea front pub "The Cod and Lobster" how to dress crab and remove the "dead men's fingers" the gills which folklore tells us are slightly poisonous however I think they are just nasty tasting so it is not quite so daring as preparing a Japanese Blowfish for instance.

I should have checked a little more carefully. When I prised the shell open there was precious little meat inside I think the crab had just shed its shell for a bigger one. Crabs obviously don't worry about dieting. For them it’s all about bulking up. They don't have bigger and smaller or even "target" shells in their wardrobe. "After Xmas I am going to drop a shell size. I am going to have to cut out the carrion". Still, it was a tasty snack and can't have been responsible for the lack of weight loss this week. Crab 1 Alex 0. 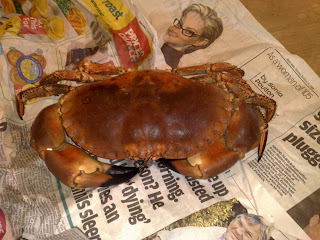 Then we went off to the Marina Fountain in St Leonards for a few drinks and a live band. The pub knows its market pretty well so it often has rock and metal covers bands on. I think I must have heard "Whole Lotta Rosie" performed to a variety of standards by about five or six different groups over the years. Friends of mine who go regularly can tell the difference. I am spoiled with my job being in the privileged position of getting to see the finest original live acts so sometimes I forget and apply professional standards to what are enthusiastic semi-pro players. However one thing does bug me. I still can't see why you need to mic up a drum kit in a pub. I have banged on about this before (ho ho). It makes the band unnecessarily loud and conversation impossible. In the old days before the smoking ban at least the press of people would soak up some of the volume but these days half the customers are outside at any one time.

On this occasion it was skiffle night with Hobo Jones. A trio of blokes dressed as tramps pretending to be Lonnie Donegan. They went down pretty well despite doing "The Rock Island Line", a song I loathe.

Not had a good walk round town for ages so it was good to get back in touch with where I live and see some of the changes that have occurred and how the park has grown back after an extensive and expensive refurb a few year back. Now if only someone would come up with the money to get the pier back open as it has been shut for a while due to it being declared unsafe. If you have a few million to spare, come to Hastings - its lovely.
Posted by Alex Lester at 08:18

And there was me thinking that my ex left London for Hastings (St. Lenards) because we became ex's. I now know our beauty could not compare.
:-)

A week is too long between posts, Dark Lord - when will we be able to follow you on Twitter ?

I hope the dressed crab impressed!

Oh -I remember Hastings ! I lived in neighbouring Brighton for a while once upon a time. There are funny little structures on the beach where they do smoking (no -of fish!) I recall - like tall doll-houses. Maybe they've gone now, like a lot of the world's other old curiosities.

That 6-mile walk should have used up a good few calories....we shall expect better news of b-watch next time!