Well I hope so. This is the first week of the whole new me. As opposed to last years "whole new me". "Blubberwatch" is back. Not missing the beer during the week and have found that I have more time on my hands to eat. Err no that is not what I meant. Sitting drinking beer and reading the paper has been replaced by visits to the gym and then going home and reading the paper with a couple of sandwiches and a smoothie. This is the way forward although I have yet to see any benefit. Reading in the paper of a new diet pill for the overweight. However it isn't on the market yet here and it does smack of cheating. Plus as I confidently tell myself, I am overweight not obese. Watch this wobbling space. 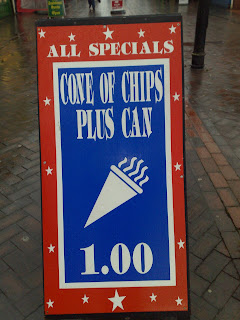 The gym has been interesting in that I have been twice and spent on average half an hour on exercise bikes and treadmills watching my heart rate rise until I am sweaty, breathing hard but not spots before the eyes and falling to the ground in a dead faint.

There are a number of people who seem intent on killing themselves by too much exercise, blowing like whales and flicking perspiration everywhere. I part company with them at this point as I can’t see the fun in it. As I outlined on the show this week, half an hour on the treadmill watching "Deal or no Deal" can be a mite dispiriting so that I asked you for other diversionary tactics or better still more appropriate TV shows to watch whilst I was exercising.

In a nutshell to précis the results (and this is not a scientific survey) : The general consensus was to watch women's bottoms. If I do this my time at the gym I expect will be short.

It has been a week of music. Saturday Libido boy and myself trogged along to the legendary Abbey Road Studios to see a Radio 2 special featuring ELBOW and the BBC Concert Orchestra. Amazing evening and then off to the pub, yaaaay! Found a quiet pub. Well it was quiet because there were hardly any people in. The reason became apparent just as we sat down. Excruciating karaoke by a selection of drunks in cowboy outfits. Sally Traffic to the rescue as she phoned to say we should meet at a nice little boozer she knew not far from the BBC. We grabbed a cab and arrived to see a distinctly drenched Sal standing outside a closed and darkened boozer in the pouring rain. A brisk squelch and we found another so the evening wasn't entirely alcohol free. Still, the experience was good for heart, liver and soul.

Sunday and Libido boy wanted to visit a charity shop to buy some more shirts as last time he came to visit he left his bag on the train and lost everything. This is where things got weird. For some reason that doctors can't fathom he lost his sense of smell. So I was his "proxy nose" and had to sniff the armpits of the shirts and a jacket he was thinking of buying to check they were clean. Now I know how dogs feel. I am a fully trained B.O. and fabric conditioner mutt so if there is a catastrophe somewhere in the world I can quickly be flown in to find clean and not so clean people buried in the rubble!

Tuesday lunchtime and it was to a "showcase". Record companies arrange these from time to time so we can check out new artists. I find this useful for "Lester's Library" as it is always nice to hear new people. Judith Owen is a singer songwriter who has an album called "Mopping up Karma" out. She sings nicely and plays the piano. However I wasn't struck by the material.

What intrigued me though was that she was given to very lengthy explanations of each tune before she performed them. I was trying to think where I had heard this technique before then it occurred to me. Have you ever seen the film "A Mighty Wind"? It was by the "Spinal Tap" people and was concerned with the US Folk boom. In it there is a group called "The Folks Men" and the character played by Harry Shearer - who these days is perhaps better known as one of the voices on "The Simpsons" - is given to long and tedious and extremely serious and involved introductions to their material. Life imitating art? Harry Shearer is married to Judith Owen! 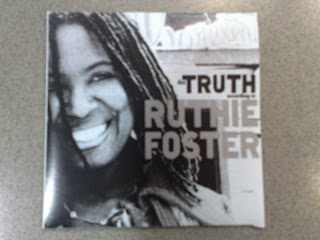 That evening and it was down to a small club with a TV announcer friend to see Ruthie Foster, who sings blues, gospel, reggae, you name it. She was fantastic. I have featured her a couple of times on the show. She encored with a Bob Marley medley that nearly took the roof off. Prior to that she had performed a stunning version of one of my all time favourite songs "People Get Ready".

The venue was a basement with little or no seating, so we had to stand. Trish was wearing the wrong shoes and so she was in such agony that she had to leave after a couple of numbers leaving me to enjoy the rest of the gig. However she didn't depart without reminding me of an event when we were announcers together on BSB in the early nineties. (They were the satellite company with the "squarials", you may recall). Just before BSB "merged" with SKY and we were all fired, a new announcer joined us on the team…..Rob Brydon. For some reason I don’t remember him at all. I would doubt he remembers me either. 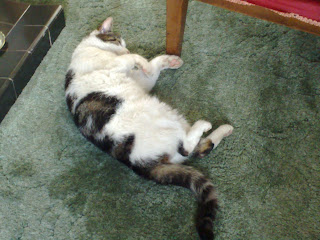 All in all a great week and there is more music to come next week too. We also discussed on the show exactly how intelligent animals were. Compared to Einstein- not very - was the conclusion. This is now the perfect excuse to leave you with a picture of my Dad's cat, Jersey.
Posted by Alex Lester at 16:52

What a cute cat!

Who says they are not intelligent? - sleeping 20 hours a day, not going out in the cold, turning their noses up when the food doesn't suit, snuggling up to a warm human when they feel like it - sounds pretty clever to me!