As expected, the weekend in France has reversed the ‘Blubberwatch’ process, but fortunately not by much. So an extra pound has been added as a result of Norman dairy products. However I survived the out of date fish soup. Salty but nice!

It’s been a busy and extremely fun week. Went out with a few friends and colleagues from work with singer/songwriter Nell Brydon who I’ve featured on the show a couple of times as part of ‘Lester’s library’. Lunch lasted quite a long time, not due to enormous amounts of food and wine but the conversation was just flowing easily. We also discovered a lot of things about each other. One was that everybody had a cracking story to tell. There are few things I like better than to sit and ‘yarn’. We also realised that as a young New Yorker who is due to tour here fairly extensively, Nell didn't have enough vocabulary to deal with potential hecklers. By the time we finished with the poor woman she had an arsenal of profanity that would shock Russell Brand! Nell’s currently in Iraq entertaining the troops with a new band as her old one were too timid to go! So time was spent trying to think of a name for her new group as well as names for the old one. She seemed such a nice young gel before we corrupted her.

After the meal we were having such a good time that we drifted off to a pub in London's Soho where we continued with the talking. Odd place I thought with a ‘unisex’ loo. I followed a woman into a cubicle to discover she had, er left the seat up. “Thanks", she said to me in a gravelly voice, as I let her pass.

Due to ‘hit album’, I’ve been asked by the ‘TOGS’ to provide a picture for the sleeve. So Andy the producer and myself, racked our brains as to what we could do that would be fun and distinctive. We then thought if we recreated a 60's type cover that would be fun, as ‘My Brother’ came from that era. We obviously had to have one of those ‘happy wacky zany madcap jumping in the air’ shots that were so popular at the time. With the aid of my digital camera and an empty office at about 06.15 we had a go. However, we failed miserably. I wasn't able to launch myself into the air sufficiently high enough and, due to hand/eye coordination problems as well as shutter lag, I was either a blur, still on the ground, or my head was missing! So to ‘Plan B’: The other ‘happy wacky zany madcap LP cover photo' - the ‘crazy up a lamppost’ shot. 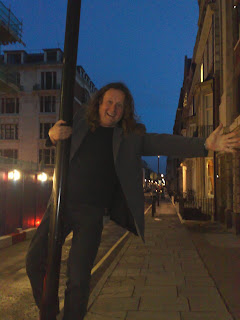 On Friday night, Libido Boy came to stay once again as he had a hot date on Sunday night, plus he wanted to plunder my record collection. We went off to see Southside Johnny and the Asbury Jukes who were excellent. They hit the stage running with minimal chat and they played for two and a half hours. They’re a great band not only showcasing some tunes off the new album that Johnny had made of Tom Waits covers but they also played some of their own stuff. As they were in the UK they also played some Beatles song as well. 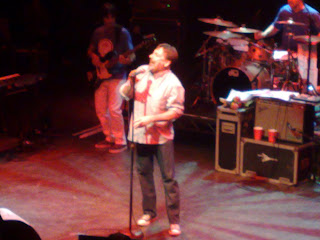 I have to say they were the shabbiest looking band that I’ve seen for a long time. It looked to me like they’d collectively stripped a charity shop and had been clothes sharing every since. It didn't detract from a terrific gig however.

After they finished we went to Camden to that pub I mentioned in a previous blog where they have a man on his wheels of steel. It was busier than our previous visit and there seemed to be more young women done up to the nines in achingly fashionable retro outfits. I had to keep reminding ‘L’ boy that we were their Dad's. We walked back to the flat and in the morning we set off to Hastings and my record collection. This was a rather protracted exercise as we decided to go by car. Due to an accident we undertook a lengthy detour of the backstreets of Catford until we eventually found ourselves back on the route…..and behind the same car that was in front of us before we set of on our Sat-Nav led excursion.

We spent the afternoon in the spare bedroom playing scores of CD's and then went off to the pub to meet some other friends and watch a covers band. I’ve been accused of being dismissive, with some justification, about pub bands. They are pub bands and it’s free to get in. So if you get a leaden version of ‘Whole Lotta Rosie’ time and again, does it matter? Probably not. However, in a small venue, equipment can't replace ability. As musical gear has become more sophisticated and cheaper over the years, amateur bands feel the need to add lights and larger than necessary PA systems. Guys it is a pub you don't need to mic the drums! We stood on the beach in the howling wind and watched the waves for a while before eventually going to bed at about 2am.

In the morning I took a cup of tea up to ‘L’ Boy to find him in his underwear in the spare room surrounded by yet more CD's. Seemed he’d been there for much of the night. Not spoken to him since, so I don't know how well his date went. I expect badly. He probably fell asleep midway through the meal, having had about eight hours sleep over two days. Still, knowing him he will bounce back!

Mr Lester!!! stray apostrophes lad. Now it is no good saying you haven't been able to get an update from the 'l' boy - we need to know how it went; did she see through his 'charm'? It really isn't good enough!

weight cannot be too bad,as lampost did not bend.