SO MUCH MUSIC, SO LITTLE TIME

After a frankly disappointing ‘Blubberwatch Wacky Weigh-In’ on Thursday morning at 10.30 am, (This is when I appear to be at my lightest), I have only lost a few more ounces. I think drastic action is called for as this plateau is getting annoying. I’m going to have to check out the gym to ‘up’ my calorie burn-rate to see if that helps.

Friday evening, I went down to the Mermaid Theatre in London to catch Glen Campbell who was doing a special gig for Radio 2 as part of "Friday Night is Music Night". His voice was a mite shaky at the start, but his guitar playing was spot on and he soon warmed up. Although after the first few songs he said the same thing each time: "Glad to be here but at my age it is good to be anywhere.” This gag outstayed its welcome after a while.

It reminded me of a terrible train journey from Hastings to London a few years back, which suffered terrible delays, and at each stop the conductor/guard preceded each announcement with the sound of the toilet flushing and said: "Sorry to announce that this service has really gone down the pan". By the time we reached Waterloo East we were ready to flush him headfirst.

Once Glen had got onto more familiar ground with a selection of his hits such as “By the time I get to Phoenix”, "Wichita Lineman", and a wonderful version of my favourite Glen Campbell tune although originally written by Alan Toussaint, "Southern Nights", he was really on the money..superb.

I tried to count the number of musicians on the stage but, by the time I had nearly finished counting, some more would arrive or some would leave. I checked with the producer - Al Booth, after the show and she said the BBC Concert orchestra, along with Glen's band, fielded 56 instrumentalists and singers. I didn't ask her if, as producer, she had to buy the drinks after. If so, that was going to be one expensive round. I did buy her a pint which she thoroughly deserved. From my limited experience with orchestras and musicians you need a whip and a chair to keep them all in the same place, let alone playing the same tune. The results you can judge for yourself on BBC Radio 2, Friday 14th November at 7.30pm

Paul Gambaccini did the introductions. Whenever I meet him I always feel like he has my brain in a vice and is squeezing it like a sponge. He just knows so much. He did a faultless, seemingly off-the-cuff introduction, entirely from memory which was packed with facts and trivia about Glen, the BBC Concert Orchestra and he still even remembered to tell the audience to switch their mobiles off. He’s a nice guy as well. I think I’m suffering from ‘IQ envy’.

Saturday up early and on the train to Hastings to take part in ‘Hastings Week’. This is a lot of fun with loads of events and my small contribution was to judge the ‘Classic Car Show’ in the Old Town. As usual a dazzling array of old cars polished to a higher standard than when they were new. Proud owners stood and beamed, presumably worried about sticky fingered members of the public like me. One sadness was that, rather like the toys you had as a kid, the shifting timeline of "My Dad has a car like that", is now turning into "I had a car like that". No wonder my Teddy Bear looks like it belongs in a museum. Hardly any fur and blind. Although for reasons I am not entirely sure - as they are lost in the mists of time….wearing a dress! 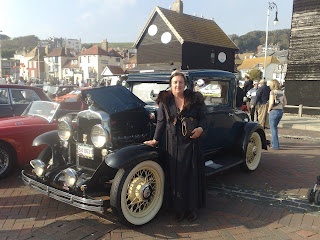 The award went to Pauline Preston and her 1930 Chevrolet. She was living the part dressed in period clothes including a dead fox stole. On the back seat was an old U.S Newspaper reporting the ‘Wall Street Crash’, which seemed remarkably prescient.

Then back on the train in time to meet Libido Boy, who was on his way down from the Midlands, for a Saturday night gig at the Royal Festival Hall on the South Bank of the Thames. This was going to be a tribute to Nico the German singer and songwriter who died twenty years ago. She’d been part of The Velvet Underground and Andy Warhol’s clique of "Superstars" – all of whom were famous for fifteen minutes. However, her fame, lasted a good deal longer. The tribute was curated by fellow ‘Velvet’ member John Cale.

It was an intense, dark and brooding evening. A host of singers and musicians appeared -some I recognised, most I didn't. John Cale tick, Peter Murphy - former lead singer with Bauhaus tick, James Dean Bradfield from the Manic Street Preachers tick - erm is that a Guillemot? A lot more came and went. LB nudged me in the ribs and said: "I don't recognise any of these songs". He was the big Nico fan. It was strange and thrilling all at the same time. I’ve never been to a concert like it. Everything had a dark motif as befits the music but no-one was introduced. 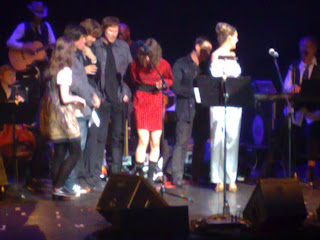 After the interval when the drinks had kicked in, the same artists came out for ‘round two’. This time the audience started shouting; "Who are you?" when performers took the stage. Suddenly it was over, and they were gone. We both enjoyed it as it was unlike anything we had witnessed before and it’s nice to go and hear things that you’re not familiar with as it broadens the mind.

It was then time to hit the town. We ended up in Camden once again, where the bars stay open late. It’s always exciting with scores of people milling around obviously having a good time and there’s a strong ‘police presence’ so we never feel threatened by the throng. We had a drink in one pub where we noticed that we were the oldest people there and we then saw a rather nice look place that wasn't too crowded. The doorman stopped us and said: "Its £4 to come in". "What do we get for that?" we asked. "We stay open ‘til 3am and we are a gay bar" he offered. Two smallish slightly camp middle aged men looked at each other, (us), and decided against, just as two spectacularly beautiful women waltzed in. "But but…..the er….oh erm its not exclusively er.. blokes is it the notion of er… gay". We slunk off into the night two straw-chewing, unsophisticated, provincial hicks.
Posted by Alex Lester at 00:23

We went to see Glen at the Festival Hall last night, and whilst the musicianship and the voice were top-hole, it was clear that there are a few memory-loss issues going on there, bless him. It made the love in the room that bit more intense, I think.