Not sure where the time goes these days. It’s often said that as you get older the time appears to speed up. At the current rate of progress I will be retired by next week. The week after I will be examining walk-in bath commercials with interest, and a couple of days later will be seen smiling gummily in my bath chair, as the telegram from King Charles is read. Not wild about the following week however.

Last week sped by in a whirl of cups of coffee with friends and relatives. I went up to Birmingham on Monday after the show to see my Dad. He’s a man obsessed with getting the most out of life, which is terrific. However, it does mean that you have to book an appointment to see him as he may be out walking the hills, researching something in the library or looking through his microscope at "slime mould". Failing that he’s usually making something in the garage.

My sister and brother-in-law were there too and they kindly gave me a lift back to the railway station. We passed the ‘Mailbox’ where I used to be based until the show returned to London in April, and I noticed a small crowd. As they dropped me off, I had a couple of minutes before my train, so sauntered over to have a look. 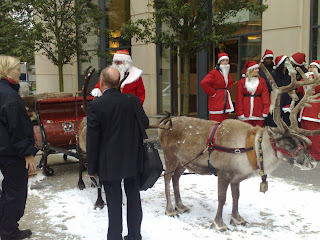 September - and there was ‘Santa’; his sleigh, fake snow and some "little helpers". No idea what they were there for although for some reason it plunged me into slight sense of gloom as I am not a big fan of Xmas. By the time the 25th of December arrives, everyone is fed up with it because it starts earlier each year. I mentioned this to one of the onlookers and said, "Does this annoy you slightly?" He agreed. I mentioned it on the show the following day and you pointed out it was a publicity push for a Children’s Hospice. Oops!

Later in the week it was time to record a track for "My" hit album. I’ve been viewing this moment with some trepidation, rather like a condemned man the night before trying to enjoy his final meal and hoping there would be a visit from the Warden. I had rashly agreed to do this several months earlier and had hoped it had been forgotten. No such luck. A backing track had been sent to me and the lyrics. As such, I didn't get much sleep after the show as I was up with the lark, rehearsing and hoping the neighbours wouldn't hear. It took several go's until I nailed it, then I wasn't able to do it at all after that.

Lunchtime Wednesday and it was into the studio to er "lay down some tracks". Half an hour later and I was with one bound - free! The whirring sound I heard was undoubtedly poor old Terry Scott spinning in his grave. So stand by for a rousing rendition of "My Brother" on the new Children in Need charity CD that Terry Wogan’s ‘TOGS’ have put together. I gather there are some proper singers on the CD such as Aled Jones and Clare Teal, so your money won't be wasted.

Friday morning after the show I zipped down to Portsmouth and headed off to France for the weekend. This was a wise move in many ways, but not in others. I go there regularly despite the fact that my French is still pretty poor. I have friends over there, and it’s always good to see them. Edith I’ve known for nearly 20 years and she speaks no English and, with my halting schoolboy French, it can be slow going, if not downright baffling at times. If we’re having a meal, she leaves the telly on so that dubbed versions of ‘Murder She Wrote’ and ‘Diagnosis Murder’ can help fill any awkward gaps as I try and digest the last breakneck flurry of ‘foreign’. Meanwhile Edith mulls over what it was that I said, and then tries to figure out what I actually meant.

The downside is the hospitality. Well it would be churlish to refuse. Edith makes food out of anything that moves, some things that don't move quickly enough, and stuff that doesn't move at all. I often find her with a bucket picking large snails off the back of shed doors. As it is Normandy there’s a lot of apple and dairy based foods.

‘Blubberwatch’ regulars can see this as an elaborate excuse in the making. Every Thursday it’s wacky weigh-in day around about 10.30 in the morning as I find that this is the optimum moment when, for some reason, I appear at my lightest. Last week by a certain amount of moving around on the scales, I managed at last to find "the sweet spot" where I was least heavy, and I noted another pound had disappeared from my girth. I’m typing this on a Wednesday and I have a sneaking suspicion that the pound may have returned. The depressing evidence will present itself on 2nd October. However I consider myself ‘work in progress’ and I refuse to be disheartened. I’ll have to redouble my efforts and maybe join a gym to ‘up the amount’ of calories burned and not get complacent with my food and beverage intake after an easy first stone of loss. 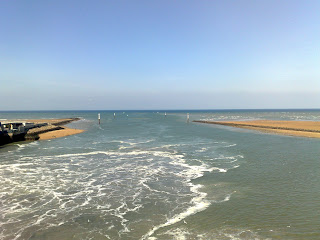 I took the ferry back on Sunday afternoon and arrived in Portsmouth at 10.15pm. This gave me plenty of time for a drive up to London, an hour lying on the bed before going in to the BBC to do the show. I usually get a cabin so I can have a snooze during the crossing. However, on this occasion, someone had decided to play a computer game in an adjacent cabin. This meant that for 6 hours all I could hear through the wall was: ‘beep bop…bop beep beep beepety bop beep’. Not a lot of snoozing was done hence I felt a bit weird when I arrived at the studio.

Richard Allinson who’s sitting in for Sarah Kennedy, exacted a terrible revenge when I remarked on his shirt - saying that the show sounded the same as ever despite me having no sleep. And as for the "sweet spot" on the scales, didn't I mean the floor? Curse that man. He’s not overweight either. Don't you come flaunting your thinness at me, slender-boy!!

It will soon be the weekend and, well, swipe me if there isn't another gig to go to. This will doubtless get a mention along with the fish soup which suddenly came to my notice on the 29th of September, as that was its consume- by date. That’s if I am spared. Out of date fish soup can be a killer!
Posted by Alex Lester at 16:24

Surely Charlie will have popped his clogs by then and it will be King William at the helm, if we still HAVE a Royal Family of course.

Sadly I work during the day so only catch bits of the show during wakeful moments (it's very helpful when I want to drift off back to sleep!) but I never miss your blogs, which are a hoot.

Must say the music you play is also the best on the Beeb ...

Until now I've been a 'day person - recording the show overnight then listening to it during the day as often as the boss will let me get away with. Recently the other half has got a job a long commute away which means 0540 starts, so I'm now a true 'halfling' catching the tail end of your show live while trying to wake up!

You did an unsung hero feature one morning around 0550 - it is most surreal to be half asleep while you are reading out a ranting letter from the paper while the "bed" of chicken and dog sounds plays in the background.

Have to echo the comments of sallyb - best music on Radio 2, and although I am in deep slumber while you're live, I listen later in the day as often as I can and always read the blog entries (I even post a comment occasionally too!).

Take it easy - and thanks for helping me get through the day :)
Paul

heheh the dairy got you - all that food swimming in butter, cream and cheese no doubt. We await the blubberwatch weigh in update with baited breath - book yourself in for a seaweed wrap or something oh-getting-on-in-years one!