In the throws of an enormous gig going at the moment, with a couple more to report on. I’m writing this blog more than a week after the event as so much has been happening that it’s difficult to keep up.

Friday 17th and it was off to see Walter Trout, whose a terrific blues/rock guitar player having been with John Mayall's 'Bluesbreakers’ and John Lee Hooker in his time, before embarking on a solo career. 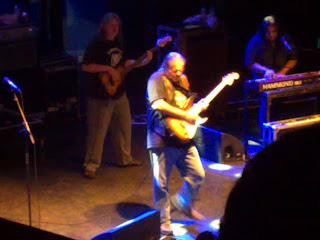 You know what you’re going to get with a ‘Trout Gig’. A lot - and I mean a LOT, of guitar. If you don't like solo's don't go. His tour t-shirts read on the back "Too many notes…too loud!" Because the whole event is based around his guitar playing you get the distinct impression that the whole set-list is made up on the hoof. We were sitting up to the left of the stage on the balcony so had a great view. However perhaps it’s an age thing, but we were a bit close to the PA so my left ear was whistling after the event, which needed some firm action before the following night. I shall detail this in a moment. Walter is so at home with his instrument he is able to make it "talk". So, for the first time in my life as far as I can recall, a musical instrument has told me to "F%*&" off!"

Betcha can't guess where we went after the show….yup up to Camden and into the pub. Libido boy is on a health kick so he decided he was concerned about his drinking and particularly about the amount of crisps he was eating. He’s never been a smoker so his vice has always been salty snacks. So how was his willpower? "I'll just have a half" he announced when we arrived. Upon seeing the crowd at the bar he changed his order; "better make it a pint as it may take time to get another"………."oh and I think I'd better have a packet of crisps". So much for that iron will.

We found a seat and shortly after a couple of Spanish women and their boyfriends sat down next to us. I could see he was torn. It’s a compulsion.I could see him glancing and knew it was only a matter of time.

It’s not that he wanted to take them home or anything particularly, as they were obviously attached. He just likes talking to woman. Nor, should I add, in any particularly lascivious way. I think it’s similar to his desire for crisps – it’s a habit he’s got into.

Suddenly he snapped and launched into a tirade of slightly halting, but still pretty impressive to my ears…Spanish. They looked marginally taken aback and then they started chatting back. The guys also began taking part, smiling and laughing. There was the odd knitted brow and, by the time they finished their drinks and left, he’d obviously charmed them. I just sat sort of open mouthed. For his job ‘L Boy’ has travelled a lot so he has a smattering of different languages including some Chinese and the odd word in… (this is where as a true Brit I show my ignorance of other countries languages), er the language that they talk in Ethiopia.

Wow! I was impressed and asked him what he had been talking about. "Usual stuff where they came from and what they did” he replied. “They live in London and have been here for a few years. Trouble is they’re from Seville and, as I tend to travel to Barcelona for work, I kept confusing my Spanish with the Catalan…oh and I ruined the whole effect at the end when they left…." "What did you say to them, they did look a bit puzzled?" "Even though they’ve lived here for a while, I wished them a 'Happy Holiday!’”

The next day as the sun was shining, we decided to have a good walk round London which is always fun. So it was off through the park and down to the South Bank of the Thames, then we turned right and headed on past the London Eye with its huge queue. On along the Embankment and past a plaque that I’d never seen before which was a memorial to the victims of CJD and on towards Vauxhall past some impossibly expensive flats.

We wandered in to see how much they cost purely out of idle curiosity and immediately we were pounced on by ravenous sales staff. Anyone would think there was a property downturn. We escaped with our lives…just.

Then it was lunchtime. "I think I would like something light like a salad" said LibidoBoy. We found a café/restaurant. It was Portuguese although he decided that he didn't know enough of the language to attempt a conversation with the people serving. I’m not entirely sure they were Portuguese anyway. We looked at the list up behind the counter scanning for a salad. Then his eyes fell upon a buffet in the corner. Paella. Chicken. Pasta. Various Veg and bits of fish. "I think I'll have the all you can eat buffet", he said. So bang went the salad!

In the evening it was back to the same venue as the previous evening. I’d made preparations. Due to the volume of the previous nights gig, I’d gone and bought us both a pair of earplugs.
So after the largely middle aged male audience for Walter Trout it was a far younger energetic and bigger crowd for Rap artist Roots Manuva. 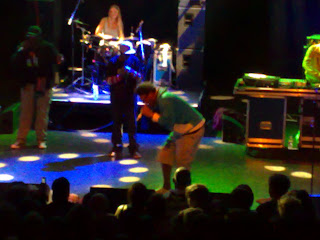 It was a near sell-out by the looks of it, which meant the top balcony was open. The upshot of this was that it appeared to be raining as beer sloshed from the crowd above as they danced. Being a pompous old git I often opine that it good to experience new forms of music. There are ones that perhaps we glibly write off as "rubbish". Rap is one such example The number of times I’ve heard people trot out wearily, "the c is silent as in rap" ho ho ho! People may not like a musical style but it’s pretty clever what with the samples and the rapid poetry and live it was a lot of fun. It was a home crowd, who were going wild. There is a lot of prejudice surrounding this music.

The audience in my unscientific sample appeared to be fairly evenly split male/female and black/white. So it can be a force for good. Maybe because of the reputation that it has, or perhaps because of the average age of the crowd, before we went in we were frisked fairly comprehensively by security. Searching I assume for weapons. Something that didn't happen the previous night for Walter Trout.

We sat there drenched in beer, smiling beatifically as the kids danced and we listened and tapped our feet to a terrific artist at the top of his game and, thanks to the earplugs, at an acceptable volume.


Stop press: Blubberwatch update: No change. However I have visited a gym just round the corner from the BBC which opens at 06.30 each morning. May sign up, "Think thin for Xmas".
Posted by Alex Lester at 08:38

Noooo not the gym, don't do it Oh Great One. Just avoid the buffet, leave that to L boy and go for the salad you can do it - it works for me (of course it does I hear you laugh).