UP UP AND A WAAAAAHHHHHH!

Spectacularly busy week (by my standards anyway). After the show on Monday morning I hopped on the train up to Birmingham to visit relatives and was unable to sleep in the "Quiet carriage" due to an influx of noisy schoolchildren and then the conductor/guard yelling "Tickets..passes" above the hubbub.

Am I becoming a grumpy old man? When it says "quiet carriage" does it mean just that? Or is it just the name given to the rolling stock so the coach may as well be called "Jennifer". However I like to think I am still liberal enough to be in favour of gun control and unlike the pub bore I am still not likely to respond to any question with the lightning riposte: "Bring back hanging…the birch….spell in the army will do 'em a power of good…scrounging off the dole….coming over here taking all our jobs….would you let your daughter marry one?"

Came back early afternoon, had a shower and went to meet a friend outside a small club in the West End of London for a low-key gig by a fabulous singer/songwriter called Beth Hart. She is very earthy and has been lumbered with comparisons with Janis Joplin. As she is a former alcoholic who has had substance abuse problems which she freely admits. I hope she doesn't go the same way. Maybe she could have a quiet word with Amy Winehouse while she is about it.

It was a standing-up type gig so me and my even smaller friend didn't see a lot, which sparked a thread on the show about there needing to be some sort of small person legislation at these events to ensure everyone gets a good view. One thought was to drape string across the venue with it lower nearer the stage and higher at the back. So you would take your place in the hall where the string just brushed your head. Bumped into Johnnie Walker who was enjoying the gig and being tall he could see too! Jeff Beck was slated to turn up for an encore of "Whole Lotta Love" but didn't make it. However it was a good show and eventually I got to bed at about 10.30pm just in time for a three hour sleep.

Looking back at what I have written so far it seems there is only one thing for it and that would be for me to be a benign dictator. Perhaps it is just an outbreak of "Small man" syndrome.

Thursday and it was out to Oxfordshire for the week’s main event. Nick Marley listens to the show and for years has been telling me what I really need is a hobby. The hobby being flying. He is a partner in the Yeoman Light Aircraft Company who import a rather fancy microlight aircraft called a 'Dynamic' which is made in Slovakia. I have resisted going until now as frankly I am not sure that I have the mental capacity or the temperament to be a pilot. So I didn't want to waste his time.

However curiosity prevailed and so I accepted. 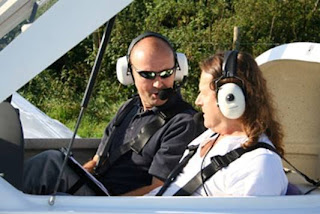 If you say "Microlight" to laymen like me you think of those fabric things with a handlebar and a person or maybe even two people freezing in helmets and thermal underwear as they bounce around the skies looking uncannily like a pair of gonads from beneath.

Technology has moved on and now they can look and act like "real" aircraft. This one had a radio and GPS, a heater and all sorts of dials and switches. I was introduced to Sean who oozed confidence which is good for me as a rather timid individual. Richard North had just flown in from Cambridge in his and said that pilots often were keen motorcylists as well. Oh rats. I thought I have never been temperamentally suited to motorbikes either! A short time later Mike Gregory, a retired traffic policeman, arrived in his. He was obviously born to fly after a lifetime stuck in traffic for his job. 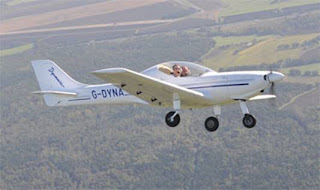 The landing strip was a field. After all the checks we set off and up we went. It was terrific and a lovely sunny morning as we flew over Silverstone and near Didcot Power station. When we were at 2,000 feet and doing about 100- and- something m.p.h. as I don't understand "knots", Sean said: "I gather you have safety concerns". Which was his polite way of saying "wuss". "Well I do worry about things like the engine stopping". Having spent too much time watching Air Crash investigation on satellite tv. "Lets see what happens" he said and promptly switched it off.

"What do we need to do if the engine stops?" Me: "Pray?...be the ones that nobody remembers in the plane with Buddy Holly or Patsy Cline?"


A: The Big Bopper. Richie Valens and Cowboy Copas and Hawkshaw Hawkins.

"No (patiently. Realising he has a potentially hysterical idiot in the cockpit with him). Look for somewhere to land. If we look around us we can see some good flat fields and a disused airfield over there. There are also a couple of farmers field / landing strips over to our right which are in easy reach. Now whilst we have been looking for potential landing sites four minutes have elapsed since I turned the engine off. In that time was have lost 250 feet of height. That is not the same as plummeting to the ground and leaving a smoking hole now is it?" (These conversations are taken from memory which was trying to cope with a lot of different brain signals at the time so they may not be wholly accurate).

So if we start the engine again up we go." Up we went and then Sean said. "Let’s see what happens when we go so slowly that the plane stalls……..." "Good wheeze" I whimpered. It shuddered a bit and the nose dropped. "Here you have a go". Ulp! 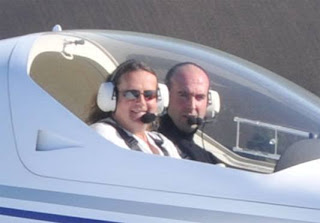 I took the stick and was amazed at how sensitive the aircraft was. I was not going to trouble the rudder pedals on this occasion as it was all I could do to concentrate sufficiently to turn the aircraft and climb and descend without laughing hysterically and clapping my hands with glee. Then it was time to see what the microlight could actually do performance-wise. Sean has well over 20 years flying experience in all types of planes and he flies these for fun because it was "real flying". We turned sharply and it felt that the aircraft was actually in water due to the amount of air flowing over the wings. I felt rather dizzy. "We are pulling one and a half G so squeeze your body as if you are straining at the stool" he advised. "this will help push the blood back to your brain so you don't suffer a grey-out". Luckily I had just been. I hate to think of the state of the Red Arrows Cockpits after a particularly energetic display - and you thought that was smoke coming out of the back of those jets!

We flew around for a few more minutes and then floated gently back to earth. What an amazing experience and a far cry from my previous encounter with light aircraft more than forty years previously. Nice People. Nice plane. Nice time. I will have to think hard about my suitability to join the world of aviation. Maybe I should just have a trial lesson or two….

I teased you on the show before I went telling you I was going to do something for the first time in a long time. You naturally responded with choice remarks such as "Buy a round. Get a haircut. Have a bath" and also "get kissed" which is horribly closer to the truth than you realise!

My first flight as a very small boy was spent sitting in the tail of a light aircraft with my Father and Uncle Ted who was the pilot. I was terrified and my poor old Dad had to hold my leg all the time to make me feel safe. At one point he let go and I asked him to hold it once more. I was very aware of this when I went up in the Dynamic. It is a probably an etiquette thing. Nothing I have read about the cameraderie that exists in the aviation world has ever said it was acceptable or even desirable to reassure nervous passengers by holding them.

You were smiling Alex soooooooooo, must have enjoyed yourself!
I know what you mean about going to a gig and not being tall enough to see what is going on, I have been with my eldest son a few times, he is 6ft 6ins and can see all!

If there was more of the 'grumpy old man' sydrome then maybe the country wouldn't be in the economic state it's in. It's all these youngsters earning bonuses off failing banks. Would you let your daughter marry one, now (as opposed to three months ago)?
Plane crazy!

Too small for a mile high leg over..the cockpit that is..not..er...

Looked fro the parachute did ya?
One other word to add.

Many congrats on going up in one of those things that have a heater.LOL.

Statistics show that you are safer flying than crossing the raod. Only thing is that you only crash the once from a great height.

Flying is such a superb feeling, it is a world within a world where you can allow all your troubles to vanish for a while.

I guess though you will be adding MSFSX (flight sim 10) to your chrissy list now.

Good to see you've been flying Alex. great fun isn't it? Hope to see you & your mate fly into Popham on one of their event days. Next one is Jan 1st, weather permitting of course!!