I SHAKE THE RAIN FROM MY SWEATER 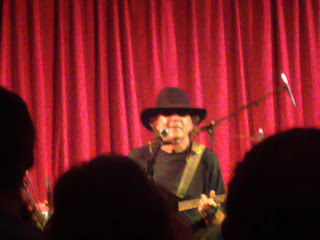 Not been to anything for seemingly ages so decided to rectify that on Friday night with a trip to a small venue in West London not too far from the BBC TV centre in Shepherds Bush called "Bush Hall". This is another of those standing only type venues which is actually tiny so holds a couple of hundred. It is a nice old theatre with enormous character. Me and my mate "Libidoboy" were off to see the "Swamp Fox" Tony Joe White.

The Boy wasn't too sure if he was coming down from the Midlands by car or by train as he didn't know if he was going off to meet a new woman in Guildford the following day. If he was. He would bring the car. If he wasn't he would hop on the train. He was havering...... "There are trains to Guildford too you know". "Oh I'll get on the train then". He was an hour late.

We went and had something to eat in a cheapish Italian restaurant before we went to the gig. Then got on the tube out to Shepherds Bush. Arriving before the concert it seemed a good idea to find a pub to while away an hour before the doors opened. We found a place and went in. Libidoboy's eyes swivelled round looking for likely victims. As he spotted a single woman at the bar I was there before him standing next to her and ordered the drinks. They had run out of lager! "What crisps have you got?" "None" "How about a Guinness and a pint of bitter? They had the former but ran out of the latter by the time they had pulled 7/8ths of a pint. "This place is changing hands on Monday so we are running the stocks down" said the barkeep. I gave a spirited rendition of one line from "The pub with no beer" and asked if they were going to charge me 7/8ths of the price of a pint. The woman smiled and said "Quite the comedian aren't you - is this your local?". "Er not if they don't have anything to drink it won't be" I quipped. I was losing her...she went outside and entwined herself round a very large tough looking bloke. We leaned against the wall and watched the world go by.

When the venue opened we went in and queued at the bar. A bloke in front of me was complaining about everything. He said he had seen Tony Joe White in Nashville while sitting at a table drink in hand in a glass. Now he was going to have to stand up and watch him with his drink in a plastic cup. I think his friends wished they had left him at home.

To say it was a low key gig was an understatement. Support act Emily Barker came on with her guitar in a case direct from the Tube tuned up and started up. Libidoboy was entranced. She had a nice voice although I thought her material was rather weak and she lacked presence. She needed to be more assertive I think as a selection of people talked loudly through her set.

After about half an hour she finished and our legs had gone sufficiently numb not to worry about standing any longer.

On sauntered TJW and his "band" well a keyboard player and a drummer. He has enormous charisma despite hardly uttering a word. Sitting down. Stratocaster plugged in. Hat and shades on and they were off. It seemed to me and I can't say I am an expert in the field. He loves his extended jams. Tony Joe White is a distinctive guitarist and every so often would mumble half a lyric. This seemed to be mainly about "rivers" or"boulders" from what I could tell. This is not a criticism I hasten to point out as the overall effect was mesmeric. I peeked at my watch and 45 minutes had flown by. Biggest cheers of the night were obviously for his "hits" Polk Salad Annie. Steamy windows and for me the highlight of the evening and worth the price of the ticket alone; Rainy night in Georgia. When he finished they left the stage. We shouted for more and nothing happened. House lights didn't come on and so we waited. Suddenly Emily Barker came back and asked for Security backstage. Not entirely sure what was going on but the drummer came out to tell us that it was "Like Saturday Night Live back there" and that they would be out when it was all sorted. We reckoned there had been a dressing room invasion possibly by a dancing fool up the front who kept trying to give Tony his hat.

After about 20 minutes they were back did another extended jam and left. As we exited we saw several police vehicles and attendant coppers.

It was 11 pm. What to do now as the night was yet young. Camden seemed a good ruse so waiting for the Tube we noticed Emily Barker guitar in her back getting on. Now that was unstarry! Due to the press of people there was only one spare seat so seeing as how Libidoboy is 6 months my senior I gave him the seat. 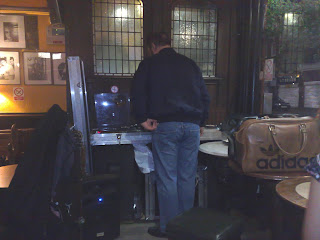 Went into a pub that was playing dance music and had a pint and a bag of crisps. This is where Simon and I differ. He is constantly on the move. I like to get comfortable. "Lets try that place over there" he said so we went across the road to a pub called "The Elephants Head". This turned out to be a stroke of genius. There was an old guy in the corner with his wheels of steel giving it obscure reggae, ska, rockabilly and rock n roll. Until 2.30am. So more beer and more crisps. At one point the conversation turned to leaving the loo seat up. The Boy reckons this is a microcosm of all that is wrong with male/female relations.

In a truly democratic and equal relationship. Half the time the seat would be up and half the time it would be down so why worry? My view is that is a courtesy to keep the seat down and shows a tender and caring side. I said he should just let it go and not argue the toss as this only led to frustration and anger. He reckoned that by caving in I would appear weak. Not sure if that argument was resolved but it did carry on for several more pints and packets of crisps. Chucking out time and we stopped for a burger which at £2.50 seemed surprisingly good value for London and was pretty tasty. Walked the mile back to the flat and was in bed by 3am after another terrific evening. Woke up at 8am. Libidoboy had a headache. I left him to it. I had to get off to Hastings so went for my train whilst he wondered if his date in Guildford was still on. I left the seat down.

Things beginning to move again in the right direction of last weeks "stall " Lost another pound or so. It is difficult to know precisely how much as the read out on the scales is so small. However there appears to be a widening gap between 12 stone 7 and where the needle is at now. Not sure if the beer and the burger and the crisps are going to count against me on this Thursdays "Wacky Weigh in". One thing is certain. With all the crisps my blood pressure is probably several points higher than it was before the weekend.
Posted by Alex Lester at 03:10