CLOCK OF THE HEART 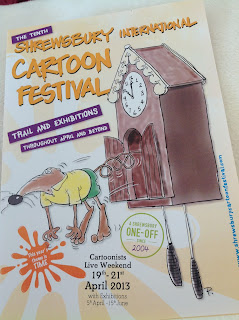 Ten years since it started from small beginnings each year it has got bigger and better.

It was a conscious effort to start small and it seems to have paid off. As a casual observer and fan I also think it benefits the town. The council appears to think so too as do a number of other local sponsors and a host of volunteers. However, not everyone is happy about it as I learned chatting to Roger Penwill, one of the organisers and no mean cartoonist himself.

"I don't approve of this sort of thing in Shrewsbury. We’ll be having one of those lapdancing clubs next!" 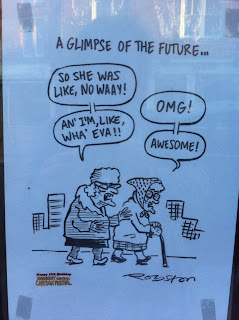 The festival has a host of events from workshops to lectures and exhibitions from some of the world’s top cartoonists. This year there was a visit from Australian cartoonist, Dean Alston; he comes over every year but this was the first year he'd had an exhibition of his own and it was certainly worth it.

Children weren't forgotten either as there was also a show of caricatures done by local youngsters.

As someone who can't draw I like to go along each year to rub shoulders with the talented and hope some of the charisma will rub off. So far it hasn't, sadly. Although I've had the good fortune to meet some supremely talented and funny people. It was nice to meet up with the excellent Bill Stott again and The Surreal McCoy who last year told me to call her "The". This year as we know each slightly better I now call her by her real name. As well as being a very funny cartoonist she also plays a mean accordion. A quick Google reveals her work with the London Klezmer Quartet, Bonnie Raitt, Robert Palmer, Indigo Girls, Boy George and Sinead O'Connor.

All this and she draws!

I discovered Cathy Simpson who caricatures as well as being an artist illustrator and journalist. She's also a near neighbour of mine so hopefully I can suck up sufficiently so she can come along to St Michaels Hospice in St Leonard's and do some caricatures for us and maybe exhibit at the annual Art Exhibition later this year. 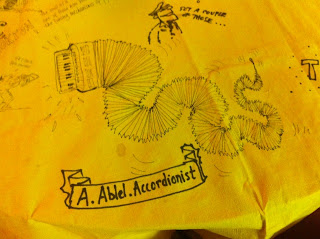 For me one of the highlights of the whole event is the social side. On Saturday night there is a meal and drinking. As I've mentioned before on the show cartoonists are unable to gather without drawing. So wisely all tables are covered in paper cloths which are swiftly covered with imaginative and often bizarre sketches. 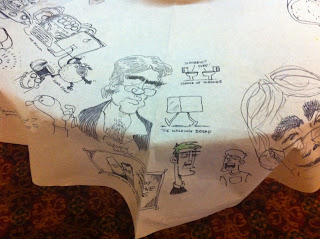 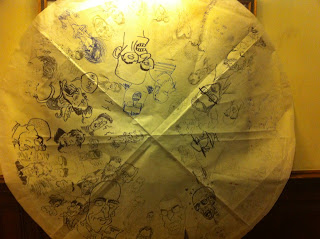 This year – foolishly - I was asked to help compere an event with another of the festivals patrons, former Guardian journalist and author, Martin Wainwright.

This involved two teams quick fire sketches on given subjects. A witty and erudite commentary from Martin and grim mugging from me! 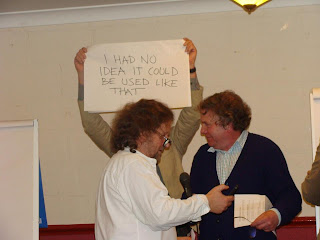 I also had the chance to have a good long chat with Clive Goddard who supplies wonderful cartoons for the show. 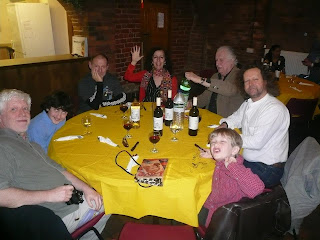 After the food and games it was back to the Lion Hotel the ancient coaching Inn on Wyle Cop Dickens and Darwin among its celebrated former guests. The place is festooned with cartoons from the festival and it was to the bar for more drink conversation and music. I'm amazed just how many cartoonists also play instruments. Clive brought out his ukulele. A couple played the tiniest piano I've ever seen and sang. Whilst all this was going on Helen did a caricature of me. 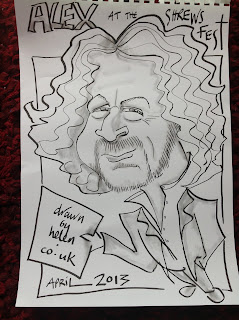 Roll on 2014. Wonder what the theme is going to be? I think I heard some muttering about music. Whatever it turns out to be make sure you come along. I make no apologies for this puffery as it's a terrific event and makes you realise just how much pleasure cartoonists add to our lives.

I think I will make the effort to go next year. They seem to run some amazing workshops over the course of the weekend. I have noticed a couple of the exhibitions are still running so might get across country to see them before they close. Its one skill Id love to learn, I can see cartoons in my mind but translating them to the page is a whole other thing!Thanks for the blog & the pictures.