Had a very tedious couple of hours at home over the weekend doing my accounts. I have been interested to see how the move from Birmingham to London has altered things. My use of petrol has plummeted by 75%. However my public transport costs have risen by a similar amount. This is because I find it easier and more convenient to travel by train and tube and bus now that I am in London, whereas doing a commute from Hastings to Birmingham every week meant that I knew every bump in the M40 and was doing up to 35,000 miles per year.

Having admitted the above doesn't mean necessarily I am turning into an Eco Warrior. It is as it should be in terms of getting the public (i.e us) to do what is best and that is to use these services if they are a) Convenient and b) Cheap enough. I have found by judicious use of prebooked tickets I can get to Birmingham and back for less than the price of the petrol I would have used. This also enables me to be asleep on the train drooling and scratching myself which has a lot more to commend it than doing something similar behind the wheel of a car.

The weather was so vile over the weekend that apart fro going to draw the Tombola for the St Michaels Hospice summer Fayre in St Leonards, I stayed in and did a load of chores including the above paperwork. Also set to reorganising the CD's in the spare room. Space needed to be created as there were too many "A's" and "B's" to fit on the shelves so a lot of reorganisation was required. Having completed this I thought for the future it would be good to move some of the sub-genres so they would be co-sited on one set of shelves rather than being spread out on their own and interfering with the mainstream stuff that I have a lot more of. (Screams as inner Nerd bursts through his chest like the Alien did to poor old John Hurt).

Whilst I was placing the Country next to the Rap and R&B it did occur to me that I had the possibility of a whole "Heat of the Night" thing going here. If you have not seen the film or read the book: Black Detective Virgil Tibbs sent from Philadelphia to Mississippi to investigate a murder. Meets horrible racism. What sealed it as I was placing the CD's on the shelves was that these had been constructed by an excellent carpenter by the name of…..Mr Tibbs.
As I closed the door I could swear I had shouting and gunshots. Maybe it was an overactive imagination.

Weather so vile that the front door swelled so unable to open it. As it is a new door I am not going to get into the shaving a bit off here and there in case it ends up like the old one which had suffered mightily from "tweaking" over the years. It ended up being rather saggy and with the wind howling around the edges so that internal doors kept slamming and my hair would move whilst I sat watching the TV. This is a good reason why many houses are constructed with a back door.

Monday went off to the Midlands to see my Dad. Having prebooked the train ticket I had plenty of time for an early morning bagel. The branch of "ACMEBAGEL" had just opened so in I went expecting one of their delicious tuna delights. I particularly enjoy these as they are relatively healthy, taste nice and the smell of fish drives my Fathers cat wild. It actually growls sometimes. Particularly when we are playing his favourite game of "Stretchthecat" on the stairs. This is fairly simple but gives him hours of pleasure: He runs at my ankle then up the stairs digging his front claws in the stair carpet. I then grab him by the hindquarters and pull him gently backwards whilst he tugs on the carpet, er, growling. Then when I let go he decides to lie on his back on the stair daring me to stroke his stomach. At that point his little paws are a blur and he is in "look at me I am a tiger with these sharp teeth" mode. When this activity stops all you do is look at what remains of your hand and forearm and think to yourself "who needs to self harm when you have a pet?"

I have just read that last paragraph and realised I must be channelling the late Beverly Nichols!

However on this occasion I and the cat were thwarted. The Bagel Wrangler looked at me and said "we don't have any". "What no Bagels? You have just opened! Why open if you have nothing to sell??" I flounced out with the eyes of the Bagelbouncer boring into my back and got on the train. 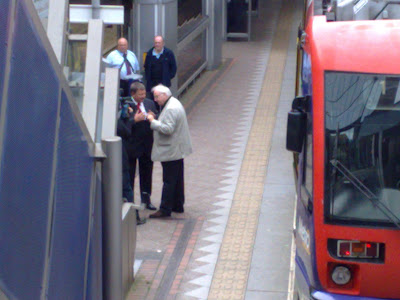 When I arrived at Snow Hill station in Birmingham and crossed over to the Tram, Pete Waterman was there being interviewed for TV about something. Knowing Pete Waterman I expect is was something to do with trains.

On the journey back I headed for the "Quiet Carriage". This is where allegedly people talk in whispers, don't listen to loud music and switch off their phones. On one occasion a couple arrived with their baby who was silent for a while and then started yelling. Wondered if they realised that this rendered the quiet carriage er unquiet? Perhaps there should have been a "No Mobiles. No Loud conversation. No music and No children" policy.

Either that or they could have played a sort of aural peek-a-boo and rushed from the quiet carriage back to the ordinary seats and then when composure had been restored rush back into the quiet zone again. Just as stereotyping and racial profiling is wrong, I noticed a youth across the aisle who was settled in for the journey with a copy of a car mag. Copy of "NUTS" and 8 cans of strong lager. "Uh oh" I thought. Hang your head in shame, Alex Lester. The only sound from him in two hours was the occasional "tscchh" as another can was opened. Back in London he put all his empties in the bin and got off. He was probably glad to leave due to the noise a middle aged woman had been making with her constant phone calls.

I notice the autumn more after the weekend as it is now obvious that the leaves are beginning to turn. It is getting darker earlier as well as still being twilight when I leave the BBC in the mornings after the show. I always take the same route through the park and am enjoying seeing the changes. Although it is always better when it is dry. 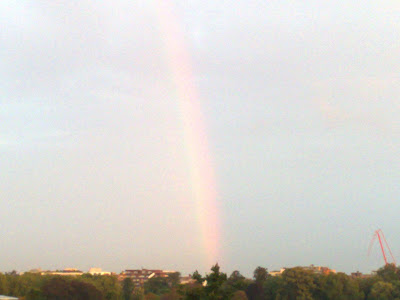 However slight drizzle did enable me to see a rainbow which appeared to end at my flat. Yaaay possiblity of a crock of gold? Well not for me, just a reminder that the rent is due shortly. Dang!

As I intimated in last weeks blog, Blubberwatch has slowed again slightly so only lost a pound over the last seven days. Hopefully the momentum will increase, although I do have two things to go to at lunchtime this coming week. I will look for the "light choices" on the menu. On the whole I am pretty pleased with the way the diet is going. At least it is still heading in the right direction. Also by burdening you with every ounce you are keeping me on track, so thank you.
Posted by Alex Lester at 22:46

Regents Park has shown us yet another delight ... your rainbow.

Being a bit of a 'lardy' myself, I splashed out on Paul McKenna's -'I Can Make You Thin' dvd's a few weeks ago. The box set sat on a stool in the front room for a while. It was then transferred to a bookcase (in the same room). It will come out of it's packaging and, eventually, make its way to the dvd machine. I'm just waiting for the 'right moment'.

Well, I tried to remain ANON, but alas the Blog won't let me. Now I'm up there with you Mr Lester - I'm out !

swap you for a yoga dvd by some strange woman who thinks she is a ntive american and a bollywood workout dvd both of which have yet to be opened!

I've heard it said that after the initial good weight loss, things slow down and this is why so many people give up, but as long as you are losing weight, however little, you are doing well. Keep going Alex!

Thanks, 'Merry Widow' but now I've bankrupted myself with my dvd's, I'll keep them for a while longer -just to show willing. However, I'll keep your generous offer in mind.

Although, perhaps once Mr Lester is down to his ideal weight, he might like them for exercising the excess away ?