After last week’s disappointing "Blubberwatch" when I only last a pound, it seemed we were back on course after the Thursday morning, 10.30 wacky weigh in. Starkers and staring bug- eyed at the tiny readout on the scales, another 3lbs has vanished somewhere. I am now a stone and a half off my target weight of 11 stone.

We had been talking on the show about the possibility of there only being a finite world supply of fat. Which means that the weight I have lost has been added to the frame of someone elsewhere in the world. I can only hazard a guess but it may suddenly have appeared on the hips of a woman wearing sweat pants sitting at the counter in a branch of "Applebee's" in South Dakota and working her way through the card. If you think this is a crackpot theory, how about this for "proof": If the world population continues to rise at its current rate we will eventually run out of stuff to eat. This means more but slimmer people and so the global fat content remains the same. QED!

However exit polls (ugh!) for this week don't augur well for such a large reduction so the woman in the diner may still be able to fit in her car for another few weeks. Now over to John Snow with the swingometer or maybe he should have brought the sandbox instead.

Quiet week of medium rather than high jinks after all the excitement of the last fortnight. I had to get my TV fired up over the weekend as I had a lot of stuff recorded that needed watching. I tend to only find time to watch the box at the weekend so sometimes actually have to sit down and wade through stuff I have recorded speculatively. I don't want the electricity used in the recording process to go to waste if I don't watch the end result.

This meant 6 hours of "Star Trek Voyager" (I had not seen the first few episodes) So my inner nerd has been satiated now I know how they got catapulted into the Delta Quadrant.

I also had recorded several music documentaries. One on Jimi Hendrix - not a new doc by the look of it as there was a lot of footage of the late Noel Redding. However I never knew that Jimi was a big fan of the "Goon Show". Also two programmes in the series "The Blues" - the series compiled by Martin Scorsese.

That, with sundry other half- hour comedies etc, meant I didn't really shift out of the house on Friday and quite a bit of Saturday, come to think of it.

Also a lot of CD filing had to be done. I have still not managed to listen through to all the stuff that arrived when I was in the U.S. Plus there have been a few trips to the record shop. I shifted three crates of product from the car to the spare room and started to file....and file....and file. Until I had filed myself to a dead stop.

Also there before my eyes was concrete proof of my short termism: Because I am only 5ft 6" this means I can't reach the top two shelves without a stepladder. So for ages I have been starting the "A's" two shelves from the top. Now I have run out of space and need to rejig the shelves, moving a large proportion of the alphabet to the top and giving the rest of the alphabet more room to breathe.

This set off a chain of discussion on the programme this week about making our alphabet a bit more interesting and democratic. This could be done by running it backwards from Z to A so that "ZZZ Taxi's" would be first in the phone book. Maybe also adding an extra letter or two. You came up with the brilliant extra letter which was an upside down '?' to be placed in any word you couldn't remember how to spell properly so that it would assume the properties of the missing letter. This to me was the work of a genius, however the knock on effect would be that already discredited exams constantly accused of being easier would in fact definitely get easier. 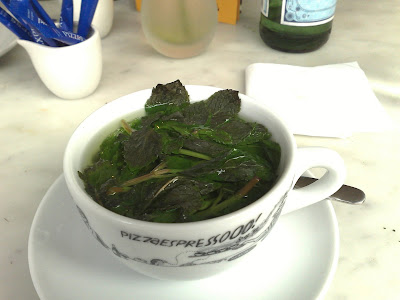 On Tuesday I went out for a salad with Liza, my former producer from Birmingham. She was down to produce a couple of shows with Malcolm Laycock. We were both trying to keep it "lite", though why she needs to I don't know, as she is teeny thin. I was particularly impressed with the mint tea that I ordered, when it arrived looking rather like a village pond.

Walking back across the park later I realised sadly that autumn was nearly upon us. The leaves are beginning to turn. The evenings are getting shorter so soon I will be getting up and going to bed in the dark and also leaving the studio in darkness too. 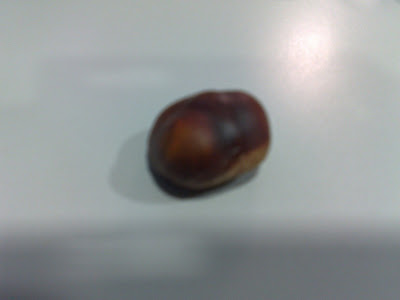 However I stooped to pick up a conker and wondered if it would not be a good idea to have a Radio 2 conker league, alleged Health and Safety issues aside. It would be a marvellous bonding experience for the station. Or then again it could lead to horrendous ego-driven rifts. I went to bed and dreamt of being clubbed to the ground by my colleagues. We are on a knife edge here the whole time.....you have seen Lord of the Flies! Mmmmmmmmm
Posted by Alex Lester at 06:07

I believe in the fat theory - I think I have got the 3lbs you lost! I'm happy to give them back anytime as I don't want them and don't think I deserve them (despite buying and eating 2 tubs of Phish Food ice-cream that is 1/2 price at Tesco!!)

Ooh, Phish Food is half price at Tesco???? I may just have to go Phishing this weekend. Sorry, got distracted there! As you can see, my own attempts to lose blubber are not going too well. Just about to have a curry tonight, too. Oh well. Maybe the show could have a weekly blubberwatch weigh-in for all blubbery listeners too.

I went to Regents park on Saturday..CONKERS everywhere!...If only I could have found them when I was a kid!