IN THE BLEAK MIDWINTER!

Dark Lady and I have an interesting married life in that we don't live together all the time as one or two people have noticed on this blog.
There are a variety of reasons for this not least of which is my hours and her tiny but extremely cosy house, where she lives with her two children.
It is not really fair on them to have to tiptoe around at 8pm as I am asleep.  Plus I have a gazillion CD's in the spare bedroom at my place which would fill her house pretty much completely.
So with this in mind although we see each other all the time we don't spend every night under the same roof.  Sunday nights is usually the exception as we try and make that a family type day if the children are around. This depends on their busy social calendars of course.  Parties.  Football.  Friends coming round. This sort of thing.
So Friday I scuttled off to my place with a burning resolve to start filing the CD's that have been gathering dust on the floor in bags for some weeks if not months. Unless I keep on top of them I will be snowed under. 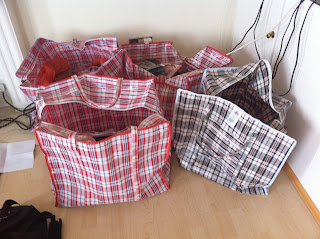 Mentioned this on the show on Monday morning and had a scoffing text from someone deriding my ability to file quickly as I only managed to sort and file the contents of three bags on Saturday.  As I pointed out in my usual warm and measured manner (!), they are not carrier bags full but big bags full.  In this case three bags full. Yessir!  (Cue Drums Of Pun)
Went out for a drink with one of my Best Men, Clive on Saturday evening after enjoying cheese scones and tea with my godparents.  There had been dire weather warnings but not a lot appeared to be happening until  left the pub en route to "Wok U Like"  (true) in order to order my Saturday night takeaway then home to the TV before an early start back to the family on Sunday morning.
As I was striding purposefully takeawaywards I started to notice that tiny gritty snow was beginning to bounce off my rosy cheeks as the snow and the wind started to do their evil work. 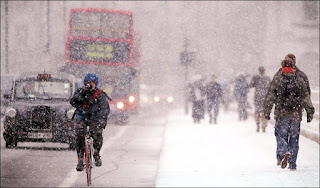 Morning came and there had been a couple of inches of the stuff that had settled and then frozen.  Unfortunately a check on the internet showed that the trains had stopped as usual due to the weather and signal failures.  So it would have to be the car or stay at home watching the TV.  Dang!  The telly had succumbed to the weather as well due to snow on the dish or something.  I had a quick walk round the block and realised that the main road albeit slushy was passable so it was clearing the snow from the garage door and off out.
Now it is generally the case that if you live at the seaside as I do that everywhere from the water’s edge is uphill.  All was going well until the car in front of me stopped at the traffic lights.  Could I get going again?   No.  Luckily a passerby gave me a push observed by a minibus full of Network Rail workers eating sandwiches and drinking tea.
Now everyone deserves a break but I was unable to figure out why they were parked there as it was at least a mile from the nearest railway.  Perhaps they were hiding.  Still they seemed to be enjoying the spectacle.
Once I hit the main road all was well and made good time back to the family home.
Some time ago we bought a Raclette, which is effectively an indoor BBQ device with little dishes underneath the hotplate to melt cheese which can then be poured over the food you have cooked.  In our case meat and mushrooms and onions. It is great fun for all the family. 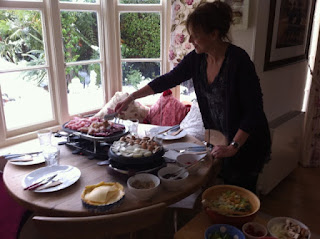 Luckily she had some of the special cheese as the supermarket I usually get it from hadn't got any and like "Men in Black" had erased the memories of everyone who worked there:
"Raclette cheese"?
"What’s that"?
"Special sliced cheese that you...."
"We’ve got cheese slices"
"No that won't do it.  It has a low melting point"
"This cheese melts"
"That’s Fondue cheese not Raclette cheese"
"Ask the lady at the Deli counter.  She knows cheese".
"Raclette cheese"?
"What’s that"?
"Can you get your cheese expert please"
"Raclette cheese.  You always used to have it"
"Sometimes we do sometimes we don't"
"?"
"Looks like we don't".
Luckily the DL found some in the freezer so we were able to use that 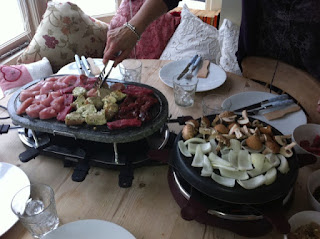 There were five of us for lunch and after we continued with the Harry Potter canon.  I have outlined the reasons why I am wading through them in a previous blog. On to film number three Harry Potter and the Prisoner of Zenda or some such.  Hmmm am I enjoying it more than the previous two?  I think marginally.  Everyone I have spoken to says the films get better.  Well only another 5 to go! 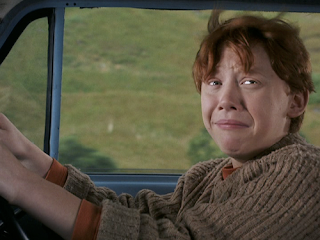 All too soon it was bed time and this is when the children rig for near silent running in case they disturb their irascible Victorian Stepfather.  So music is turned down low-ish.  Computer games volumes are lowered also and relative peace reigns as I drop off to sleep.
Occasionally one of the children forgets and runs up the stairs but they have been brilliant with me so I can't complain.
The Dark Lady on this occasion needs a little "education". I have pointed out that if they are in their bedrooms with the door closed and their music up loud standing at the foot of the stairs and bellowing their name until her beautiful face is purple has very little effect.
It must have been about 10pm and I was fast asleep when for some reason she needed to contact her youngest.  Advancing to the stairs either amnesia struck or the thought of walking up a flight of steps seemed all too much.
I woke with a start when the Dark Lady in her best Sergeant Major parade ground voice called gently for her boy.
"JAAAMMMMIIIIIEEEEEEEEEEEEEEeeeeeeoooh"!!!!!!
Her roar tailed off to a whisper as she realised she had forgotten that I was in the house.
I have a suspicion that there will be some teasing about this in the future!
Posted by Alex Lester at 06:07

Well it's been a while since I commented, have been keeping an eye on the blog though. Sounds like your settling into married domesticity very well :)

I admire your endurance with the HP movies - they don't get any shorter.
If ever there was a series of stories which should have been left to encourage young people to read and use their own imagination that was it.

You've done it now. There's been a run on Raclette machines. Argos are out of stock - if you want one now you've got to go and see Franz in the pub car park.

likes the DL even more now. I have done that yelling "JAAAAAAACKooooh" thing so many times. Swapped with The Husband - he now works the social hours, I get to hang out with you guys in Nocturnia - waiting for him to do it to me so I can smirk in my sleep.

Looks like you are having a Mongolian Barbeque at your place!
We cant cook at the table here cos we have 2 furry little thieves who love bacon and cheese particularly! They'd also love those big bags you keep your CDs in.
I think my cats want me to listen to the Shoe in real time because they keep trying to wake me up at 2am...