FUNERAL FOR A FRIEND

I mentioned on Facebook last week that my best friend of 36 years standing, one of the two wonderful people who agreed to be my best man at my wedding to the Dark Lady in 2011, had died suddenly.

It is a bitter blow. A far bigger blow to his parents who at this late stage in their lives have now lost both their children, (his older brother died 40 years ago as a student). How cruel life can be. They are a lovely couple are Bert and Molly and this is not the way things are supposed to be. 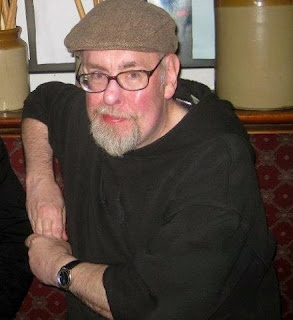 I first met Clive at a student party in a grim house in an even grimmer suburb of Birmingham. He was in the year above me and we bonded immediately. I can still remember saying to him the next morning when having slept on the floor of this vile house, unwashed and with a horrendous hangover waiting for the bus into the city centre.

"Nothing beats a good evening’s bullshitting"!

We decided that night due to our mutual interest in comedy and also my interest in music to go and see "Ray Stubbs the amazing one man blues band. Comedian and compere Mike Elliot".

It was for the Aston University Geordie Society. We were at the lowly Birmingham Polytechnic but we shared a campus so that was alright.

This was the first of several times he saved my life!

At the end of the evening as we were leaving having witnessed Mr Stubbs and a sweating compere shouting "Gateshead" every few minutes I staggered up to this bloke and asked where the comedian was. Not realising it was comedian AND compere. Rather than COMEDIAN. And Compere.

Clive saved me from a kicking on several occasions over the years.

I moved into radio, he into journalism and freelance comedy writing. He was the founder of a tiny magazine called The Henley in Arden Digest, which was notable for the local copper phoning him up with crime and accident tips. He delighted in the name of Sgt Scudder and would occasionally ring and mutter conspiratorially down the phone:

"Clive? Scudder 'ere. Got a nice fatal for yer"!

If someone had met their end on the busy A34.

1979 dawned and Margaret Thatcher was elected Prime Minister. His business partner did a runner with the money. Recession arrived and the magazine was finished.

By this time I was with the BBC and travelling round the local radio stations, mainly in the North of England. Clive loved to travel by train and would come and visit. The visits were broadly similar; Pub and conversation. In fact over 36 years we have done little else. Just in a variety of different locations.

Even if we were apart we would be in constant touch. He had ambitions to be a comedy writer. He was a very good one and the funniest man I have ever met. When we were on a roll, sitting in the pub firing out ludicrous ideas, people would edge their chairs closer to hear what nonsense we were talking.

As well as being a scream he was also very clever and well read. He was also good and free with his advice. This was useful as he picked up the pieces after a series of romantic failures on my part.

We didn't always agree. Occasionally there was the odd wounding word. He may have been slightly jealous of my perceived "success".

I never understood this. Here was a man who had not only written the "Real water" sketch for “The Two Ronnies” but also the excellent "Lester's Lists" for me which we repeated a few to celebrate my 26th anniversary on Radio 2. This was a man who had also started an entirely new fetish!

During his time at Mayfair one of the many editorial jobs was to make up the letter for the letters page as they received so few genuine ones.

One day for a joke he invented a letter from someone who claimed they really liked pouring custard into their knickers!

To his surprise they received a flurry of genuine letters from people who were into this but thought they were alone.

It started small with magazines. Then there were films and latterly websites. He became a celebrity in this world. If ever there was a sex show on TV up would pop "Bill Shipton" (his pseudonym) with a bucket of gunge and a posse of scantily clad women. Far from being "filth" it was Carry on style slapstick comedy where the woman always came out on top!

"Belle de Jour" with Billie Piper featured Sploshing and got in touch to find out how to do it properly.

"So that's when the guy has sex with the gateau? No No No. The woman sits on it"!

He loved thinking up ludicrous plots and making his messy movies in his own studio. He was adored and feted the world over. Home Box Office from America did a big piece on him. Film Director John Waters waved a copy of his magazine on the David Letterman or was it the Jay Leno show?

Trouble was this took up all of his time so he wasn't able to do as much comedy writing as he would have liked.

Not that he was unhappy. True he could be a grumpy sod. However that may have been partly due to the Crohn's disease he suffered for the last 20 years of his life, restricting a lot of his travels and sapping his strength.

He was the life and soul of the pub: The Marina Fountain in St Leonard's on sea. He did the newsletter for them which was full of information about the bands due to play, and scurrilous gossip about the regulars.

When I went to meet him it was very difficult to talk to him uninterrupted as a constant of stream of friends would drop by his table to chat.

He hadn't enjoyed the best of health over the last few months but last time the Dark Lady and I saw him he looked a lot better and was in good spirits. So his sudden death is a terrible shock.

He is irreplaceable and leaves a massive gap. Everyone who met him adored him. He always had time and loved nothing more than a good conversation. If it involved pub… So much the better.

I often see things, think of things or you tell me things and I think

"Clive would love that"

Who can I tell that too now?

My life is less colourful. There is less laughter. Still I have the most wonderful memories of the funniest and most generous man I've ever known.

I am so very, very sorry about the passing of Mr. Shipton. He looks like a really great bloke. Wish there was something I could say that helps - but no words are ever enough to ease the hurt of losing a good mate. I hope he's now tapping his feet in the pub upstairs with decent rockers and where the pints are never off.

I really have empathy with you Alex, my friend that I've known since we were both sixteen was murdered three years ago,I still try to phone her even now.
Your are right,parents should not have to bury their children it is so wrong in many ways.
Chrohn's disease is one of the most
debilitating, despicable deseases going,pain being exceptionally difficult to control with painkillers,no wonder he got grumpy at times.
You will miss him badly and I am truly sorry for your loss.
Time does heal as you know, just think how different your life would have been without the pleasure of knowing him.

Thank you for your so cool post,it is useful,i love it very much.please share with us more good articles.