"JUST THE TWO OF US"

Busy old time this week, I must say. What I laughingly describe as my "career" has been generally fairly low-key to invisible over the years with many false dawns.

My favourite was being told I was all set to take over a travel show and the next week switching on and hearing Bill Oddie presenting it! Still, I have not done badly so I can't complain; listening to some of my colleagues railing against being passed over for another big gig or being ignored by the management in favour of yet another TV face does strike me that that way madness lies.

Having said that, I can't take the moral high ground on this and over the years I have done a fair bit of feather-spitting, I will admit.
So it was with great delight that I snapped the arm off the people at BBC London when they asked if I would like to spend a week co-presenting the breakfast show with Gaby Roslin whilst Paul Ross was on holiday. 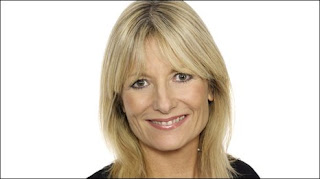 This was a show way out of my comfort zone and nothing that I had done in a few years, but it is these sorts of challenges that keep the mind fresh and the enthusiasm coursing through the veins. I have seen many old and embittered people going through the motions over the years and hope never to be like that.
So for a week when I finished the BTOTD show at 5am, it was a quick whiz round the corner to the big new BBC Broadcasting House which is home to the capital’s BBC radio station.

Security - as you would expect, particularly in this day and age - is very tight and you can't go anywhere easily. So having had a couple of days the previous week (where I went to "shadow" the show) and having been unable to gain access due to my security pass not being validated by the big central computer, I was assured all was going to be well for the big day.

Day 5 Gave up worrying, phoned the producer who came and collected me as he had done previously.

It used to be many years ago when I started at the BBC that you were given a pass that just had your picture on it and relevant information such as name and staff number.


I have long been freelance but back in those heady days of the late 70's I carried my name rank and serial number with pride.

On one occasion when the management were railing against the length of my hair, I said that I would have it cut providing they paid for it. They agreed upon production of a photograph. So once the deed was done I repaired to a "PhotoMe" booth and proceeded to have my picture taken, convict-style, from different angles whilst holding a piece of card with the number 222227N writ large upon it. It worked. They stumped up the petty cash.

Before the security became electronic and, as you read above, more or less impossible to crack even if you have a valid reason for entry, we used to rely on the pass being checked on entry.

They also had an expiry date. Unfortunately, I never bothered to check and so blithely kept going in and out of the building showing my pass and no one said a word. It was only when I realised that document was out of date that, upon next attempting to enter the building, the security staff - trained to spot a guilty face at a hundred yards - would pounce and I would be dragged away to explain myself. In order to get a new document you had to be inside the building where the security office was. You can see the good old Catch 22 coming here, can't you? So it was a bit of rigmarole if you forgot to get your accreditation renewed in time.


One guy I knew doctored his pass so that it showed him pulling a stupid face. No one batted an eyelid as he came and went each day. Not to be outdone, the next pass had him dressed as a woman with a gash of bright red lipstick and a red fright wig. He came and went each day without anyone batting an eyelid. He had planned to replace his photo on the next card with a picture of his cat.

However, for all concerned it was probably best that he left the Corporation’s employment at that moment.

Meanwhile, back at BBC London everyone was very welcoming and helpful as they coaxed me through a week of three hours of all-talk. What was also nice is that - due to the earliness of the hour (comparatively) - they listened to the BTOTD show on the way in to do theirs; they obviously have excellent taste.

It is a very different beast doing a news and current affairs show after three hours of tunes and fooling around.

It wasn't dull, though, as there were a fair amount of lighter items to mess around with. Those of you who made the switch from Radio 2 at that point commented on how grown-up I sounded.

Recovering from my real-deal man-flu, I was a little wheezy, so I reminded myself a little of the late great Sir Robin Day. Not in my interviewing skill nor gravitas. Purely in the chest area (he suffered in the bronchial department. Don't think the cigars helped!)

"So tell me Prime Minister...wheeeze"

"The World at One,40 minutes of news and comment this Wednesday NO Thursday lunchtime..wheeze bubble"

"Koff choke wheeze you are looking radiant if I may say so Anna Ford...koff bubble wheeze"

It was a fun week although pretty tiring being up at 1am and doing two very different shows. Hope to be invited back but it may be they would prefer someone who sounds like they will live to the end of the show. We shall see.

Saturday early the Dark Lady and I were in the car heading up the M40 from London to Shrewsbury in order to take part in the Shrewsbury International Cartoon Festival. I have the enormous honour to be a Patron. This year I had been asked to chair a discussion with Andy Davey who does brilliant caricatures for The Sun and Peter Schrank who - in an equally varied career - is a regular in many publications from The Economist to The Independent. Both men have different styles so it was going to be my job to introduce them and then field questions from the audience.

I could do my David Dimbleby Question Time impression:

"Lady on the fourth row in the purple hat"

We were nearing Oxford when the DL's phone rang. Her face took on a very concerned look.

A close relative had been taken ill with a heart attack. So it was divert time and we headed into Oxford where she hopped on to a train back to London and I continued up to Shrewsbury.

Sad to say as a result I was only able to be there for the talk in the Old Market Hall a quick word with the ever excellent Clive Goddard, who does the brilliant cartoons for the website, and then it was back to London to be there to do child care and anything else that was necessary. So many apologies to everyone at the Festival that I wasn't able to stay longer and enjoy your hospitality. The meal on a Saturday night with a host of tipsy cartoonists is a sight to behold. Not an inch of space is left undrawn on.

I thought I coped pretty well with the crisis and the travelling and the fatigue from the extra work.


Don't forget to make a song request for the Listener's Library,visit here, I look forward to hearing your suggestions. And don't forget to add me to Twitter @alexthedarklord (click here to do so) and also use the same login to hear the latest Audioboo (click here).
Posted by Alex Lester at 17:38

Nice to hear you trying something new Darkus Lordicus! Getting up at stupid o'clock in the morning for the last twenty years, hasn't completely numbed the brain then!

I did listen in to your "grown up" show and was much impressed by your very adult behaviour after years of listening to the thro the night show - but please don't get a hankering to do grown up stuff, my nights would be bereft if you were to abandon all us night-time nutters to go with the big boys.

Who is this mysterious "Libido Boy" you mention?

I hope you are not using the radio to further your career/love interests.

If ever I was lacking in straight-talking and common sense as I so clearly am, lest we look to Lester to annul the confusion or to bury the bewilderment!

what a fab comment from "Wes" - just goes to show that your listeners are still living in a strange underworld - no where else do we get this.

Why thank you "mwhite229" although I think you will find it's The DL himself who is rather encroaching on my own "strange underworld."

B.T.W. isn't "Underworld" the name of the knicker factory in Coronation Street?

Well that was a mildly pants observation! Boom, boom, pow-wow!

Alex, I really enjoyed your BBC London Breakfast Show stint, you did fabulously!