Due to illness in the family, which has rather put plans on hold, things have been pretty quiet in the DL/DL household over the last few weeks. However, due to excellent nursing care and the best surgeons, the patient on the Dark Lady's side of the family is now making excellent progress, despite having a spectacular scar running the full length of his sternum so he is now eligible for membership of the "Zipper Club". This is open to people who have had heart surgery. He is a bit weak after his bypass and feels as if he has been run over by a train but is making excellent progress.

This enabled us to tiptoe out to a couple of gigs. Well, I made it to kd Lang at the BBC the other night while the poor DL was at home being nurse and cab driver. kd Lang was a revelation. I have liked her stuff without being an uber fan, but when Jo Whiley introduced her by saying that Michael Bublé considered her the best female vocalist ever, it smacked a little of showbiz hyperbole. However, he was right. She was amazing with the most incredible vocal control.

If she makes an appearance anywhere near you grab a ticket and go. You won't be disappointed. I was sitting with the fab Clare Teal - no slouch in the vocal stakes herself - who was enraptured. 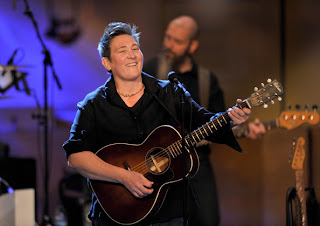 Meant to ask her if singers are born singers or can be trained. Quite fancy bounding onto a stage somewhere where people are expecting "that DJ bloke" to make a short but cheerful speech and then draw the raffle.

"Laydeez and Gennleman, it’s really great to be here with you tonight. Can I just say I regard Cleckheaton as my second home. Before I do the Tombola I'd like to sing you a little song. Music Maestro please. (warbles) I left my heart iiiiiiiiinnnnn San Franciiiiiiiisssccoooooo"

With the initial medical emergency over and the patient reunited with family and home the DL managed to get an evening to herself, so we headed off to the Royal Academy of Music (which is behind the Albert Hall in London) to catch up with a singer we both love but have never seen live. This was going to be a special night as - leaving all his own instruments at home - Paul Carrack had hired a band to back him. What a band: The Royal Philharmonic Orchestra. Despite shaking off the last vestiges of the cold that everyone has had, he was in great voice and ran through a whole selection of songs that he liked such as “Moon River”, “Don’t Let the Sun Catch You Crying”, “All the Way”, “I Think It’s Going to Rain Today”, plus a few of his own repertoire including “How Long” and “The Living Years”.

We and the rest of the audience were enraptured. In my minds eye I was with him on stage:-

"I'd like to pause here and invite one of my favourite singers to the stage, ladies and gentleman, your friend and mine…Alex Lester!!! "

"Why thank you, Paul, wonder if you'd care to duet with me on a little number I am probably best known for...Maestro....

When the gig finished and we were filing out we bumped into producer Dr Strangelove who was equally enthusiastic. We hope the concert was recorded for an album, if so it would be a worthy addition to anyone’s collection.

Contrary to popular myth, Strangeo and I don't live together a la Morecombe and Wise, bedding down in stripey pyjamas with me smoking the pipe in case anyone thought I was gay.

We both had forgotten the other was going to the gig. Had we remembered we probably would have met up for a drink beforehand. As it was, DL and I skittered off home so I could get a couple of hours sleep before the show. Strangelove - who sleeps nearly all day and stays up all night - headed off to the bar!

You may remember from a previous blog that I had surprised the Dark Lady by booking her a long weekend in Venice for Valentine’s Day. We had an amazing time save for one thing: the hotel was not all it was cracked up to be. Upon our return I resolved to pop into the travel agent and make a mild complaint that the details were rather misleading. 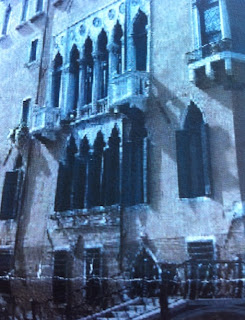 The blurb we had been supplied with showed a grand hotel with the first two paragraphs extolling its virtues. Only upon reading the third paragraph did it mention the word "annex". In other words, we were in a separate building a few doors down. 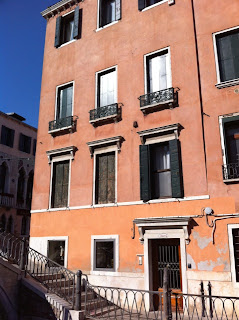 As if that wasn't enough we were given the last room high in the eaves of the annex with non functioning air conditioning. Two beds pushed together in a rather uneven fashion. The only other rooms on this top floor being a staff changing room and a storeroom. The room had no number. We were informed it was 420 but the key fob said 400. We thought this was a last resort room that was only used in emergencies. 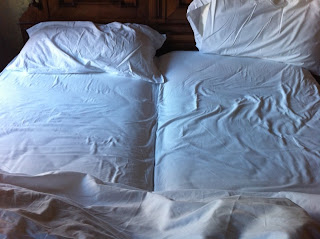 We asked about the air con and were told it was "finished for the winter".

The travel agent was very helpful and concerned and we supplied photographs to back up our testimony. All we wanted was for the details in the brochure to be amended so they were not as misleading. After all, you would not advertise a Rolls Royce and then expect people to be happy when you supplied them with a Ford Ka!

The travel company offered us a 25% refund immediately as a goodwill gesture. In truth it was not about the money, it was about misleading innocent tourists like ourselves.

The hotel responded by saying that it was all perfectly straightforward. We should have looked at their website where there was more information, that we never asked for a change of room and the air conditioning did work...well, there was heating which was the same thing!

At this point the Dark Lady and I looked at each other and the red mist descended.

We explained to the travel agent that this meant war and supplied further photographs and details to back up our complaint.

Back came the Hotel. What did the bloke on reception we had complained to look like? Had we talked to them we would have had everything rectified no problem. Air conditioning and heating in their book was one and the same thing. The room was in regular use and not one used in emergencies when the rest of the hotel was full and what was wrong with using a picture of a nice grander hotel rather than the rather down at heel looking annex?

Another sterner reply was sent and suddenly out of the blue the travel agent called and told us we had been offered a full refund.

Blimey! I don't think this has ever happened to me before.

Bearing in mind the Brit stiff upper lip and general dislike of fuss this was quite a result.

If Joseph and Mary had been British, Jesus would have been born on the pavement between their suitcases as they would have been too embarrassed to kick up a fuss about the lack of accommodation of any sort.

We genuinely had wanted them to explain to the travel company that the details were misleading and it sort of snowballed.

Now with this triumph under my belt, I wonder who or what I should turn my attention to next?

I could - with this new found confidence - muscle in anywhere and take over the show.

"Sorry, Simon, I think you are wrong on this one. Every single person on this show is terrible and should be voted off immediately. I'll show you real British Talent...maestro.

Hello Alex,  I don't get to listen much as I used to, only on iplayer and podcasts, but I think you are a great, entertaining DJ (and probably a Good Bloke too).

If you're thinking of muscling-in on a show, please may I suggest giving Vanessa Feltz an opportunity to practice her Verbal Virtuosity on Steve Wright's show, and you can take over the pre-Chris Evans slot! That would get rid of '2 birds with one stone', and improve my early morning enormously!

Keep up the good work! Love the Shoe

Well done you getting a refund on your holiday - almost unheard of, or did you sing to them, is that why they caved in just to make you stop? Make sure you get the honeymoon hotel right, don't want to mess that one up :)

That COCKtail looks delish... Tootles ToTo - (That's you) See wor I did there?

Forgive my English for Jibberish is my native tongue!!

Jamaica vacation provides getaway packages at some of the most prestigious resorts in the topics and having a group of dedicated travel professionals that know the importance of safe.Caribbean Vacations