Momentarily, the weather improved so much so I had my shades on. I was sauntering across the park using my best "Sashay". "You can tell by the way I use my walk I'm a woman's man no time to talk". A couple were coming in the opposite direction, when they drew level the bloke said, "Alex Lester?"

What is the correct response to this?

This rarely happens. It happened once in West Bromwich after I had been on Waterworld, and more recently as a result of the Radio 2 team failing miserably on Eggheads. However, it is not exactly the sort of level that Brangelina attract.

I am used to wandering about anonymously which frankly is the best way to be. Not sure I could cope with people yelling abuse at me in the street. Or having to worry that your fly was undone or you were "rearranging yourself" when a passing photographer took your picture and you were all over the papers the next day.

The addiction to it may then take hold and you end up being totally shameless like Lady Gaga, Lily Allen and Peaches Geldof. Also, there was that bloke that used to be big in Corrie in the 80's, who was a hog for press attention who went off to the US and don't think was ever heard of again.

Although I think I did read he ended up a doorman at Stringfellows. Imagine that for a comedown? Having to throw people out of a place where you were the one that was used to being thrown out of, if you catch my drift.

What is the correct response to "Alex Lester?"

2) Guilty as charged (No, too Frasier Crane)

4) He is far better/worse looking than me

5) No I am David Cameron/Gordon Brown/Nick Clegg in disguise. Being "Mr Ordinary, I understand the man in the street, er, man")

7) Do you want my autograph? (No, remember we are anti-celeb; we give our autographs to famous people to wipe the self-satisfied smirks from their overstuffed faces).

8) It’s a lie. I was home all evening! (Hmm, hasty may make you look guilty of something.)

9) I never touched her I swear. (Even worse than the above)

Opting for the latter, I discovered I was being addressed by Tony Stokes who was with his wife, Caroline, and they were down from Albrighton in Shropshire. They had come to London to celebrate Tony's 53rd birthday and were going to see the musical, Jersey Boys, as Tony was a big fan of Frankie Valli and the Four Seasons. 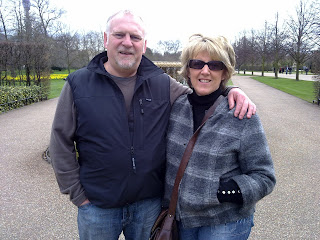 We had a nice chat. Since the programme time change, Tony has been getting up earlier to hear the show. Now, that shows dedication. Anecdotal evidence tells me he is not alone in this. The pluses, such as they are, include being out of the main rush hour and getting more done when it is quiet! All very life-improving.

I was on my way across the park to meet my mate, Libido Boy, who I have not seen since the turn of the year as we have both been busy. He had managed to drag himself away from the "libido" thing and also his band. He is a keyboard player and has been rehearsing a lot over the last few months. Now the band are doing their first tentative gigs.

As he is slimmer than me I did offer him my leather "Blubberwatch" target trousers. It looks that barring liposuction they are never going to grace my wobbly thighs again, especially as American Adventure 3 starts in a month, and we know what that does to my waistline.

He politely turned them down.

We (L. K. and I) were off to the BBC to see Paul Rogers with the surviving members of Bad Company. He was going to do a greatest hits show of his Free, Bad Company and The Firm work.

What would he be like? I saw Free a couple of times as a teenager and also Bad Company on their first tour. 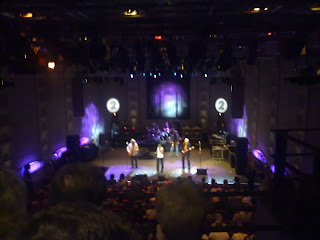 It can be tricky seeing an artist after a gap of nearly forty years. Would they be past their prime? Would they be unrecognisable? Would the songs sounds horribly old fashioned either instrumentally or would they be lyrically creaky.

Some 70's and 80's stuff no longer works for me due to the over-abundance of rather unsophisticated synthesisers. Just been listening to some early 70's Hawkwind sessions that they did for Radio 1's In Concert. All a bit studiedly, "far out and cosmic" for my tastes these days. That and the tracks are far too long to play on the show.

I remember rootling through a record shop a year or so back and finding an album by metal band, Samson. No chance whatsoever of "I wish I was the saddle on a schoolgirl’s bike" being played on the radio these days.

I do remember when as a schoolboy I played a track from a band called Stackwaddy. This predated punk and its attitude by several years. The album was called, Bugger Off, as I recall. Wonder if we would be allowed to mention that these days on the radio. 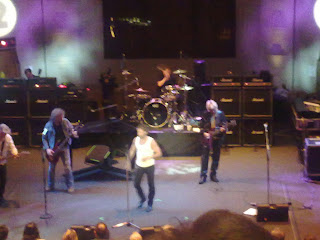 No worries with Paul Rogers who, despite turning 60, is in incredible shape and looks pretty much as he did when I saw him as a 14 year old. He was in fine voice and the band were note perfect.

K, despite being a few years younger than myself, really enjoyed them, and L Boy and I were transported back to a time when he had more hair and I had a 28 inch waist.

You can judge for yourself on Easter Saturday night when the show is being broadcast. There is also the red button after via the Radio 2 website so you can watch the gig as well.

It is now a month before American Adventure 3 starts, so I am drawing up lists of things to do to ensure that I can blog, tweet and you can also hear what is going on as I attempt to drive from Seattle to the Florida Keys then back up to New York in four weeks.
Posted by Alex Lester at 17:28

I think that anyone who drives across America not once, not twice but three times either has to be a really bad boy or mentally insane. I think probably the latter.

I think, after looking up unmentionable song or album titles, that you require a pint of F...ing Hell beer. http://bit.ly/bUgdxI (ACHTUNG: Some rude words, NSFW etc.)

I can see your point on some electronic sounds from the 70's and 80's, but for me, its timeless as its the music I grew up with.

I can't wait for the Audioboo stuff from the US! :)

That is cruel, offering your trousers to someone else. They would get laughed at instead.