I'VE BEEN ALL AROUND THE WORLD. BABY, I JUST GOT BACK

“So, you are having another Nerd Night and Charlie Jordan is going to be there.....is she still as tall?”

Short (sorry, cue Drums of Pun) of her suffering a terrible accident, Charlie is in fact a head taller than me. Also, she is younger so has not started the long inexorable slide back towards Tiny Town that people do after a certain age.

That is a thought to embrace; the height loss. Perhaps pensioners should affect short trousers and a water pistol to make themselves feel like it was the first time round. 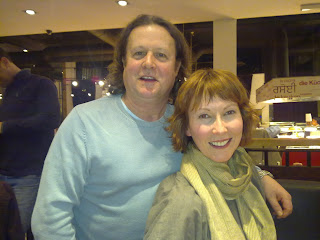 Nerd Night, as I have blogged several times before, is a terrifying meeting of Geeks that occurs within our industry every couple of months; a selection of DJs, producers, journalists and others in the Radio and TV industry get together to try and out-bore one another over food and drink.

It is becoming one of those events in the calendar that could soon be up there with the Boat Race and Royal Ascot. “We see Mrs. Shilling in the Royal Enclosure wearing another ridiculous hat....yes, it appears to be in the shape of a 45rpm disc.....I think its Juicy Lucy's version of "Who do you love" that reached no.14 in the charts in 1970. On the Vertigo label no lesszzzzzzzzzz”.

Normally, what happens is that loads of people say “yes, I’ll be there”, then realise how awful it is going to be so back out at the last minute, leaving the rump of Ubergeeks: “The Magnificent Seven”.

However, on this occasion we had an amazing turnout. About 20 people showed up which was excellent and a lot of fun to see the new faces.

The hapless city chosen was Birmingham. Having been born and brought up in the area and been at college in the city, as well as broadcasting The Best Time of the Day Show from there for 13 years, I am familiar with it and how it has changed during my lifetime.

It is now a hopping town which has suffered from comparisons with Manchester, Liverpool, Newcastle and Bristol and other major British cities in the past. It is unpretentious and has never been favoured by "style" nor "music" journalists, despite having an atmosphere all of its own.

Booked into a small room in a quite big hotel. 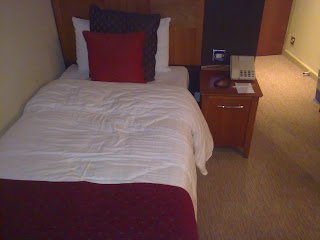 Then after a couple of drinks in the bar we headed off to Broad Street to a restaurant that Charlie - who knows food - had chosen. Around the World in 80 Dishes is an all-you-can-eat buffet.

Those four words, "all you can eat" are, of course, a challenge so I resolved to see how far around the world I could eat. Before bursting. That would be a cheap and effective way for impecunious students to spend a gap year. Instead of piling on the carbon emissions flying off to Peru for "good works" they could just sit at home with a recipe book and pretend.

Now, without being picky, I noticed a glaring omission in the premise, “Around the World in 80 Dishes”. Admittedly, they never say the diner will travel the world sampling cuisine from every country. I think Phileas Fogg may have been a mite disappointed with the “map of meals”.
The food was very good but I didn't count many nations.

There were burgers and hot dogs. USA.

A good selection of dishes from China

There were chips but they were labelled "French Fries" so that tagged them onto the North American continent.

Had they had three trays one labelled "Fries", one "Frites", and another "Chips", they could have ticked three or more countries. I say "or more" as you could include Belgium and their French-speaking colonies. Likewise Anglophone parts of the world.

Their website never makes the claim that it is representative of many countries, just that there is a large number of food items on its menu. 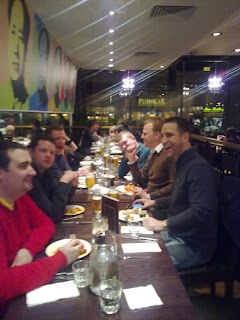 I suppose that good taste precludes them from putting certain things on offer. Plus, some would be rather difficult to source, I suppose.

"Got any Missionary?" 'Yup, you want South American rain forest cannibal style or Comedy 1970's Central African?" “Just past the shrunken heads next to the North Korean barbecued rats.” “Sorry, we are all out of Japanese Puffer fish but I think we've got some Monkey brains left.”

"Sorry mate, Pot Noodles are off."

I stuffed in as much as I could, visiting each country in turn so went from burger to lasagne to curry to wraps, including on the way some very hot and very red chilli shrimps. The sauce made a good dye as well. So my fingers looked like I had just voted in a third world election.

We headed off for a canal side pub called the Tap and Spile. Friday night in Birmingham city centre gets pretty crowded but we did manage to get a couple of hours in the pub before the nightclubs shut, as this particular boozer closed at 4am apparently, but the last two are probably bedlam. Security is tight which means that the boozer was policed by door-staff in high viz jackets who seemingly, no matter where I stood, moved me out of the way as I was blocking a fire exit.

It may have been the fact that I had shovelled so much food down me that I was suffering from an outbreak of "Gulliver". Went and stood outside on the canal towpath for a while to get some air, although I was surrounded by smokers.

It brought back a host of bitterwseet memories of my youth, and also when I lived for ten years on my canal boat "The Blue Pig", I was offered a residential mooring just by this pub in Gas Street basin. Thank goodness I never took British Waterways up on their offer choosing to live at Hockley Port a couple of miles away as the noise would have meant I would never had got a wink of sleep.

With that in mind we grabbed three cabs back to the quite big hotel.

The turnout had been pretty impressive, I reckon more than 20 dweebs made it which was terrific and good to meet a lot of new people. So far it had been a cracking evening without any overt Nerdiness. However, once the remaining ten of us made it back to the hotel the restlessness was beginning to show. It’s like a disease with these people.

When we had the previous outing to Brighton, the hotel bar stayed open all night, which was fantastic. We were promised that this place would do "lounge service".

What they actually meant was they had some bottles of beer and some soft drinks that they would go and get for us if we really insisted.

I pointed out that one of the conditions of us booking in the first place was that we would be able to have a drink when we returned.

My Paddington Bear "hard stare" as usual made little difference. So we managed a bottle of overpriced beer each and, bizarrely, some biscuits. 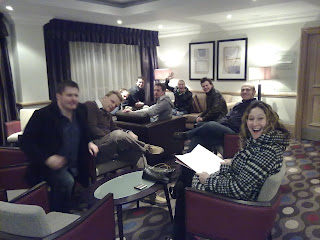 Little did the night porter realise that he was faced with ten mild mannered polite people who were stuffed to the gills with food from other countries. We were fully loaded.

A little tickle of the uvula and they would never have got that place clean!

Revenge came in the form of fellow radio nerd, Simon Hirst, an all around top man and terrible nerd.

He whipped out his mobile phone and suddenly we were in the middle of a chart related pop quiz.

Matthew Rudd, a freelance DJ, is the man you need if you are ever doing a pub quiz. I think he got every question right. He also knows and writes about football and TV, so he would be good with the sports and showbiz rounds too.

John Foster, from BBC Tees, after a shaky beginning statred to get a lot of the answers until we realised he had the same "app" on his phone too. So he was cheating.

Needless to say bringing up the rear was.....me!

3 o'clock arrived and I repaired to my small room and for the rest of the weekend the song "Just One More Night" by Yellowdog roared around my brain. That song being my one correct answer.

Still, I gather that Hirsty had "A Little Peace" by Nicole going round his. So there is justice.

That’ll learn him. However, I doubt it will.

Next one is slated for June in Liverpool. I bet there is a Beatles-related quiz.
Posted by Alex Lester at 21:30

Excellent Blog as usual Darklord. Suprised you didn't add Friendship Fries to your list of chips around the world. Next time a hotel refuses to live up to its billing you should send a 'LETTER' to head office telling them your hundreds of thousands of followers will boycott their hotel chain. Then again, maybe just stick to the Paddington Bear stare. Us truckers are on a budget after all. Steve

Oh dear, what has happened to blubber watch? After sampling 80 fast food dishes from around the world, I'm sure your girth will rapidly expand.
Unless you preparing for next trip to the USA?

Mmmmm, Alex the Bad on a Nerd night. We will all look forward to hearing the results next week on the "What's Alex been up to" slot.
Thanks for the advanced warning - so we can all safely hide inside whilst you lot get up to no good.
Grrrrrrrrrr.

Just found your blog DarkLord and nothing of surprise after listening to you for a few months.

Nerd Nights sound like fun. We do similar down here with some of the hospital radio volunteers; usually with curry, beer and a front room of aging not-so-slim DJ's and me.....

Hotels are notorious for being a potential for a newshanking. The HBA Conferences seem to do well though.

Translation: "Durk Lard, Where you hissed on your nerd night and had to slither home ... like I do?"