SO THIS IS CHRISTMAS

Think I have done everything I need for the big day now. So was able to devote some of the week and the weekend to "leezure".

Friday I was invited to a posh do so had to put my suit on which frankly seems to be a little tight at the moment. I think the dreaded "tailor moth" has been at work. If you are unaware of this little known insect, they tend to hide in the wardrobes of the middle aged as they like the mix of cloth on offer and remove strips of material for their nests. However as a secretive species they repair the items after they have stolen so that the hapless owner does not suspect and go after them with massive amounts of swatters and deadly chemicals.

I was taken to the Hilton in London for the "Music Publishers Association" 50th anniversary lunch.

Lots of tables, lots of food and wine and speeches from luminariees from the industry who I did not recognise but judging by their suits were important, and they talked about others who I had not heard of apart from Tony Hiller who co-wrote "Save your kisses for me".

Everyone was a lot of fun and one of the best things about it was the impatience of the crowd wanting to get stuck into the food and drink. The end result was to hurry things along by blowing up balloons and releasing them so they shot around the room with a selection of satisfying farting noises.

Hugh Dennis was the after dinner speaker who gave an amusing speech and his best joke in my opinion was probably non PC as it dealt in a regional stereotype: "Any one from Norfolk here?...yes? Give me six!"

Then a rather florid Tony Hadley took to the stage and after a false start a backing tape began and he gave a stirring rendition of "Gold" then left to catch a plane. We went to the bar where I was horrified to discover a glass of red wine cost a wallet-weakening £7.

Got talking to a load of people including a selection of excellent old jazzers, who talked about the old days and bands they had been in and musicians that we all knew, including Malcolm Mortimer who I remember from Gentle Giant who I saw supporting the film "Jimi Plays Berkely" at Bradford St George’s Hall in the early 70's.

Another few glasses, luckily bought by others, and it was time to leave as another office party was filing in. I discovered it was 6.30pm although it felt like about midnight.

Up with the lark and then one of those things that you can't legislate for. Putting my sock on and suddenly "ping" - my back went. Scarcely wrenching it lifting a car to help someone trapped underneath, nor saving children from a flood hanging from a branch with an arm outstretched. Told a mate of mine and he said "this is the way it’s going to be"! Thanks!!

Went off to Hastings on Saturday morning by train, saw some friends in the evening and had a conversation with a man who had obviously been in the pub a long time. "what time you working in the new year Alex?" ‘2-5, then it will be Sarah Kennedy’. "Who will be on after you?" Sarah Kennedy. "What time is Sarah going to be on?" 5-7. So who is on after? Chris Evans. "What time is Chris Evans going to start". This went on for some time. Never sure what to do under the circumstances as it is always good to be polite but it can be teeth-grinding.

According to the travel info I saw trains running normally back to London on Sunday although no one had thought fit to tell the train operators or perhaps the public or perhaps somebody who knew who to talk to. No trains had run all day due to the weather so had to get he bus to Tunbridge Wells where the trains we were told were starting. When we arrived we were told that none had run all day and it was Tonbridge, two stops further up the line and we had to wait for a connecting bus. Then there was the wait at the station until the train eventually arrived. So it was a cold and rather irked me that made it back to the rental flat in London after 5 hours in transit. Compared to many of you I had it easy.

Sent all the cards off in advance and on time and so far have had only one from someone that I didn't send to. Odd as I thought we were both dead.

Family Xmas is well organised so have bought the cheese and biscuits as I am cheese monitor. My Dad is wine monitor, my sister does the cooking and it’s always marvellous and my brother in law does the washing up. This way no one ever gets too stressed which is a boon for a relaxing festive season.

Presents are wrapped and so it is time for me to go until next week.

Merry Christmas and here is hoping for a happy and peaceful new year to one and all.

My thanks to you for making the "shoe" what it is with all your input over the last 12 months and also very special thanks to the superb production skills of Andy Warrell and Simon Tester.

Unsung heros of the backroom so I thought it was only right that you should get to see and admire them: 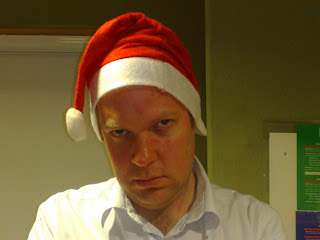 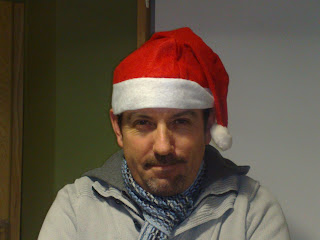 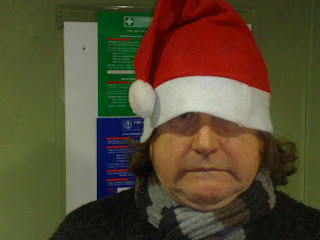 May the shoe go from strength to strength. Merry Christmas one and all.

oh my god WE ARE THE ROAD CREW by motorhead jumped in to my mind when i saw photos ! nice blog may we all rock n roll into 2010 at new time
love the shoe and hats
moggy

Happy New Year of Shoes to one and all!

In Chinese astrology they are re-naming 2010 The Year of the Shoe - did you know?

Already looking forward to your reports on the 2010 US trip - the Travellin' Shoe. ;-)

I recently came accross your blog and have been reading along. I thought I would leave my first comment. I dont know what to say except that I have enjoyed reading. Nice blog. I will keep visiting this blog very often.