Whilst most were enjoying an extended, and well deserved Xmas break, the "Best Time Of The Day Show" continued cranking it out. However as this is scarcely what can be termed a ‘job’, I’m not going to go down the “poor me I only had one day off over Xmas, woe, woe”, route.

I have ‘worked’ over Xmas on many occasions during the last 30 years. Perhaps one of the most memorable was when I worked at a small station in the North East in the 80's. On the 25th there was just me and the newsreader; no-one else in the building. The Managing Director in an attempt at bonding, decided to come in to give us the compliments of the season. He duly arrived with a box of 6 mince pies. However there were two missing, as the half hour drive from his palatial country home, had caused him to become a little peckish!

After that morning’s programme, I returned home alone and had decided to cook myself the full main course of turkey and all the trimmings. A tiny turkey for one looks like a baby when you dandle it over the tin! The tin was actually too large for the oven so I had to place the bird on the lid of an ovenproof dish, (It was that small!). Whilst it was taking its several hours to cook, what did I do? Queens speech? The Great Escape? Open my presents? Nope I tiled the bathroom.

I was obviously not in the right frame of mind. Some weeks later when I had somehow managed to lure a woman back to my place, she called to me whilst having a bath and said: "Look at the pattern in the tiles?" She was right. The pattern left to right read: "down, up down, up, down up, down down, up!" Also, after all that work and cooking the turkey dinner for one, it took four hours to cook and only 5 minutes to eat. Merry Xmas!

However this year things were different. Since my mother died back in 2002, my sister has taken on the mantle of doing the-do. She had a great tutor and it is an acme of what a stressfree day should be. I provide a small selection of cheese and biscuits. My Dad brings a couple of bottles of wine. Nell does the cooking and John my excellent Brother in law does the washing up. Now that is teamwork! I turned up at about 11am and my Dad arrived about five minutes later. Here is the Lester/Jones recipe for the perfect day: 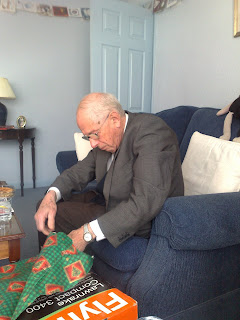 Big blow out meal with everything. This means ‘pigs in blankets’ two types of potato and three veg. Bread sauce, stuffing, gravy. Nothing is forgotten. Crackers with the usual terrible jokes: "What do you call a trembling ship at the bottom of the sea? A nervous wreck!" Nope - as I type, it still isn't funny. Xmas pudding, trifle brandy butter, custard. (My brother in law John is the world’s biggest custard aficionado, so it has to be spot on!) 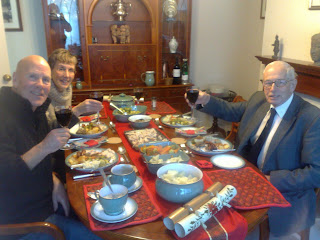 Along the way we have laughed a lot. Told stories, many of which we have heard before. There have been family jokes. We have spoken to relatives on the phone. It has been warm, unstressed, and above all, I am grateful for having such a terrific family.

As far as the loot was concerned, I was delighted to receive a laminator from my sister and brother in law. The reason for this will become apparent in 2010 as I have been ‘up to something’, over the past 12 months, and this will help in the future. I shall keep you informed. I promise!

This year’s bizarre gift was from ‘Pina the Filipina’ who I have mentioned before as we often go to gigs together, although she does have a curious musical taste which varies from dance to ‘X Factor’ contestants. She decided what I needed was a huge penguin. 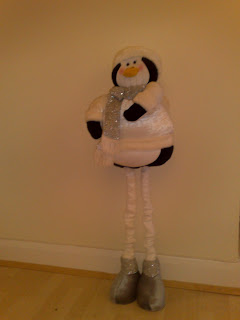 Judging by this monster she has been secretly listening to the show for years. As you can see it has all the hallmarks of a ‘Best Time Of The Day Show’ penguin in that it is wearing a scarf! This became a feature of the programme some years ago when a friend of mine’s seasonal good cheer was replaced by festive pedantry due to the large proportion Xmas of cards he received, which depicted penguins wearing scarves and bobble hats. “They have blubber. They evolved to cope with the cold. They don't need to wear hats and scarves!!!"

This is the last blog of 2009. I hope you have had as good a time as I have over the last 12 months. There are changes afoot soon which I hope we can both cope with. More on that in a future post. Above all thank you for your continued support without you the whole exercise is one in futility I do appreciate all your input.

Enormous thanks also to Simon and Andy for their hard work and their unfailing good humour. Have an enjoyable and restful holiday season. See you on the other side! (By that I mean 2010. Who do you think I am Derek Acorah???)
Posted by Alex Lester at 23:41

happy new year mate. hope it's a good one

WELL HERE WE ALL ARE 2010 OR COLIN i think we should call the year !
thanks to alex and famliy for a look into there christmas day LOVELY have a tear in my eye
i note you set out table as mrs moggy and me do great stuff
anyway up we all look forward to alex lester show going on and on forward in radio
did you all know that alex lester show won the this years MOGGY award
best show on bbc radio 2 i did not vote in it just made the award
LOVE THE SHOE
MOGGY XX

Changes afoot? That sounds ominous,let's hope it's good news. Anyway, a happy new year to all.
Love the shoe!

Happy New Year to you too.

The best radio DJ around by far !

Hope these changes don't mean I need to reset my alarm - a girl needs her beauty sleep, you know.

May have to discover the wonders of listen again and run a day behind the rest of the world - not for the first time.

Happy 2010 to the shoe team and bloggers. As they say north of the border, Lang may your lum reek. It's clean - honest ;-)