The weather may be variable but that doesn’t' stop me from realising that summer is here. In one of my American Adventure blogs I mentioned that an obvious difference between our two ‘cultures’, is their insistence on looking for the good in things. - (Unless you are a gun toting white supremacist of course. In this case the glass is not half full or empty it is just plain empty and it is people with a different pigmentation who are obviously to blame for emptying the glass in the first place.)

We, on the other hand, jump backward through flaming hoops to wring the negativity out of events. With this in mind as we approach June 21st which is the longest day, we are ready for the onset of the gloomy thought process which begins with: "Ohh nooo the nights are drawing in, now it will soon be winter". However in the U.S their view is: "June 21st! Cool it’s now officially summer time". So as we have been saying on the show all this year, despite gloomy economic forecast and a terrible slump, MP's fiddling their expenses and don't even get me started on the BBC….! we are a beacon of light in a dark world and refuse to be downhearted no matter how odd it may appear. We are trying to see the good in everything which admittedly can be a mite tricky at times.

So as it’s now the onset of summer, I realised it was that moment where wardrobe change occurs in the Lester household and last years dodgy cheap sandals are replaced by the new seasons offering. (Trinny and Suzannah, Gok Wan et al take note; they are the same as last years. They are very cheap and I don't care what you think.) 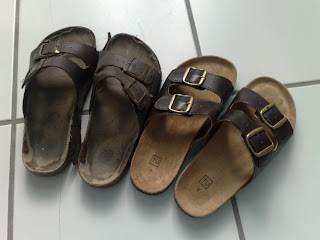 I have taken the new shoes for a couple of trips in the park and they seem to do the job admirably however if I walk too quickly in them I can feel the onset of shin splints. Give me a few miles and they will be broken in and ready and raring until the autumn. The added advantage of this mode of footwear is there is no need to raid the sock drawer (unless you are a Vicar or Scoutmaster). So less washing and wear on the hosiery means the "Cotton Rich" can keep safely grazing in their fields before they are turned into "socks black for the use of" by a selection of sweat shop workers in the Far East.

Another advantage is that it’s less of an effort to climb into them at 01.30am. I have been getting up at this time solidly since 1992 and have been working nights in one form or another since 1986 so I think I have it down to a fine art. The concept ‘less is more’ - if you’re a night worker you may sympathise. Up and out the house with the minimum of fuss and unpleasant bending. So no laces, no buckles and no miles of buttonholes. If I was brave enough I would opt for a one-piece jump suit in say a modish and high visibility orange, along with the cheap slip on shoes. Hmmm now where have I seen that uniform before….?

One radio station I worked at years ago the Managing Director said that everyone had to dress smartly…. and in suits so as to create a good impression should prospective advertisers be shown round the building. It was very unlike another station I had worked where in my contract it stated: ‘Presenters are allowed some eccentricities of dress.’ The MD was adamant that suits it had to be. I can still see the look on his face when I arrived wearing an old brown boiler suit. I am sorry being childish and pedantic all at once, but I pointed out that he never said exactly what type of suit had to be worn. Soon afterwards that regulation was quietly dropped. Which brings me back to the BBC via my first ever report on my progress as a boy broadcaster in 1978 which stated: ‘Alex shows flashes of maturity that I hope he will develop’. 31 years later and err…. the jury is still out on that one.

Home at the weekend to a glorious sunny south coast so with the fleshpots of Hastings and St Leonards-On-Sea at my sandal clad feet there was only one or two options for a young man about town like myself: telly and the spare bedroom. 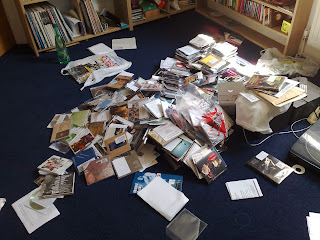 Fridays are always a bit of a wipe out due to the cumulative effect of 5 nights on the show. So the start of the weekend usually comprises a trip to the pub with the newspaper, takeaway and the TV. Trying to catch up with all the stuff I had recorded and not had time to watch during the week. I watched the third and final instalment of a weather documentary on BBC 4 this time "SNOW". Yes, back in 1991 I think it was, the railways came to a halt because of the wrong type of snow. Widely jeered at by the press and pubic alike, it was demonstrated that there are in fact many different types of snow and this particular type had short circuited the electric motors of the railway locomotives. So we now sit corrected. However, leaves on the line though we can still jeer at.

Not sure if you do this, but many is the time I wake up drooling on the settee with the TV suddenly tuned to "Sexcetera" or "Babe station". Not through choice, he added hastily. Although I am not entirely sure of the attraction of a selection of marginally attractive bottle blonde women exhorting blokes to part with their hard earned cash to get a mention on these programmes when the sound is appalling and echoey and a load of texts scroll along the bottom of the screen: "Gaz says show us yer bum". How did I get onto this. Ah yes I know. In the morning I return to the beginning of the programme I nodded off during and spool through it until I discover the bit where I don't recognise the plot any longer. It would appear I fall asleep in about 20 seconds. A recent documentary on the Blues had me nod-off within moments of a piece of archive footage of Son House.

Saturday and the sun was out so, as I have people coming to stay this weekend, I needed to tidy the house so I rushed around with a vacuum cleaner. White tiles in the bathroom show up just how much I moult! Then I realised I had to file all the CD's I had bought, been sent, and had played and not returned to the shelves. The little pile pictured above went back to March that is how lax I have been. How long did it take to file that little lot to its alphabetised place? Three long hours. I am realising also that I am running out of shelf space. By the end of the year it may be time to call Mr Tibbs the carpenter and get him in to make me a CD ‘island’ in the middle of the room. That should keep me going for another couple of years.

Not sure where you got the crazy idea that Americans always look for the good in things. Personally I always do but sadly most people I meet don't. They gripe about anything and everything.

I need to correct you on something. We think of Memorial Day weekend (which is the last weekend in May) as the beginning of Summer. At least here in Chicagoland we do. From mid October to April it is usually cold here so when it gets the least bit warm we consider it Summer. That way it seems longer.

Glad to know that Billy Joel has a place on the shelf instead of lying about on the floor. He is an American icon ya know!

What on earth were you doing with a brown boiler suit in the first place? Have you no shame man? Alright, asked and answered.

Talking of summer clothing, has anyone else noticed that men and women - particularly those who are no strangers to the finer things in life - take a totally different approach to summer clothes? Women go to great lengths to cover up those less toned areas of their midriff while men adopt the proud "look what I grew" approach. Oh well, each to their own.

I don't know what part of the world you live in but here in America unfortunately that statement of 'women go to great lengths to cover up those less toned areas of their midriff' is not true. I've seen things that have made me want to burn my eyeballs out of the sockets...hahaha.

"Looking for the good in things" - as a Brit immigrant to these US shores I haven't quite got that one honed to perfection yet. Especially with regard to the summer here in the southwesterly part of mid-landmass. Too hot, too many bugs, tornadoes, too many allergies....I'm definitely in the "nights are drawing in", "all downhill from here" club.


Would you mind sending Mr. Tibbs to our house when he's finished in your spare room? The husband's record collection has overpowered every shelf and closet in the house and garage!

Always look for the good things. If your glass is half full, it means there is room for more beer.

In winter, how good is it to come home out of the cold to a roaring fire (alright you might have to light it first), and curl up with a pile of books you haven't had time to read all summer, with some smooth, mellow tunes on in the background? Mmm, life is good!