Time and inertia are a constant battle with me. So here we are a week after the holiday eventually blogging once more. Apologies for the delay. A thin excuse that was used on the show concerned the fact that I had forgotten the lead from my camera phone to the computer. Andy the producer came up with a "politician’s excuse" for the lack of application on my part by ordering me to tell you that :

"In order to uphold the quality of the material we are minded that the new blog should be postponed until next week. This will ensure that our usual high standards are maintained" .

A career in Government awaits that young man!

Excuses over. Beginning of the holiday started with a couple of gigs. The by now legendary "Libido Boy" came to stay and we trooped off to the University of London to see Icelandic singer Emiliana Torinni. She was late arriving on stage due to being "stuck in the wrong dress". Which as excuses for lateness are concerned takes some beating. She was excellent and a high spot was her rendition of "Jungle Drum" which I had featured on "Lester's library" a couple of times and eventually made the Radio 2 playlist. Just before the end however, a rather large lummox of a student lumbered in front of us much to Libido Boy’s annoyance. ULU is a standing-only venue and as I have mentioned in the past, being short, this creates problems. Libido Boy was fuming and was about to tap this boy-mountain on the shoulder in order to tell him to get out of the way. I intervened and pointed out quite reasonably and with self-preservation at the heart of the matter that it was probably wise to let the matter drop as it was the last number and also the guy obviously had suffered enough as he was cruelly deformed, so we should make allowances. For some reason one ear was situated far higher on his head than the other so he was affecting a bizarre retro 80's slight ‘Phil Oakey / Human League - long one side, short the other’ hairstyle to compensate and disguise the higher ear. Not wishing to be killed taking a photo of this bloke, I have reproduced here my interpretation of his back view from where I was standing. 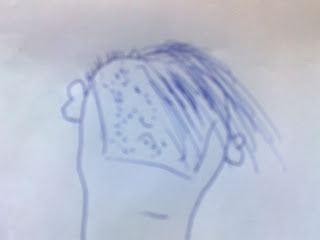 After the gig it was off to the pub where we linked up with TV Trish, my television announcer friend, where we had beer and crisps. Libido Boy’s eyes started to twinkle but before he could pounce it was last orders and we had to go.

Monday and it was off to see Sugarland. Suffering as I do from a "Napoleon" complex - I think it is height related - I am now going to make the wild and extravagant claim that after bringing back Sugarland and Taylor Swift albums from my American Adventures to play on the show (the blogs are still there by the way) it is I and I alone (see what I mean) who is responsible for their success : Taylor having had a top 5 album and single and Sugarland deciding to dip a toe in the UK waters by coming over to do a couple of gigs.

Went with my friend Clair from the Sunday Express who is a terrific writer and does a very funny and acerbic blog called "The Urban Woo". She is like many a "country sceptic" however she really enjoyed the gig and we ran into Radio 2 producer Al Booth there as well who knows far more about the genre than I do. They were terrifically energetic, a great band and - unusual for American artists that I have seen lately - no mention of politics at all. Even more surprising for a country act - no mention of God either. They did a wonderful cover of Dream Academy's "Life in a Northern Town". 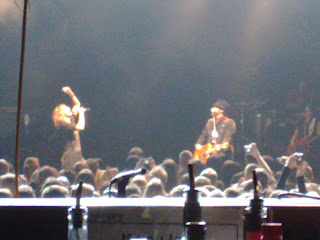 Then it was off to France for a few days to see some friends of mind including "The widow Edith" who is great fun despite not speaking a word of English and me still - despite my many visits -having comedy French that would make Officer Crabtree out of ‘Allo ‘Allo sound like a native. She was not her usual ebullient self having just had her second knee replacement operation. The first one was a breeze so she was a bit downcast and in some pain as the second was not as straightforward. I thought that perhaps if I explained that "you should have had the second one first. That way the one you have just had would have been a lot easier" that may bring a little levity. Looking at her face and examining what little grammar I had at my disposal I thought it easier to give her a tin of chocolates instead.

The weather was terrific, bearing in mind it usually rains constantly, and it was soon time to return. My sister had put in a request for some beer. People in the office also wanted a few things so the car was full of goodies for others when I returned, including a bottle of wine for Bob, the new Controller of Radio 2. I shall place it on his desk like an apple for teacher.

Went up to see my Father which is always fun as he leads a particularly active and full life so much so that we have to book an appointment as he is usually doing something more interesting. This is a man with always a dozen projects on the go. One small side project is that he is working his way through a 157 CD boxed set of works by Brahms I think. A form of music that to his chagrin I don't "get". Then again he is not big on Cartoons or the TV, full stop. I knocked on the door and got no reply. Then I remembered he was up in the loft clearing it out. Rang the bell loudly and a dust-covered figure opened it. 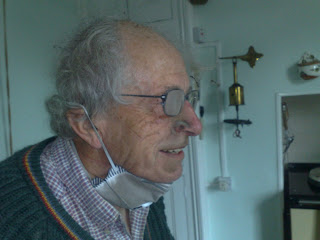 I remember thinking that’s not my lovely Dad, that is Hubert J Farnsworth from Futurama!
Posted by Alex Lester at 07:28

Sounds a bit like a Busman's Holiday for you.

There's a very big resemblance between you and your Dad, Alex. Both have somewhat unkempt hair, and the 'Lester' nose!

Nice to see you back, Alex!